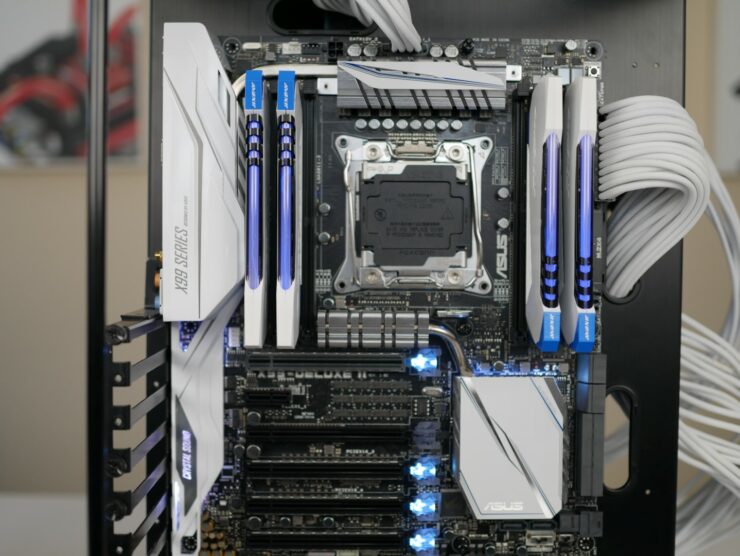 The entire ASUS X99 Motherboard refresh for the upcoming Broadwell-E processors has been leaked. The new lineup includes several additions such as the ROG STRIX X99 Gaming, X99-Deluxe II, X99 A-II and X99 E which will be available to purchase later this month. The new motherboards will provide a ton of features to overclockers and enthusiasts who will be running Broadwell-E HEDT CPUs.

ASUS's incredible X99 lineup for the next-gen Broadwell-E HEDT CPUs has been unveiled.

While Intel's latest Broadwell-E processors will be able to work with existing X99 motherboards with a firmware update, board makers will also be launching new series and products with better features and support for the latest I/O, storage and connectivity capabilities. All new motherboards will be running the X99 chipset and feature the LGA 2011-v3 socket which will support Haswell-E and Broadwell-E processors. 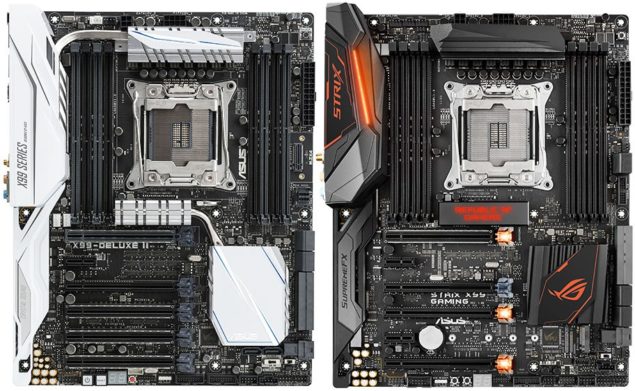 The ROG STRIX X99 Gaming and X99 Deluxe-II motherboards are the beefiest designs from ASUS to date.

We will start off with the most powerful product based on the Republic of Gamers design that ASUS plans to introduce in their latest ROG STRIX X99 Gaming. The ROG STRIX X99 Gaming comes with the monochrome theme which ASUS has started using as of recently and looks splendid. The motherboard uses an orange and black color scheme which gives the copper touch to this product. The product comes with RGB lightning so users can change the colors over the I/O panel and internal heatsink lightning with ease. 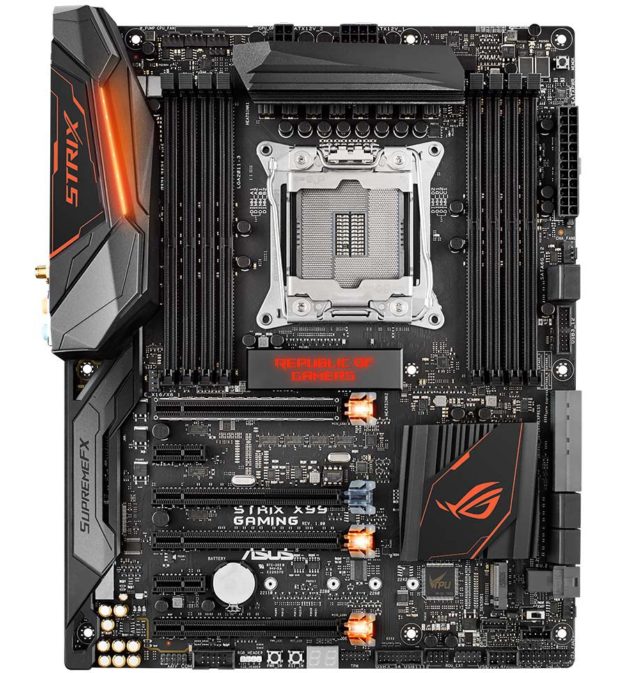 While the Signature series sticks to a reserved monochrome colorway, the ROG Strix X99 Gaming dares to be different. Its blacked-out board is punctuated by neon orange decals that echo the copper accents of some of our new ROG products. We include three sets of decals in different colors, so you can change the look to match the rest of your system. Additional RGB lighting around the I/O shroud and central ROG badge adds to the customizable appearance, making the Strix perfect for modders and gamers who want to define their own style. via JJ @ ASUS

The motherboard features an 8 Phase Digi+ III VRM which is powered by a 8+4 Pin power connector. The board has a total of eight DDR4 DIMM slots which are capable to run memory with speeds of up to 3333 MHz (O.C+). Expansion slots include four PCI-e 3.0 x16 (x16/x8/x16/x8 electrical), two PCI-e 3.0 x1 slots and an M.2 slot right at the bottom of the PCH heatsink. It is interesting to note that PCI-e expansion slots come with small LEDs that can also be configured using RGB effects. Storage options include 10 SATA III, 1 SATA Express and 1 U.2 ports.

On the I/O side, we are looking SupremeFX audio that provides a 7.1 channel high-quality jack. There's Gigabit Ethernet and 2x2 802.11ac Wi-Fi Bluetooth 4.0 connectivity. The motherboard comes with several USB 3.0 port including a USB 3.1 (Type C and Type A) port. There are two internal USB 3.0 connectors and several fan ports which allow dynamic fan speed adjustment based on their positions. The STRIX X99 Gaming motherboard will hit retail at a price of $339 US. 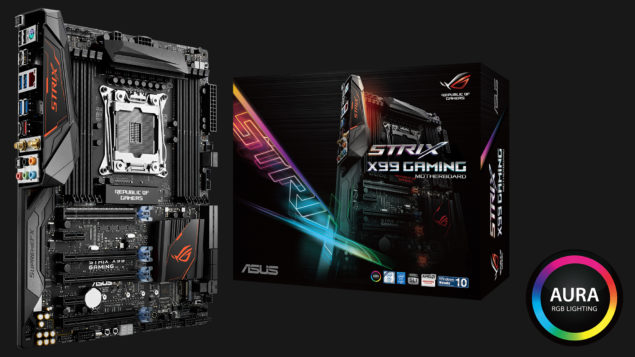 Next up, we have the ASUS X99 Deluxe II motherboard which is part of the signature series. This motherboard sticks with the classic black and white color scheme that ASUS started using on the first X99 motherboards back in 2014. Featuring a large heatsink array that covers almost every component on the board and connected via a heatsink solution, the motherboard not only looks great but should perform well too. 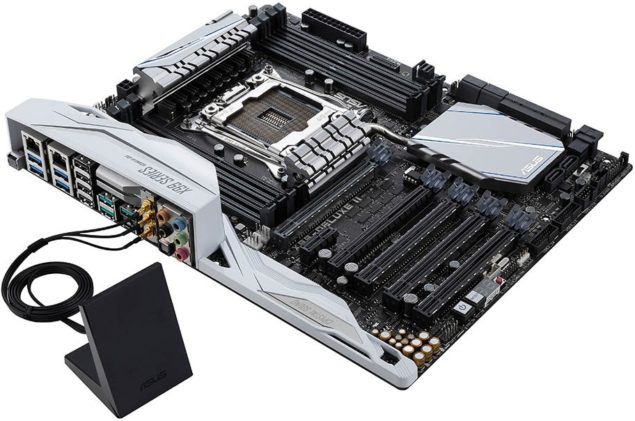 The ASUS X99 Deluxe II has the same 8 Phase Digi+ III VRM design that features high-quality components to ensure the best stability and overclocking to users. The board has a total of eight DDR4 DIMM slots which are capable to run memory with speeds of up to 3333 MHz (O.C+). Expansion slots include five PCI-e 3.0 x16 (x16/x16/x16/x16/x8 electrical) and a single PCI-e 3.0 x1 slots. ASUS doubled on total U.2 slots available. Storage options 10 SATA III ports, 1 SATA Express port and a two U.2 slots. There's also a low-profile HyperX M.2 x4 card that lets M.2 SSDs connect via PCI Express expansion slots.

The I/O connectivity is loaded with ports that include four USB 3.0, four USB 2.0 and four USB 3.1 ports. There's dual Gigabit Ethernet ports and a wireless (WiFi + Bluetooth) combo device which could be used with a bundled dock that ships with the board. The price for the Deluxe II will be $419 US at launch.

We also have the X99 A-II motherboard which is part of the Signature series. This motherboard is more of a cost effective solution that retains the design of the X99 Deluxe-II but tones a few things down. The board features a similar heatsink layout with the I/O, VRMs and PCH hidden beneath aluminum blocks. 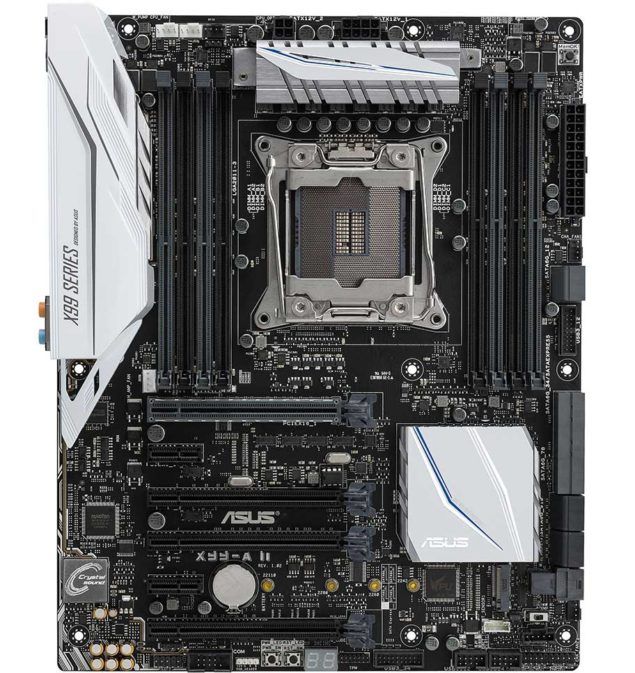 Finally, we have the cheapest board of the ASUS X99 Broadwell-E family which will be shipping at a price of $219 US. The ASUS X99 E (E for Entry) is a budget tier board that packs a lot of punch. It comes with a 8 phase VRM design that is covered by an aluminum heatsink. The eight DDR4 DIMMs can support memory with speeds of up to 3200 MHz (O.C+). 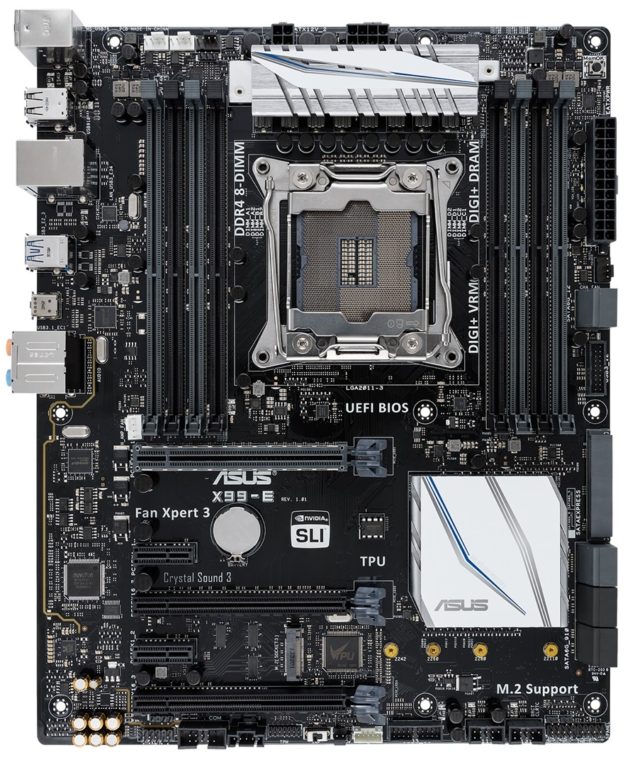 This new entry point to the X99 Signature series brings most of the bells and whistles of its siblings down to a more affordable price. At $219, it’s a great option for anyone looking to adopt Intel’s high-end desktop platform on a budget—and without sacrificing the essentials. The X99-E takes full advantage of the platform’s copious PCI Express bandwidth, using it to fuel a trio of x16 slots with support for three-way CrossFireX and SLI configs. Only one of those is embedded with SafeSlot metal reinforcements, but they’re all anchored with additional solder points to prevent separation due to rough handling. via JJ @ ASUS 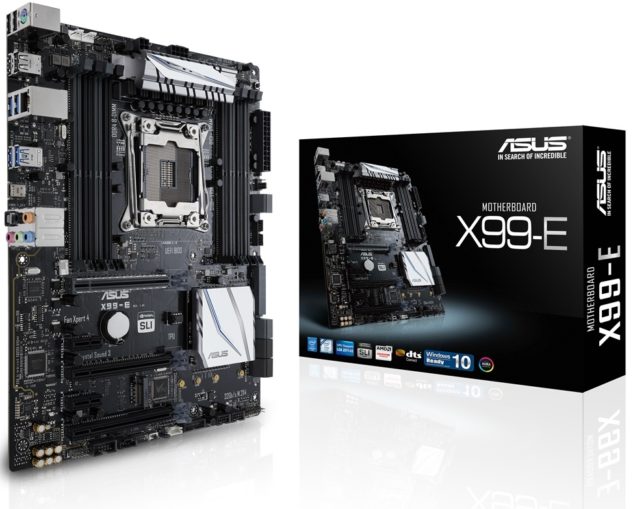 It has three PCI-e 3.0 x16 expansion slots, two PCI-e 3.0 x1 slots while storage include 10 SATA ports, 1 SATA Express and a single M.2 port. The motherboard has a range of I/O connectors such as USB 3.1 Type-C, USB 3.0, a high-end audio jack powered by ASUS's Crystal Sound 3 and a Gigabit Ethernet LAN connector. Expect these motherboards to hit retail in a few weeks.