The Broadwell-EP family is based on the Broadwell architecture which is a highly scalable design. It is built to accommodate low-energy 4.5W SKUs and all the way up to 160W workstation chips that are launching today. The Broadwell-EP family comprises of several SKUs with the flagship product featuring the highest core count for any Intel processor to date.

The new family delivers up to 44% better performance in application benches used to test out the next-gen processors. The scalability of the new family allows Intel to offer several dies on the same chip architecture which has been the scheme since the last generation of E5-2600 families.

The entire family will be compatible with existing platforms and will run across the consumer and workstation class boards based on the LGA 2011-v3 and R3 sockets (C612 and X99 Chipsets).

Talking about technical details, the Broadwell-EP Xeon E5-2600 V4 is an insane family with up to 7.2 billion total transistors packed inside a 456mm2 die. It should be noted that the last flagship chip in the Haswell-EP lineup in 2014 featured a maximum of 18 cores with 5.69 Billion transistors on a massive 662mm2 die. The 14nm process allows Intel to significantly cut down the die size while increasing both transistor count, core count and the IPC performance. 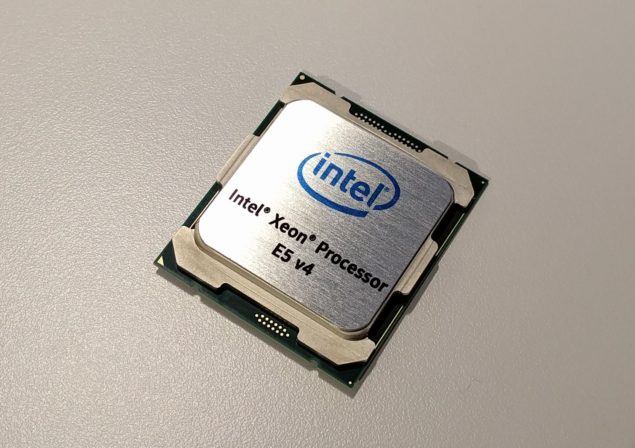 With 22 cores and a multi-threaded design offering 44 threads, the chip packs insane CPU performance. With 2.5 MB cache scattered across each core, the die packs 55 MB L3 cache and is clocked at a range of 2.2 GHz base clock and up to 3.6 GHz boost clock. The entire chip has a TDP of 145W with workstation offerings of the chip going up to 160W. The new processors also deploy the latest AVX/AVX2 instructions with up to 22 levels of boost clocks.

Surprising thing about this launch is that Intel is directly pitting their Broadwell-EP processors against the IBM Power8 parts. It looks clear that Intel considers IBM as their only competition in this high-performance sector and according to the slides, Intel's products are vastly superior than IBM's solution with 34% increase in total performance which also offers 4 times better performance per dollar value. The Intel solution also consumes half of the total power of an Power8 chip. 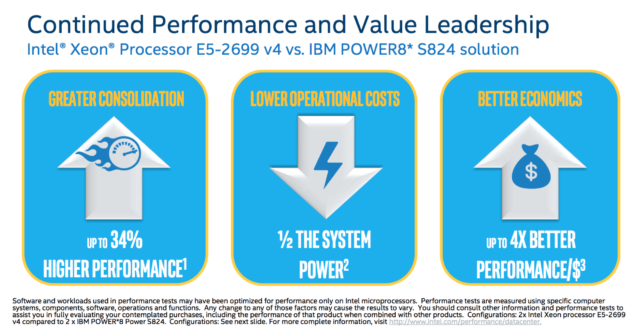 Intel's flagship Xeon E5-2699 V4 chip is currently offered at a price of $4115 US while the entry level chip can be purchased for $217 US. Given the high-performance specifications of these chips, they can also work with Intel X99 platforms which are aimed at high-end desktop consumers. It makes sense to offer these on HEDT platform since it can support the brute nature of the workstation class processors. OEMs such as HP, SuperMicr, Lenovo  and Dell are already offering new systems with Broadwell-EP chips.

Benchmarks from Serverthehome reveal that two of the top-end Xeon E5-2699 V4 chips perform very similar to quad Xeon E7-8870 V3 chips and sometimes even surpass the quad rack solution. The Xeon E5-2699 V4 chips blow away the Haswell based parts in single threaded performance and with just 44 cores and 88 threads, the solution is able to deliver performance on par to a 72 core and 144 thread solution which is impressive and that too being a Xeon E7 enterprise solution. Intel has really shown their performance lead in the workstation sector with the launch of Broadwell-EP family and they will further secure performance number leads with the next enterprise E7 V4 launch which will allow up to 8 socket solutions.