Several motherboard manufacturers have previewed their upcoming X99 motherboards for the Broadwell-E. We previously saw ASUS, EVGA and MSI products. Gigabyte has also come forward to preview their own X99 motherboards which include the X99 Designare EX, X99 Ultra Gaming and X99 SLI Phoenix. Aside from these motherboards, MSI has also teased their grand X99S XPOWER Gaming Titanium motherboard which will be launched at Computex 2016.

The Gigabyte GA-X99 Designare EX motherboard is a top-notch motherboard featuring some beefy specs and feature list. It’s fairly easy to tell that this board will be aimed at enthusiasts and would come at price that will put a dent on your wallet. The motherboard comes in a E-ATX form factor and is a big motherboard. I can note that there’s a 8+1 Phase PWM supply that drives the LGA 2011-3 CPU socket and power is provided through a single 8-Pin connector.

A total of eight DDR4 DIMM slots are featured on the motherboard (4 on each side) which will allow fast DRAM (OC) support. The whole motherboard features a large heatsink array that is fitted with heatpipe cooling which does help keep the temperatures down across the power delivery system and PCH. Gigabyte has went with blue and white color scheme for their Designare motherboard which looks pleasing although it does remind of the X99A-Deluxe from ASUS. The motherboard features RGB LEDs and a new feature called Ambient Surround LED which let's you customize the colors on various points of the motherboard. RGB lightning is becoming more and more common on next generation boards. 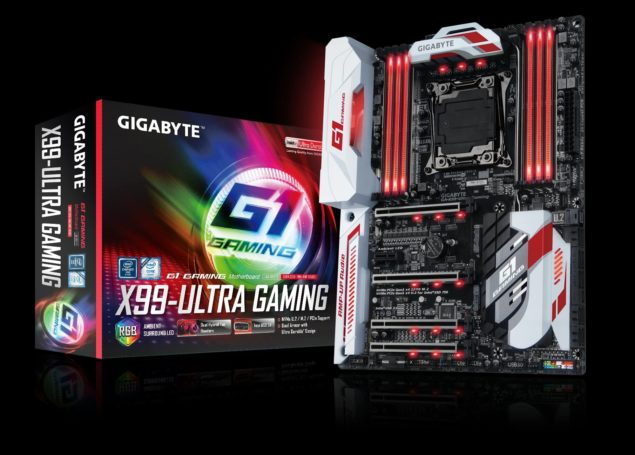 The Gigabyte is the GA-X99 Ultra Gaming is a feature loaded yet cost effective solution. Maintaining design similarities with the Designare EX and adopting a red/white color theme, the X99 Ultra Gaming features four PCI-e 3.0 x16 and a single PCI-e 3.0 x1 slot. The two M.2 slots are found in the middle and don’t feature any add-on card. There’s a single U.2, SATA Express and 8 SATA III GB/s ports for storage. Gigabyte has marked the devices which will be compatible with both M.2 ports.

Each expansion slot is shielded by a metallic body that gives strength to the slot when using big graphics cards. This motherboard also comes with RGB lightning and a integrated heatpipe cooling solution that extends from the VRM to the PCH heatsink. I/O on this board includes a PS/2 port, 5 USB 3.0 ports, a USB 3.1 (Type-A) and a USB 3.1 (Type-C) port. There's no wireless add-on card but placement for the antennas output is featured so users can easily equip them to the board. There are dual LAN connectors and a 7.1 channel HD audio jack.

The MSI X99A XPOWER Gaming Titanium motherboard will be the most glorious motherboard of MSI's X99 line. Featuring an impressive design scheme which will be retained from their Z170A X99A XPOWER Titanium board, the motherboard will feature the LGA 2011-3 socket to house the Broadwell-E processors. The board is going to feature a white PCB with metallic silver heatsinks that look amazing. MSI will also be topping an integrated back lit lighting system for those who prefer the lighting display.

The motherboard packs the Military Class V components and features a powerful delivery system to allow for best overclocking on air and LN2 cooling. The motherboard can support DDR4 memory with speeds of up to 3.6 GHz. Expansion slots include five PCI-e 3.0 x 16 and a single PCI-e 3.0 x1 slot. There's also a Ultra M.2 port. For storage, the board features 6 SATA III, a single U.2 port and dual USB 3.0 connectors (right angled). We can not wait to see this motherboard in action at Computex. 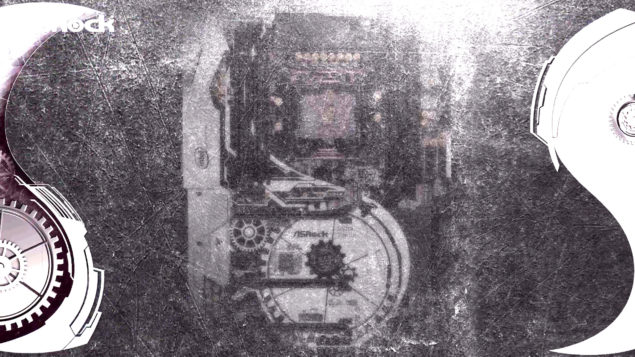 A few weeks ago, ASRock also teased their X99 Taichi motherboard which is an ultra-enthusiast product designed for the Broadwell-E family. ASRock has posted a teaser video which gives us a small glimpse of the motherboard. For more details, you will have to wait till Computex which is just a couple of weeks away.