Power ratings for Intel Alder Lake-P & Alder Lake-M mobility CPU lineup have been detailed in the latest Coreboot patch for Chromebooks as discovered by Coelacanth-dream. The patch lists down power limits for the 12th Gen mobility family based around the ADLRVP (reference validation platform) & also the standard notebook ratings.

Do keep in mind that the maximum Intel Tiger Lake-H chips can hit a PL2 rating of 135W so a 115W rating for Alder Lake-P shows a slight reduction. Both PL2 and PL4 ratings are based around the max opportunistic clock speeds which only last under 10ms (PL4). These ratings are specific to standard laptop configurations, the Alder Lake-P Chromebook reference board ratings are even lower and are listed below:

Do note that these core count configurations are valid but not final for each specific SKU. Those might change but all chips will pack a similar die hierarchy. The actual power limit will depend mostly on the OEM based on their cooling and PCB designs for each specific Intel Alder Lake mobility chip.

The Intel Alder Lake-P45 series will come with up to 6 big cores and up to 8 small cores. All three feature GT2 GPU with 96 Execution Units or 768 cores. The U series looks to be put in mainstream and performance laptops featuring Tiger Lake processors. The H series looks to be a direct replacement for Tiger Lake-H35/45 series which is in portable gaming and enthusiast laptops. 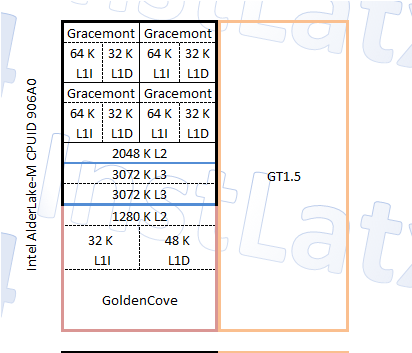 The Intel Alder Lake Desktop lineup and the Z690 platform are expected to launch on the 27th of October & will be the first mainstream consumer platform to utilize PCIe5.0 and DDR5 technologies along with a new hybrid architecture approach, something Microsoft has optimized for its Windows 11 operating system. As for the mobility Alder Lake-P and Alder Lake-M lineups, they are expected to get both DDR5 and DDR4 memory support and will launch in Q1 2022.