Intel's entire 11th Generation Rocket Lake & Comet Lake Refresh Desktop CPU family has been listed online along with preliminary prices. A total of 30 CPUs have been listed by Belgian etailer, 2Compute along with prices which suggest that the upcoming flagship might be slightly cheaper than the existing one.

The retailer has listed down 14 Rocket Lake and 5 Comet Lake Refresh Desktop CPUs. All of these are part of the 11th Generation Core lineup that is planned for launch in March 2021. Do note that the prices mentioned here are preliminary and should get lower once we get close to launch. The Intel Rocket Lake CPUs will be featuring the brand new Cypress Cove cores while the Comet Lake Refresh Desktop CPUs will be based on the refined Skylake architecture. 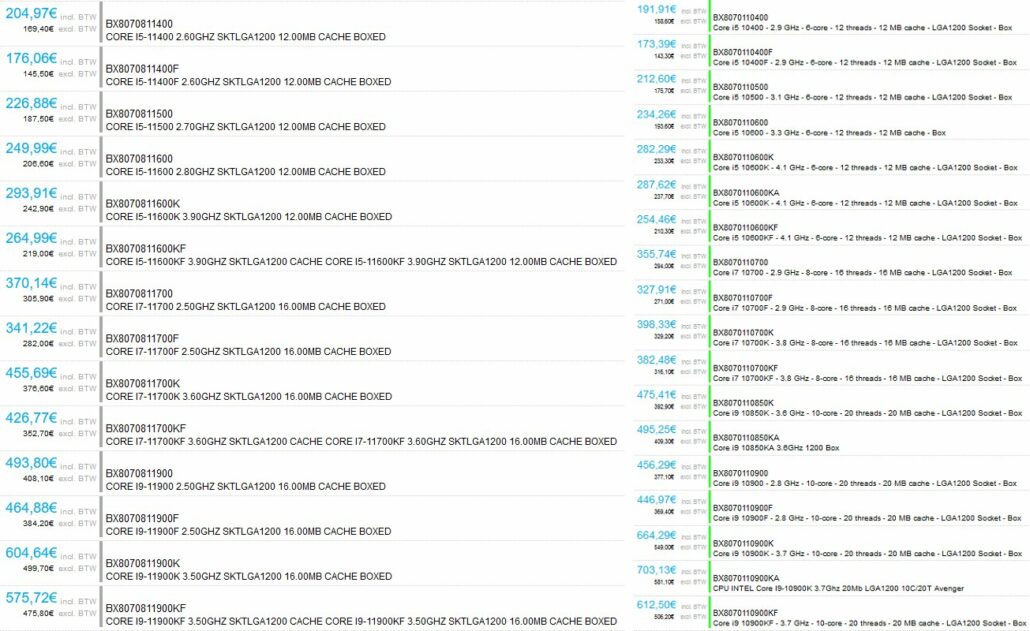 The most interesting part is that the Intel Core i9-11900K is actually listed for a cheaper price than the Core i9-10900K. This could be due to several reasons with the first one being the total number of cores and threads. The Core i9-10900K rocks 10 cores and 20 threads while the Core i9-11900K will feature 8 cores and 16 threads. Both CPUs will have similar clocks and Rocket Lake comes with a brand new architecture but the 10th Gen 10 core parts still sit at the top end segment so Intel will try not to compete with their own solution which offers better multi-threaded performance as seen in the leaked benchmarks yesterday.

Motherboard makers, especially ASUS will be paying extra attention in incorporating hardware-level integration of PCIe Gen 4 on their Z590 line of motherboards versus their Z490 lineup as we pointed out here. You can also check out our full Z590 motherboard round-up over here.

As we reported, the Intel Rocket Lake Desktop CPUs will be shipping months after the 500-series boards that will be available on 11th January. The CPUs are expected to be announced at CES 2021 but a hard launch isn't planned till March-April.

Which next-generation Intel Desktop CPU platform do you think will deliver the first major breakthrough against AMD Ryzen?