Another Intel Rocket Lake Desktop CPU has leaked over in the 3DMark database and this time, it's a 6 core and 12 thread part. The 11th Generation processor family is expected to be launch later this year and will feature a brand new CPU & GPU architecture embedded on the same die. 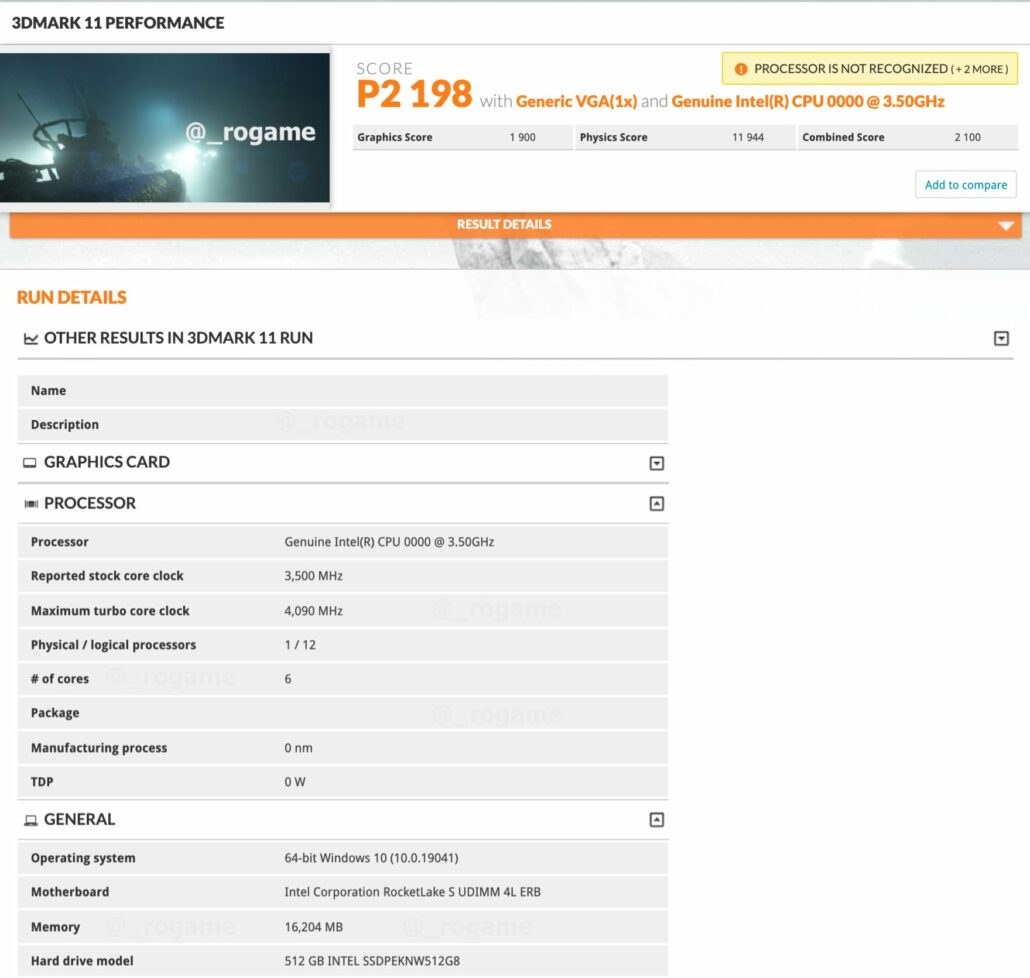 Intel's 6 Core Rocket Lake-S Desktop CPU has been spotted in 3DMark along with its performance benchmark. (Image Credits: Rogame)

Once again, the clock speeds reported for the chip are nowhere near where you would expect the final retail chips to land. The Rocket Lake-S CPUs, despite being based on a new architecture, still rely on the 14nm process node which has seen years of progress and refinement. In terms of clock speeds, the 14nm node offers up to 5.30 GHz on a 10 core / 20 thread chip as seen on the flagship Comet Lake chip, the Core i9-10900K. Based on that, we can expect the final clock speeds for the 6 core chip to end up at least somewhere around 4.5 GHz (boost clocks).

It looks like a lot of optimization work is yet to be done for Rocket Lake-S CPUs before they launch because Rogame additionally posted the performance result for the chip in 3DMark 11. The CPU scored 11887 points in the Physics benchmarks and 1900 points in the Graphics Tests. The graphics test was around 4% faster than the Core i5-10400 CPU which features an older Gen 9.5 graphics chip but in the CPU tests, the Core i5-10400 took the leak by 8%. The higher 4.3 GHz frequency on the Core i5-10400 definitely helped it out but once again, the CPU is in early ES state so final tests would yield much better performance numbers.

In a recent post, it was rumored that Intel's 6 core Rocket Lake-S unlocked desktop CPUs could feature PL2 power limits as high as 191W.

Once again, the reason I think that Rocket Lake is using Willow Cove cores is that Tiger Lake with the same architecture features Xe Gen 12 graphics while Ice Lake with Sunny Cove cores is using the Gen 11 GPU. It is possible that the cache is different on desktop chips but once again, that remains to be confirmed and until we see more leaks, this is up for debate.

Overall, the Rocket Lake-S family is expected to launch later this year with Alder Lake-S targetting a late 2021 or early 2022 launch timeframe. That would be around the same time when AMD is expected to launch its own DDR5 platform based around the rumored AM5 socket with support for Zen 4 based Ryzen 5000 CPUs which will definitely be something to look forward to.