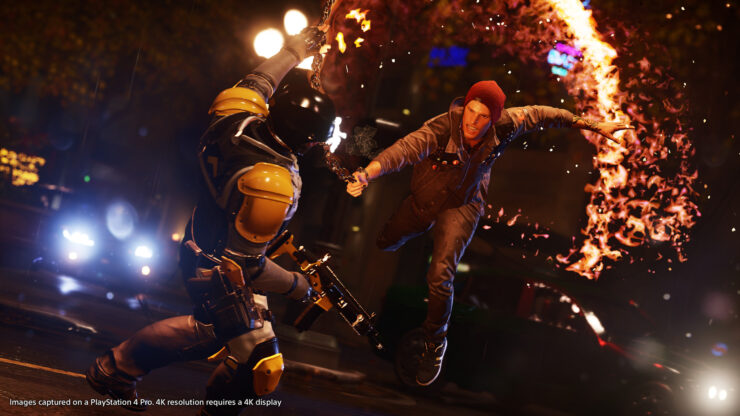 Sucker Punch went into detail in a blog post about all the visual and performance upgrades coming to Infamous Second Son and First Light for the launch of PlayStation 4 Pro next week. A few days ago we posted the 4K screenshots of First Light, but now Jason Connell detailed three big reasons that should prompt you to check the games again after these updates.

First up is HDR. When we re-worked our engine to create Infamous Second Son for the PS4, we had a strict focus on realistic lighting and exposure. We wanted the art direction and tech to reflect realism in a way that immerses players in the damp, rainy streets of Seattle. We did a lot of work to ensure our sky, sun, and light sources felt like the real thing. So why is HDR such a big deal now? This patch, along with an HDR capable TV, pushes those crazy bright values even further.
Yes, that means looking at the sun or sky in our game feels extremely bright, providing a level of contrast I’ve never seen in our game before. The vibrancy of the sky and lighting creates some really striking and beautiful moments. Furthermore, this particular feature will work on the standard PS4 as long as you have an HDR capable TV.

The second reason is in the smaller details. In both games, the Seattle city streets are filled with incredible art from our hard working art team. Signs, coffee cups, puddles, fall leaves — this world is filled with little touches waiting to be noticed. With PS4 Pro’s increased resolution, those touches are even more crisp. You can see detail on bricks and signs that previously went unnoticed. When we created the Seattle landscape, we had a goal to make everything wet. That means reflections of those details on every surface. It also meant a fair amount of specular aliasing. The increased resolution improves this and many other alias issues. And if you don’t have a 4K TV, you’ll still see a smoother image as the PS4 Pro will scale down to match your 1080p display.
The third — and best — reason to revisit the Infamous games on PS4 Pro is simple: the powers look amazing. Delsin’s smoke powers and Fetch’s neon powers are particularly impressive. Watching the original effects now in 4K and HDR, I notice details I didn’t even know existed. For example, when Fetch does a ground pound, waves of brilliantly flickering particles erupt in all directions. We even improved photo-mode to let you pause on powers. My favorite is winding up Fetch’s ultimate neon bomb and then quickly activating photo-mode to pause and observe the thousands of emissive particles bits forming around her.

As a developer, it’s great to see games that we released two years ago come to life in more dazzling ways than ever before. The increased power, resolution, and HDR capabilities of the PS4 Pro breathe new life into every corner of the game.
If you’re into lighting, rendering, or VFX, I would encourage you to check it out. Second Son and First Light are beautiful games on PS4, but on PS4 Pro, they’re an exciting window into the future.

PlayStation 4 Pro launches worldwide on November 10th for $399.99. There are over 30 games that will be patched (or have been patched already, in some cases) to coincide with the launch of the PlayStation 4 Pro console. While the list does contain mostly recent releases, there are even older titles like Infamous Second and First Light, which came out two years ago. Which one of the PS4 Pro launch titles are you looking forward into checking out?