Immortals Fenyx Rising Guide: How To Get The Most From the Golden Isle 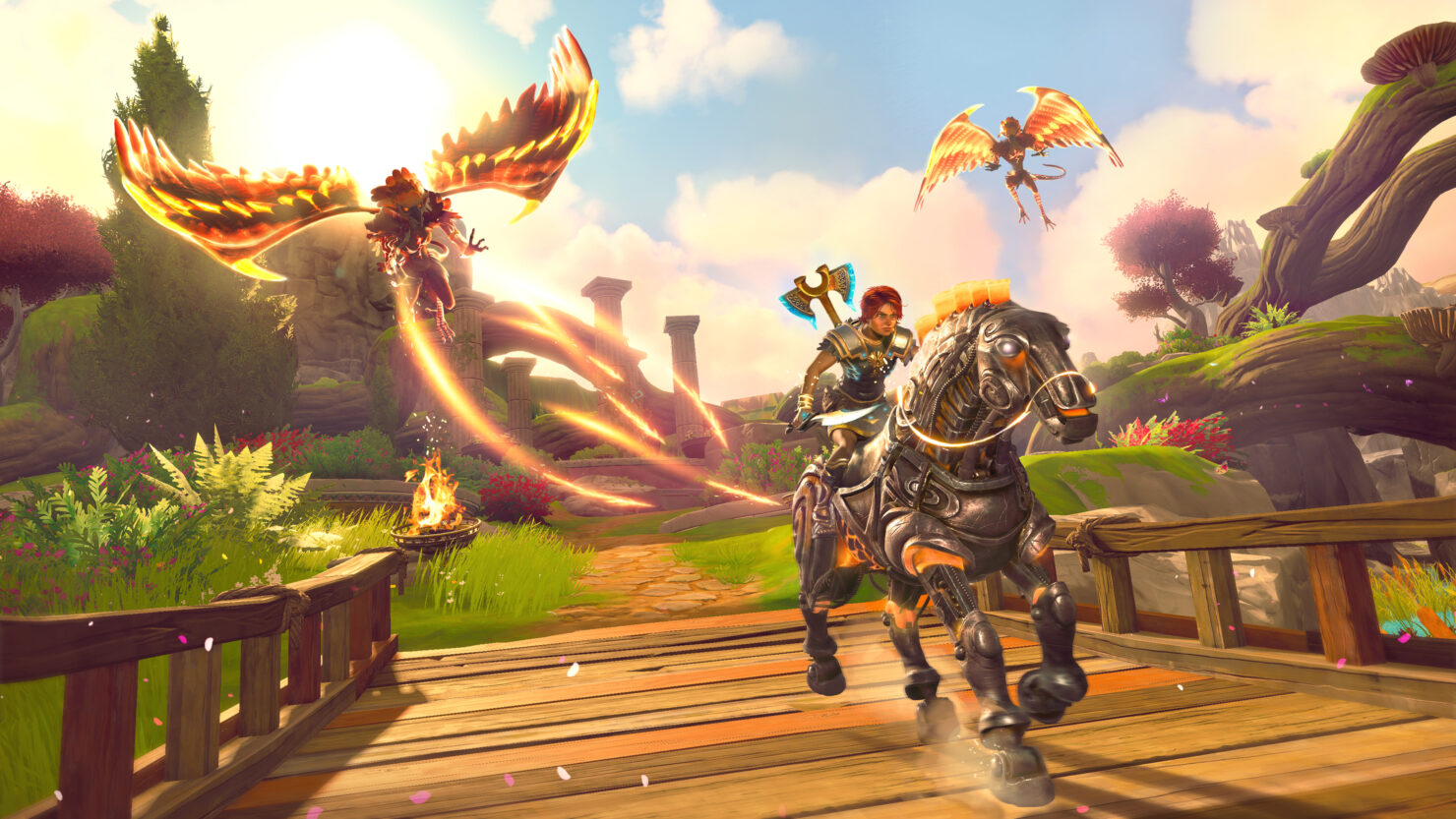 If you’ve played an open-world Ubisoft game in the last several years, you might think you have Immortals Fenyx Rising figured, but this game of Greek Gods and Monsters is a far departure from the standard formula. If you’ve played The Legend of Zelda: Breath of the Wild, you’ll have a better idea of what to expect, although the game has taken its own twist on things.

And if you’ve played neither you might be slightly lost wandering the cragged rocks, furtive fields, and dense forests of the Golden Isle. So for everyone that needs a hand, here’s a guide on everything you need to know about exploration when you first load up the game.

Listen to the Trees 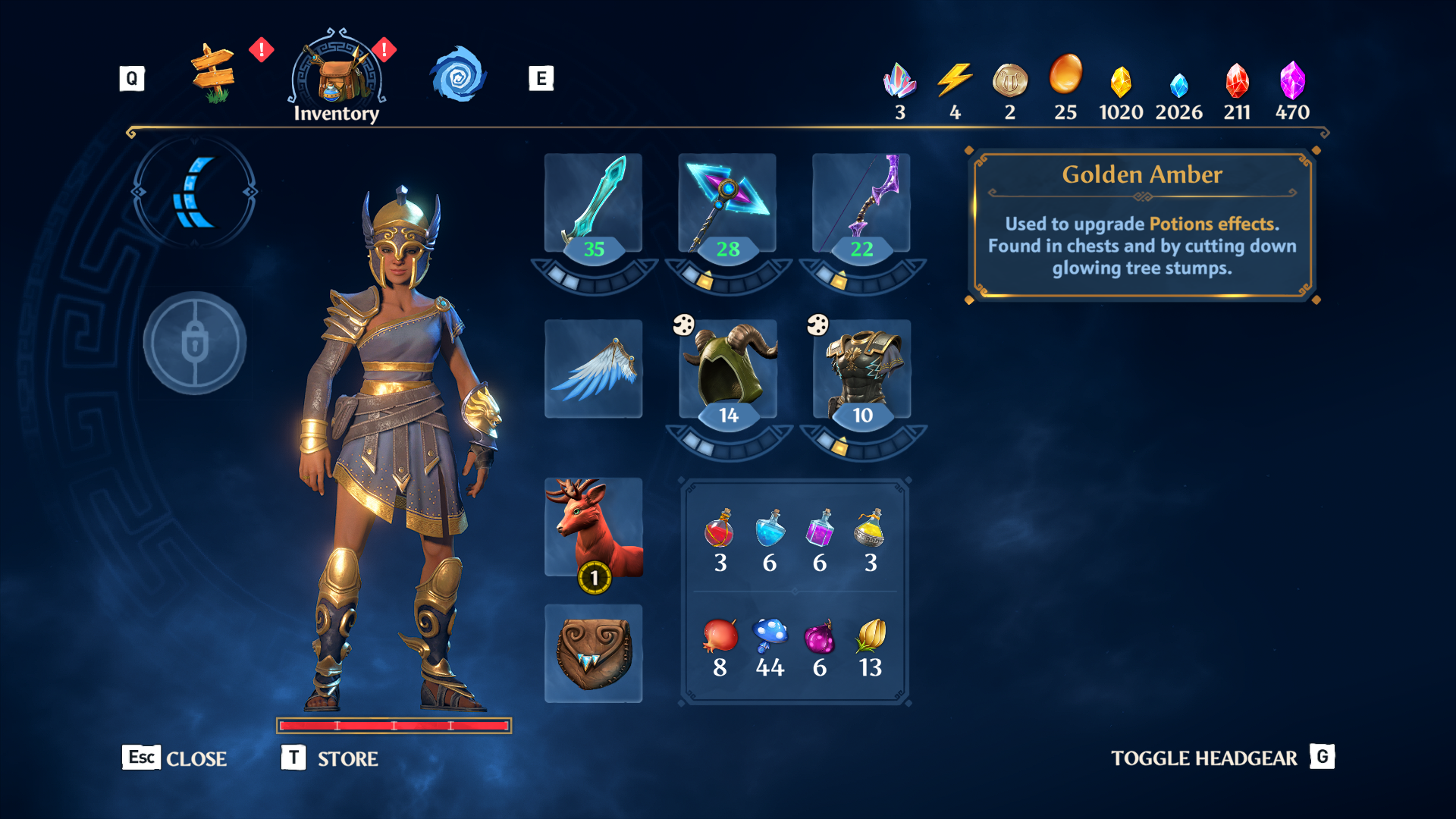 In the Ancient Greek myths, heroes from across the Aegean Sea would come across all manner of strange magical creatures, from satyrs to sirens and nymphs. The latter of these often camouflaged as trees and other foliage to avoid the unwelcome attention of mortals. In Immortals Fenyx Rising, you can cut down trees as you pass by, but there’s a certain type of tree you should look out for. And don’t worry, it’s not a nymph in disguise. I hope.

No, it’s a perfectly normal tree, save for the fact you can hear a jingling hum coming from its trunk as you pass by. Should you hear a tree singing, you best get swinging. These rare trees are hiding Golden Amber inside, a resource you’ll want to start collecting as soon as possible. Golden Amber allows you to upgrade your potions effectiveness, which is vital as your health and stamina pool increase, and you fight tougher enemies later in the game. It’s not that you have to scour every forest in the early stages of the game, but keep an ear out for the telltale sign to collect any you happen to come across.

Feel Free To Throw Away Your Shot 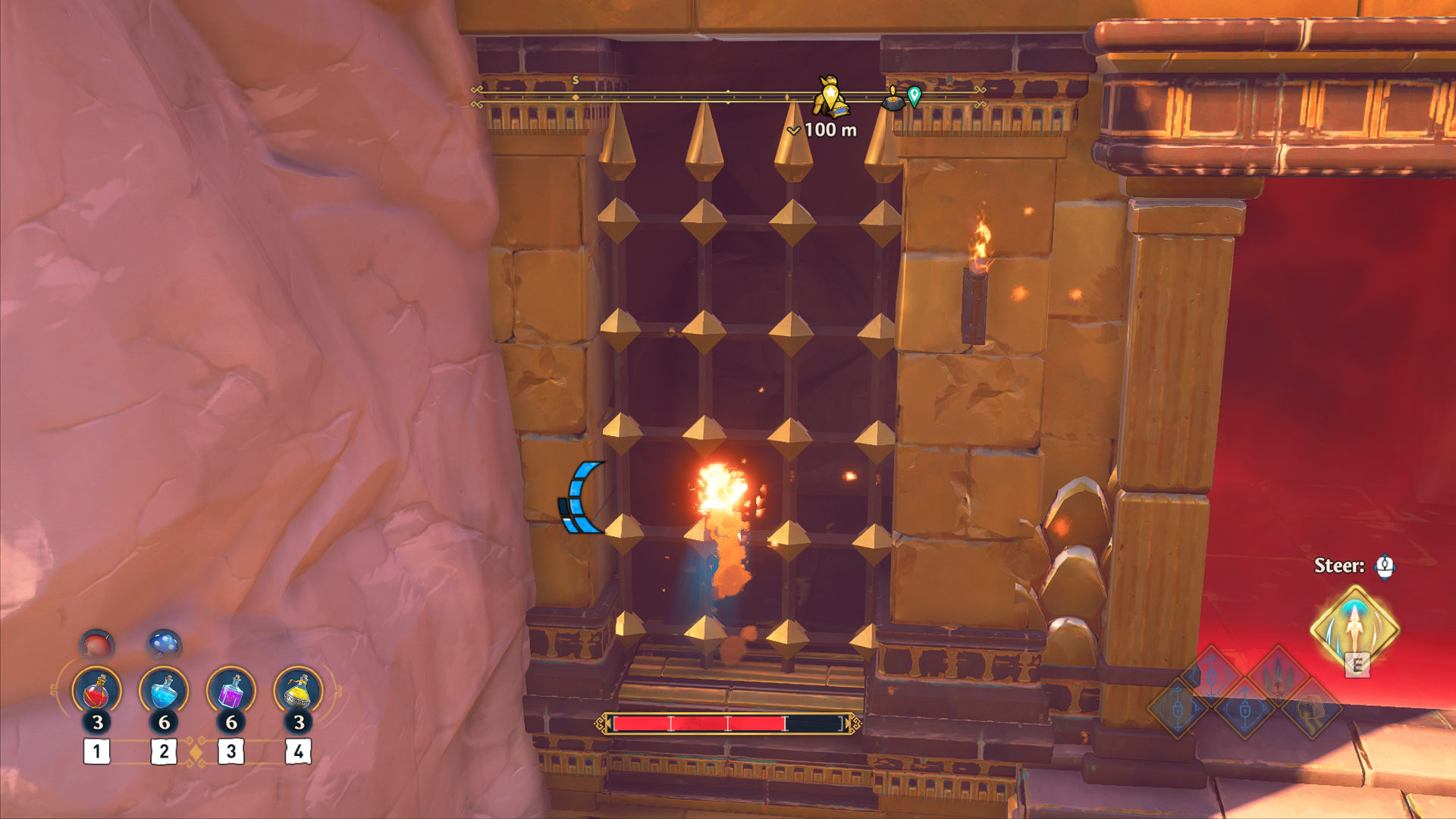 While you’re out there listening to the trees, you should also keep an eye open for anything that looks suspiciously like a target, bullseye, unlit brazier, or anything else that might be affected by an arrow or two.

You’ll find the bow very early in the tutorial of Immortals Fenyx Rising, and it’s probably worth staying on the linear path at least until you do. That’s because a lot of the puzzles you’ll come across will revolve around using the bow to hit targets that open up doors and panels and allow you to find various chests scattered across the island. Using the bow’s special ability, you can control the arrow in flight (at the cost of some stamina) which can help you land impossible shots and navigate around obstacles. Using this to pass your arrow through a flame will also ignite it, so you can light and suspiciously unlit braziers, which will often reveal or unlock routes for you. Sometimes you’ll have to be standing on a specific point to activate the targets, so look out for any buttons on the ground as if you’re having any difficulty.

You’ll also quickly come across Hercules’ gauntlets, which will allow you to pick up and move heavy objects. This is another standard puzzle-solving task, especially with the aforementioned buttons, so it’s probably best to find these as early as possible too. Don’t worry if you lose them either, you’ll get them back pretty quickly. And while you’re collecting all these heroic relics, there’s another worth looking out for...

I Just Flew In From Greece, And Boy Are My Arms Tired 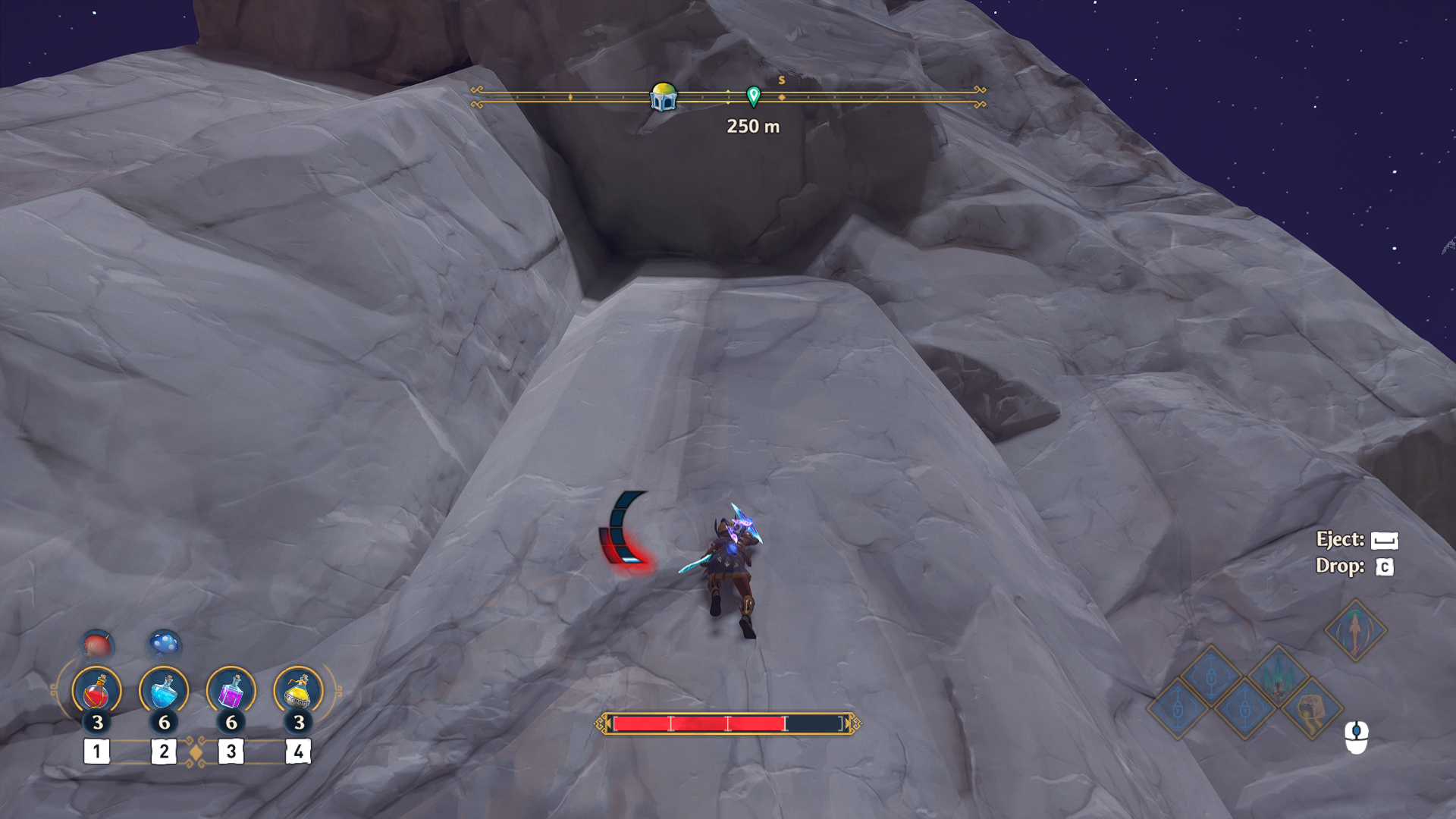 Early in Fenyx’s introduction to the mythical world, as well as your tutorial of the game, you’ll come across Icarus’ broken wings. They might not be good enough for full-fledged flight or pass Crete’s health and safety inspection, but they will allow you to double jump, making it much easier to reach higher locations and traverse distant platforms.

Like Breath of the Wild, you can attempt to climb anything, but that will cost you your stamina, making some places out of reach. Doubling jumping can help simplify this, but each additional jump in the air will cost you a segment of your stamina bar. This is worth keeping an eye on as you explore some of the platforming sections of the game. You really don’t want to fall to your death because you were too good at platforming because absolutely no one will believe you.

There are a few advanced tricks you can master with the double jump, one of which the game will hint at. While climbing, you can use the double jump to get past lips and ledges that block your route, which is very useful when you’re trying to ascend some of the odder shaped things across the Golden Isles. The other, it doesn't explicitly say, but it’s worth remembering all the same. While a double jump will cost you a segment of your stamina, it doesn’t have to be a whole segment. Each double jump will use whatever is left of whichever segment you’re in, no matter how much of the current segment is already used. That means if you’ve used most of the segment to climb a statue, you can use the rest of it to perform a double jump to clear the final hurdle. This is really useful when exploring the island and trying to climb up things that might otherwise be impossible, especially if you’re low on potions. Speaking of which… 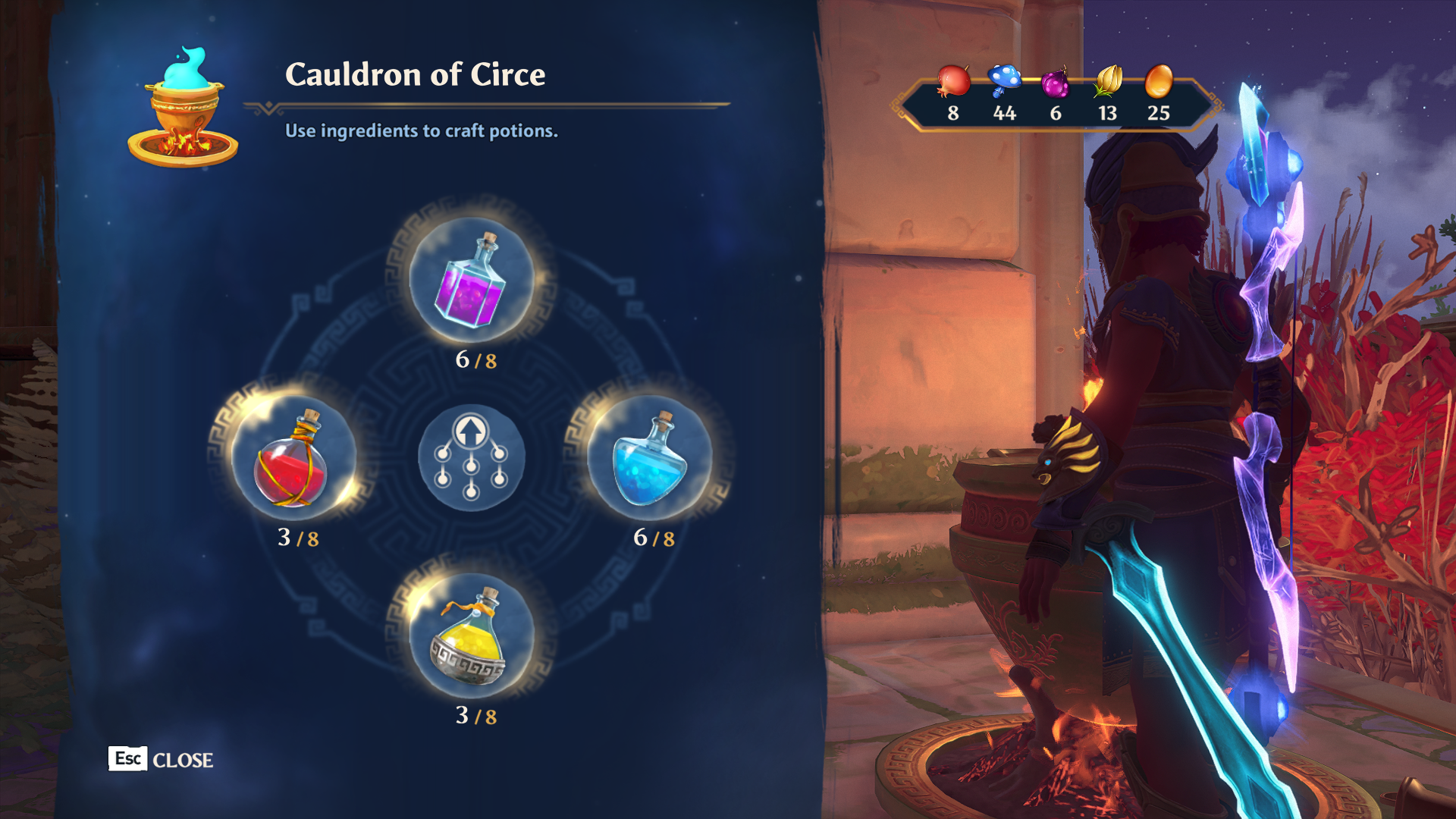 When you begin your odyssey in Immortals Fenyx Rising, you’ll almost immediately come across blue and red mushrooms. The blue, you are told, refills some of your stamina bar while the red heal some of the damage you’ve taken, although neither does very much. You’ll also find a handful of potions of the same colours as well, which do the job much better.

It can be tempting in a pinch to cram down a handful of mushrooms as you climb the various cliffs or get beaten by some harpies, but you should avoid doing so whenever possible. Once you’ve completed the tutorial and made yourself onto the Golden Isle proper, you’ll quickly find instruments that let you transform mushrooms into potions. The standard exchange is 6 mushrooms to one potion, and while that might not sound like a great deal, it's actually more than worth it. Not only are potions more effective, they are also easier to consume, requiring nothing more than the tap of a button, rather than pressing and holding.

You’ll also come across some other plants as well, white and pink(?), that can be exchanged for attack and defensive potions at these stations, so there’s plenty of reason to spend a few minutes getting the best potions possible for your adventure.

Think Outside The Greek Jug 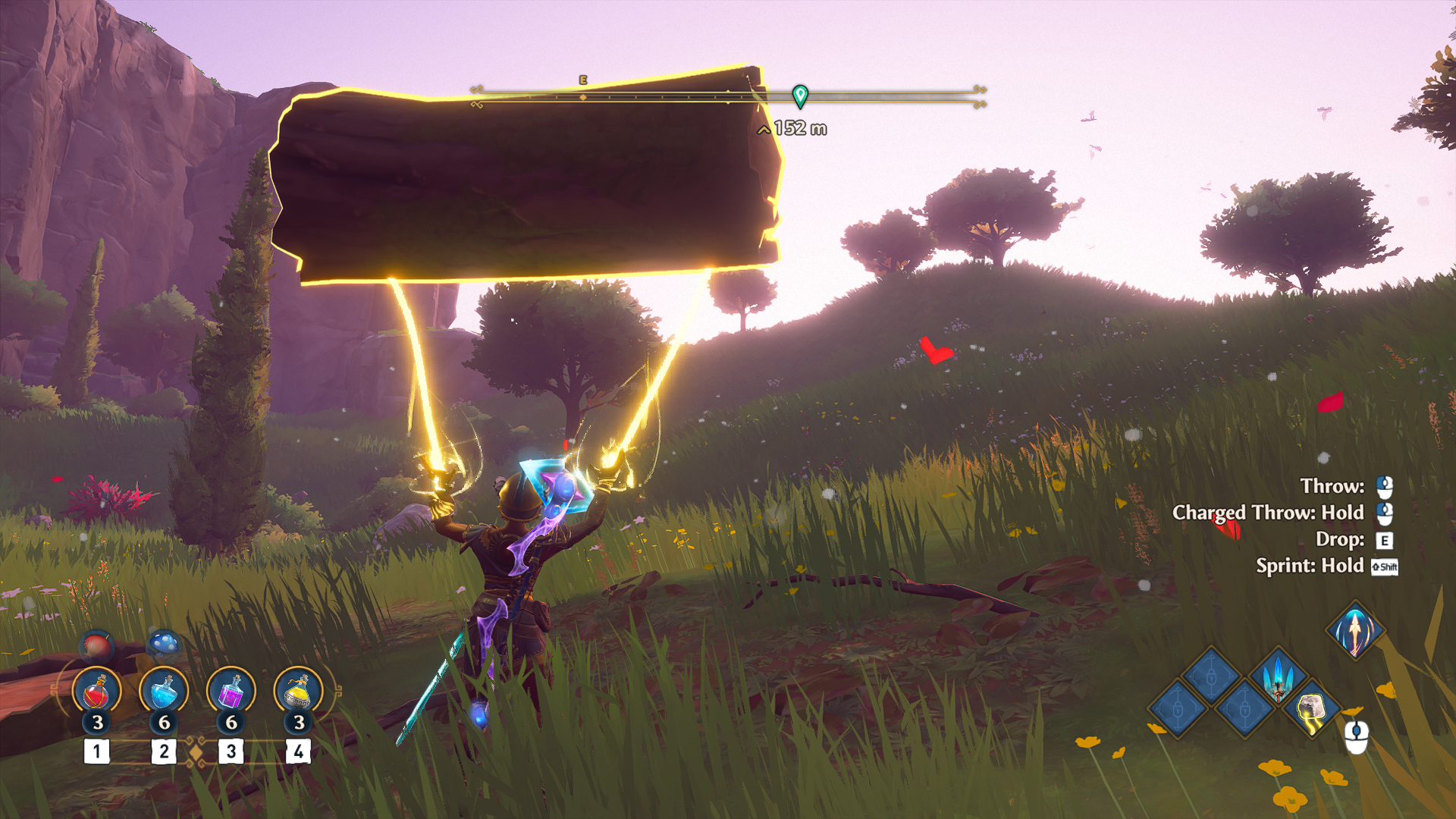 Immortals Fenyx Rising is Ubisoft's first real experimental attempt at the systemic genre. Like Breath of Wild that clearly inspired it, or Dishonored and Deus Ex, this genre is all about experimentation and overlapping systems. Essentially, the game is more open-ended than most other Ubisoft titles and doesn’t have a single solution to complete your tasks.

What this means is that there is no one way to complete a lot of the puzzles you’ll come across, whether they be platforming, climbing, or logic puzzles. So when you’re surveying an area, looking for some way of solving something, don’t be afraid to try something that you don’t think you’re meant to do.

The easiest example of this is some of the puzzles that require weighted buttons. The game will often provide these weights for you to use, but sometimes they won’t. Sometimes, you’ll need two light objects to press down on two buttons but the game has given you a single large block of marble. Instead of scouring the surrounding area for some rocks, try hitting the block a few times and see if you can’t make some small squares from the rubble. Or if the game doesn’t provide anything at all, you can go cut down a tree and use that instead.

Likewise, there are hundreds of other things that the game provides, that can be used in ways the designers might not have expected. But it's not cheating, or hacking, it’s like the old saying goes: “it’s not the cards you’re dealt, it’s how you play them.”

Keep an eye on the site for more Immortals Fenyx Rising Guides in the future, and you can always check out our combat guide if you’re looking for tips on how to slay the many monsters you’ll come across.