Teardown experts had found HTC One M7 of 2013 one of the hardest to fix due to various design factors. Is the HTC One M8 fairing any better? Or should you rather opt for the HTC Advance to save you plenty of bucks in case your device gets broken or damaged? Here are the details from HTC One M8 teardown. 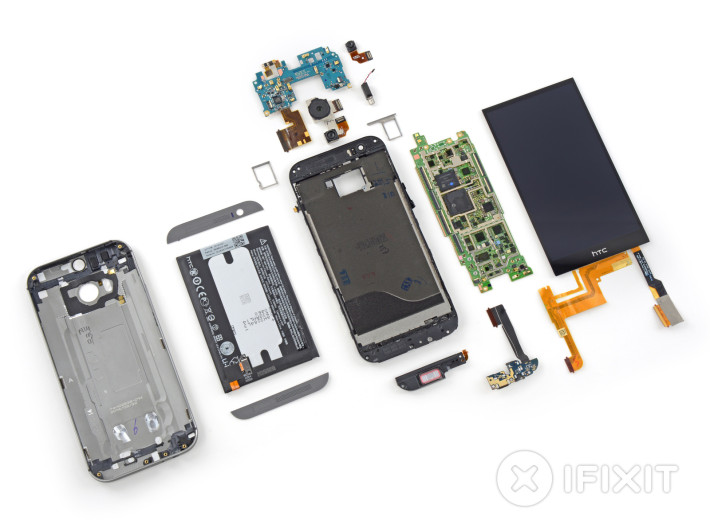 The experts at iFixit, the company which curates DIY guides and teardown videos to help professionals repair the devices, had given last year's One a meager 1 in the ranking. It ranks the devices on a repairability scale from 1 to 10 with 10 being the easiest to repair and 1 being the hardest to manage. The factors that affect any device's repairability scale include irregular screws, glued components, or a very tight fighting to manage the device.

In the HTC One M8 teardown video, iFixit shares the situation inside the brand new HTC One (M8),

"The display assembly cannot be replaced without tunneling through the entire phone. This makes one of most common repairs, a damaged screen, very difficult to accomplish."

Last year's HTC One (M7) had got only a 1 on iFixit's scale. If this gives you any relief, the latest HTC One (M8) gets a 2 from iFixit teardown experts. This is only a slight change which is because of the durable build. Nothing inside the device makes it an easy device for repairing. While we already did a drop, scratch and water test to see if the smartphone could sustain a few hits here and there; iFixit's One M8 teardown would show you what to expect realistically when you have a broken or damaged HTC One M8.

The experts noted that One's rear case is very difficult to remove without damaging it. The battery is also very difficult to access as it is glued to the main board. IFixit also notes that the repair work is made harder by the use of copious amounts of tape, adhesive, and copper shielding.

These findings confirm that getting an HTC Advantage warranty plan might just prove to be a good idea. This warranty program is being offered by HTC in US and will repair you a cracked or broken display screen within the first six months of usage. Replacing screen of the latest smartphones is one of the most costly repair operations. It is advised to get yourself this warranty package to get a free screen replacement. HTC is trying to make the deal more palatable with a 50 GB of free Drive storage and a guarantee that you will receive latest Android updates for the next two years.

- Relevant HTC One news and guides: