According Videocardz.com, the GTX 980 Ti nomenclature can be confirmed for the upcoming card at this point according to their own sources. This is interesting as it was up for debate whether Nvidia was going to introduce one new single-GPU GM200 based 900 series card or more. Now it seems there will only be one GM200 based single-GPU solution in the 900 series. This is because there's simply no room for another addition between the GTX 980 and GTX 980 Ti.

Videocardz also confirmed that the GTX 980 Ti will feature the same display oututs. Namely a single DVI, a single HDMI and three DisplayPorts. The card will also have one 8-pin and one 6-pin PCIE power connectors. These are the only specifications that can be confirmed as of right now according to the report.

Now an even more interesting question is if the GTX 980 Ti does truly have a full GM200 GPU with 3072 CUDA cores as was previously rumored, where will the cut down GPUs go ? This might seem like a strange question to some because why would Nvidia want to sell a cut down version of GM200 if they can sell the fully unlocked GPU core ? Unfortunately this is where the ruthless nature of semiconductor economics shows its face, issues like yield and manufacturing defects simply necessitate it.

To understand this dilemma one must first understand how GPUs are manufactured. Integrated circuits like GPUs and other processors are photochemically printed on what is called a Silicon wafer. This process is actually far more complex than what it sounds like. And it often takes two to three months for a wafer order to materialize into actual working chips. A Silicon wafer with a 300mm diameter has a total area of 70650mm² but if we take into account things like the shape of the GPU die, the size , die spacing and so on we arrive at an estimate of 91 GM200 dies per 300mm wafer. 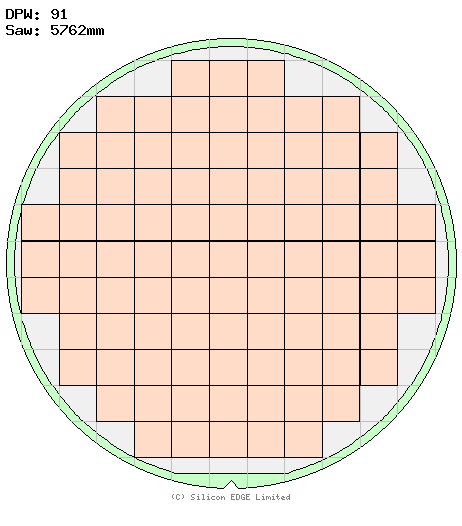 This is where yield comes into play. You simply can't produce a wafer with 91 perfect GM200 dies. In fact the majority of the dies will have a manufacturing defect of some sort, ranging from a good number of very minor defects to a few significant ones that render the die completely unusable. The larger the die the more likely it will contain a manufacturing defect and GM200 is a massive die. Only a limited number of dies would come out unscathed in any given wafer.
The location of the die within the wafer also plays an important role in defect density. As you move further away from the center of the wafer the higher the defect density becomes. So the premium "cherry picked" chips are usually taken from the center. In the case of GM200 those are the ones that end up as GM200-400 GPUs in the Titan X. These will have 24 out of 24 fully functional SMM units with 128 CUDA cores each, amounting to 3072 CUDA cores.

The way the semiconductor industry has dealt with this issue for the past several decades is by disabling the defective structures, under-clocking the chip or a combination of both. Depending on the type and severity of the defect. These chips are then sold as lower end SKUs. So each manufactured wafer will yield a number of chips with different quality levels and thus a different number of SKUs.

In the case of GPUs, both Nvidia and AMD would simply disable a number of SMM / CU units containing defective/malfunctioning CUDA or GCN cores and then slightly lower the clock speeds to sell the GPU. This is what differentiates the GTX 980 from the GTX 970 and the R9 290x from the R9 290 for example. However I should point out that in some cases, although less commonly, fully functional dies would be purposefully cut down simply to meet demands for lower end SKUs.

Nvidia so far has only been selling fully functional GM200 GPUs, GM200-400, in the Titan X and Quadro M6000 cards. So during all of this time, recovered / cut down GM200 GPUs have been accumulating as wafers are fabricated and they have to be eventually sold, otherwise a huge amount of dies on a wafer would be thrown away. Which would be financially detrimental as no company can afford to do this. Selling these recovered GM200 GPUs as GTX 980 Ti cards makes the most sense.

If they don't end up in 980 Ti cards they have to end up in some other product. But there's simply no room to fit an additional SKU between the GTX 980 Ti and the 980. Quadro and dual-GPU GeForce cards sell in considerably lower volumes than single-GPU GeForce cards, so they won't be enough to consume the inventory. A cut down GM200 GPU has to find its way to a single-GPU GeForce card. We just don't know yet for certain if that card is the GTX 980 Ti. But considering semiconductor manufacturing economics and the GM200-310 code name we do think it's a genuine possibility.