ASUS has just released their latest GeForce GTX 980 Ti STRIX Gaming Ice graphics card which is one of the most beefy GM200 designs to launch. ASUS has been on a roll since the last few weeks as they have released a range of 900 series cards that include two power connector less GTX 950 graphics cards and today they are launching a beefy graphics card featuring NVIDIA's enthusiast-class Maxwell GPU. 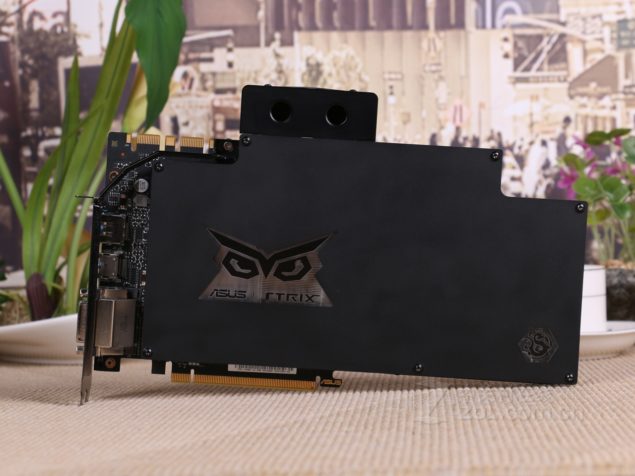 The ASUS GeForce GTX 980 TI Gaming Ice is the latest addition in the STRIX Gaming lineup. The graphics card is an enthusiast aimed product which comes with a full cover water block made by Bitspower. We will get to that in a bit but first, let's talk about the specifications. This GM200 based graphics card is a little late in its launch but its a beast in all regards. The core specifications remain the same which we should expect from a GTX 980 Ti graphics card. 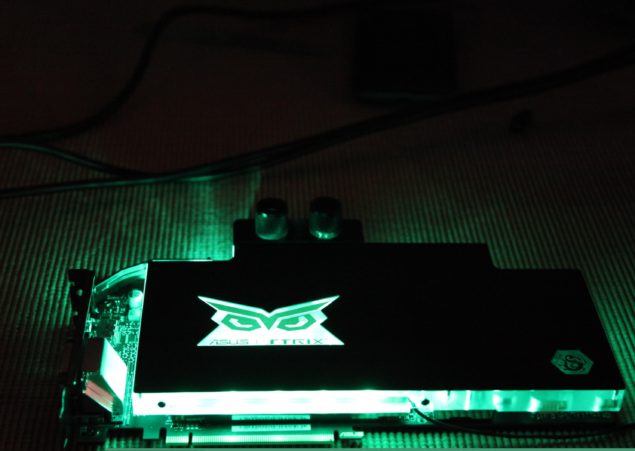 The core features 2816 CUDA cores, 176 texture mapping units and 96 Raster operation units. The card clocks in at 1216 MHz base and 1317 MHz boost clocks. In fact, the card has two clock profiles which can be enabled at any given moment. The gaming mode has clocks set at 1190 MHz base and 1291 MHz boost while the ones we mentioned above are the overclocking mode profiles. The gaming mode sips in a little less power from the board while the overclocking profile plugs in full power into the board which is a beefy 14 Phase PWM design that sucks in a lot of power. This board requires dual 8-Pin connector to boot since its a fully custom design and fitted with the highest quality components to ensure that this card overclocks to the max limits.

The card sticks with its 6 GB GDDR5 VRAM but is clocked a little bit higher than the standard GTX 980 Ti cards. The memory clock is maintained at 7200 MHz instead of the reference 7000 MHz clock which pushes the band width to 345.6 GB/s. The memory modules are from Samsung which are their highest stack rated to achieve speeds of up to 8 Gbps hence memory overclockers will be in for a delight with this card. The overall built and design of the PCB is really good on this card.

The design of the card is what you'd expect from a card that is attached with a full cover water block. The water block in itself is quite beefy and made by Bitspower who are a premium supplier of water cooling components for PCs. The card uses a dual slot design and the water block comes in a matte black color scheme. An acrylic window on the front features the STRIX gaming logo that emits LED illumination when the card is booted. The same illumination is featured on the borders of the water block which gives a cool effect to the PC and the leds can be configured in various colors. The back of the block is a full cover backplate with ASUS's GPU Fortifier which relives the pressure off of the GPU.

The ASUS GeForce GTX 980 Ti STRIX Gaming Ice is a powerful card and shows the one big factor which has led to the tremendous popularity of the 980 Ti graphics card which are its custom models. Retailing at prices close to the $649 US mark and offering much greater performance compared to its competitor, the 980 Ti has been the king of hill for a whole year. This specific model will retail for $899 US which is $150 more than the stock variant but comes with a fully custom design for which ASUS demands a higher price. One thing to note is that this model really is a little late since NVIDIA is on the verge of announcing their new Pascal cards at GTC 2016. But the GeForce GTX 980 Ti still offers a good punch at the current and upcoming AAA titles. There are several other custom models which can be bought at a lower price and you can overclock them yourself to gain boost in performance.

GALAX has also launched their latest GeForce GTX 980 Ti HOF GOC ecdition graphics card which was showcased at the GOC event in China. The card is another beast at overclocking since it features an even stronger 14+3 phase digital power design with the latest high quality and custom ultra-thin inductance components.

The PCB itself is 10-12 layers wide that gives more sturdiness to the overall build quality while power to this bad boy is delivered through three 8-Pin connectors which makes the total power consumption rated at 525W for a single GTX 980 Ti card. This is because of the extreme power requirements that are demanded by the GPU when LN2 is used, which this card is perfectly suited for. The card can still run over two 8-Pin connectors but for users demanding extra power for LN2 overclocking can plug in the extra 8-Pin connector for unprecedented board power.