EVGA has launched their latest GeForce GTX 980 Ti VR edition graphics cards which are aimed at users who will be running the next generation VR experiences. EVGA had previously showcased their VR edition cards back at CES 2016 and are now formally launched in the market. The cards will be based on the flagship GM200 core by NVIDIA and will be available in reference or custom cooled models.

What makes these two cards special is that aside from being based on the already available GM200 core, the VR edition cards feature a HDMI 2.0 connector on the back of the PCB which can be connected to a 5.25 inch drive bay that is bundled with the cards. The drive bay comes with a single HDMI 2.0 connector and two USB 3.0 connectors to allow a VR HMD (Head Mounted Display) to be plugged in to your PC. The whole system will be connected internally with no cable mess running from the back of your PC. Additionally, this technique also provides a better plug and play option for VR gamers and developers.

Something I noticed while looking at the specifications listed by Oculus Rift, you need at least 3 USB 3.0 and a single USB 2.0 port to run a compatible HMD on a PC. EVGA's 5.25" drive bay doesn't come with the extra ports that are required for VR HMDs. However, if you look at the exact details mentioned at Oculus Rift's page, a VR HMD can run on two USB 3.0 ports, the separate USB 3.0/2.0 ports are required if a controller or touch device is being used. 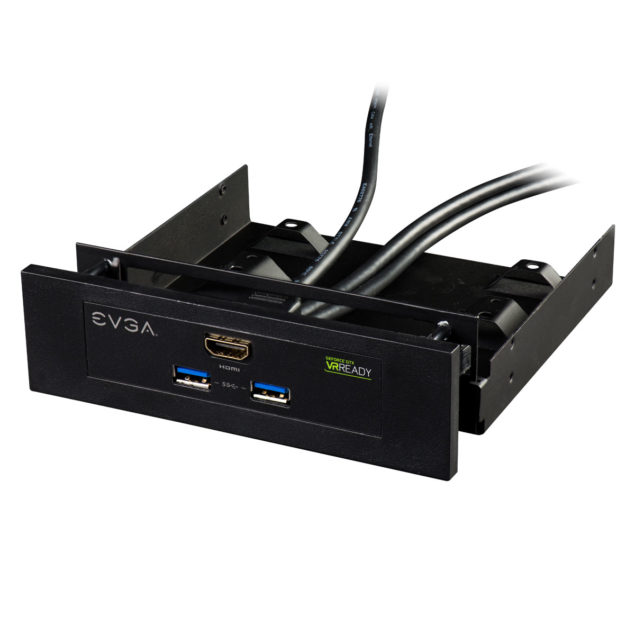 Talking about the cards themselves, the reference and ACX 2.0+ variants have the exact same specifications. The GM200 core is clocked at 1000 MHz base and 1076 MHz boost clock. Each card has 6 GB of GDDR5 VRAM that comes with a clock speed of 7 GHz effective. The memory runs across a 384-bit bus interface and provides a bandwidth of 336.5 GB/s. Both cards have the same display output configuration which includes a DVI, two Display Ports and two HDMI 2.0 ports. One HDMI 2.0 ports is configured on the back of the PCB so that it can be connected internally without any cable mess running on the back of your case. The reference variant comes with the NVTTM design while the ACX 2.0+ offers a dual fan cooling system which is a better buy at this point considering both retail at the same price of $699.99 US.

There's no doubt that VR is picking up the pace as we enter 2016. Just recently, GPU manufacturers showcased new technologies for VR at the VRLA expo. AMD demonstrated their Fury X2 while NVIDIA showcased the Near Eye Light Field VR headset which eliminates motion sickness completely. Game developers will be offering new VR experiences in 2016 which will showcase new experiences based in Virtual Reality. Oculus also announced their latest VR Ready PCs which include options ranging from $949 up to $2549 or you can go the DIY way and build a PC yourself with the components that suit your preference.