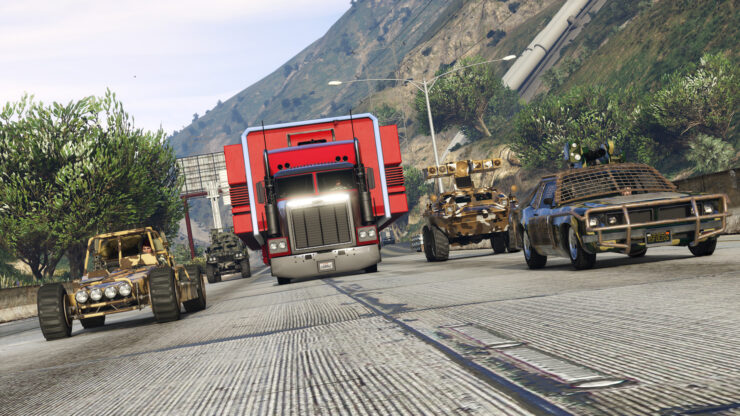 Rockstar has provided more details about the upcoming GTA Online Gunrunning update which is expected to release later this month.

The first screenshots and details about GTA Online's next update were released last week, and Rockstar Games has now provided some additional details alongside a set of new screenshots.

Customizable weaponized vehicles will make their entry in the Gunrunning update, and players will be able to use these vehicles “as company assets instrumental in delivering cargo to any drop-off.”

In Gunrunning, everything starts with an underground bunker, which will serve as a hub for the player’s new enterprise. Mobile Operation Center’s (MOC’s) will also make their appearance in the update. “For heavy duty tactical operations on the move, arms dealers can invest in a Mobile Operations Center (MOC), the kind of powerful support usually enjoyed only by trained assassins or rogue nuclear states”, Rockstar writes on their official blog. “Storable in your Bunker, this drivable command center’s modular construction allows for tailored combinations of vehicle workshop, weapons workshop, luxury living quarters, and command center – with facilities for upgrading and customizing your arsenal and modifying Weaponized Vehicles (including turrets for your MOC that can be manned by your squad) – all at your fingertips, and pulled by a fully customizable commercial semi.”

Down below you’ll find some fresh new screenshots for the upcoming free Gunrunning DLC.

As said, the update is expected to release later this month on PS4, Xbox One and PC.