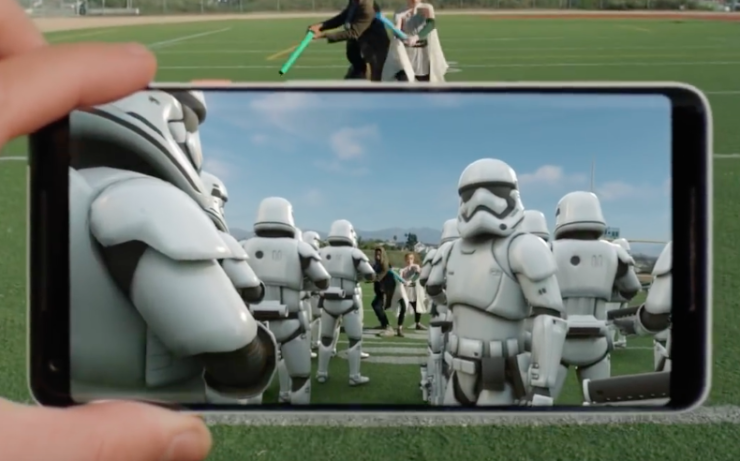 Google is collaborating with many brands to make the AR experience even better on the Pixel phones. As announced in October, popular characters from Netflix's Stranger Things such as Eleven and the Demogorgon will be available in the sticker packs. Besides, Google is also adding special Star Wars stickers ahead of The Last Jedi following this week. Right from the BB-8 to X-Wings and Stormtroopers, Star Wars fans with a Pixel phone are going to have a ball with these AR stickers.

The AR Stickers are integrated into the Pixel camera app, a new mode has been added to the camera’s slide-out settings menu. After switching to the stickers mode, users can simply select their favourite sticker pack that will give them open access to a plenty of stickers then they can choose one sticker and place them in the scene. Google also explained that the AR stickers can be moved around, resized, dragged around, and can also interact with the environment by responding to the camera and interacting with other characters that are placed in the scene.

We’re also introducing Foodmoji and 3D Text stickers so if you’re getting hangry waiting for your friend to turn up to lunch, you can take a picture with a cheeseburger to tell them to hurry up. Or, if you’re at a New Year’s party, shoot a celebratory video for your friends with lots of AR balloons and champagne.

For now, AR Stickers are limited to Google's Pixel devices that are running Android 8.1 Oreo. And it will be a waste of energy to expect AR Stickers to debut on devices other than the Pixel lineup. As for the Pixel users, AR Stickers will be available on your phones starting today so keep an eye on the camera app.

Check out the demo video with Stormtroopers!