We totally thought that the Galaxy S6 Edge Plus was one of those salty rumors never to be taken with an ounce of seriousness. However, turns out there just might be some bits of truth in the rumor. This phablety large, dual-edged Samsung Edge device comes back in the news with a no less than a video. 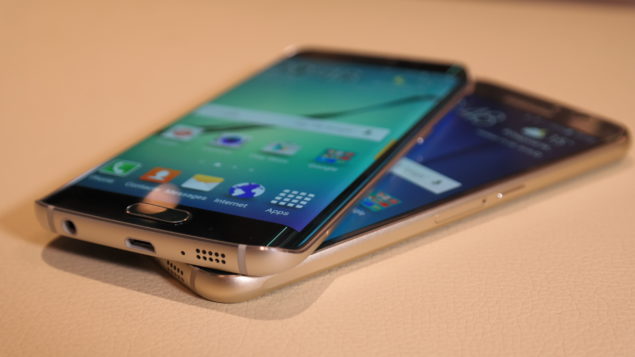 Well, not technically a video but the alleged Galaxy S6 Edge Plus shots appear in a video showing off the upcoming gadget. While it seems highly unlikely of Samsung to release a second S6 Edge device in the same year, this device could very well be termed as Galaxy Note 5 Edge.

There are definitely no major differences in the S6 and Note except the screen size and stylus. So even if this purported device is under the works, Sammy could tag it as Note's dual-edge version instead of launching a second S6 Edge device.

However, there is another sign of this actually being a larger S6 Edge Plus and NOT the Note 5 Edge. As shared with you earlier last month, Project Zen is being worked on at Samsung. This Project Zen or Zero 2 is a device that lacks S Pen functionality (symbolic of Note series) and seemed to be larger version of the Galaxy S6 Edge.

So with that earlier information and latest Galaxy S6 Edge Plus shots, it seems that Samsung is ready to release a plus size of S6 edge in the coming weeks. S6 Edge Plus launch is expected to happen before IFA starts. We shouldn't call this a second S6 Edge of the year too considering Samsung is not expected to give it a flagship status. Downgrading the processing chip to 808, S6 Edge Plus seems to be a device for Asian markets with higher demand of larger screens.

Anyway, this purported Samsung Galaxy S6 Edge Plus has now appeared in a YouTube video by Marques Brownlee who is reviewing the HTC's Quad HD One M9 Plus device while mentioning and showing the S6 Plus at the end of the video. The Galaxy S6 Edge Plus shots in the video show a device that looks like a usual S6 edge phone but very larger. This is a 5.5-inch smartphone rumored to come to please the Android fans who like larger screen sizes.

Samsung Galaxy S6 Edge Plus is rumored to be powered by a hexa-core Snapdragon 808 processor, 16-megapixel primary shooter, 5-megapixel selfie camera, 32 GB of storage, and of course the larger 5.5 or 5.7-inch display.