As we officially enter summer of 2016, the rumor mill has managed to stay quite consistent when it comes to features, specifications and renders of upcoming devices. One device, Samsung's Galaxy Note upgrade for this year has gained quite a bit of traction, and we've managed to gather quite a bit of details about the device.

The Samsung Galaxy Note 6, or the Note 7 as its being called by some quarters is expected to give the usual performance and specifications upgrades to the Korean tech giant's phablet lineup; as it expects to gain momentum after the Galaxy S7/S7 Edge launch earlier this year. Given the information that's surfaced so far, the device is expected to come with the Exynos 8890 and the Snapdragon 823, with Qualcomm also rumored to have a beefed up Snapdragon 820 variant in the works.

The US chipmaking giant did have a poor year in the form of 2015, as we saw Samsung and Qualcomm part ways for the Galaxy S6, with the former choosing to launch the smartphone with its in-house chipset instead. With the Snapdragon 820, we saw a complete design shift, as this time around Qualcomm chose to change things up in the form of the chip's Kryo cores and a more integrated design. 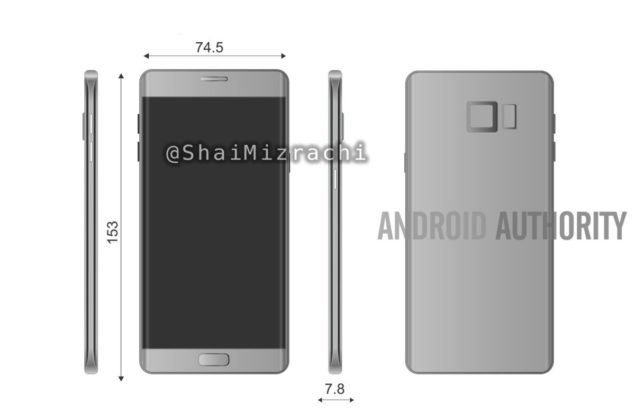 In fact, we've been hearing some interesting news surface for the Note 7 for quite  while now, as Samsung's been developing several new technologies. The company was granted Iris scanning patents a while back, which, coupled with other specifications for the Note 7, that include advanced OIS and increased RAM, peg this year's phablet from Samsung's end to be quite a device indeed.

As far as design goes however, apart from a dual-edged screen, little interesting details have surfaced about the Samsung Galaxy Note 6. Both Apple and Samsung have started to see more of a design slowdown, which is natural given that our gadgets have started to become more simplistic and minimal as time passes. So you should expect the Samsung Galaxy Note 7 with 3GB of RAM, Super OIS Plus, the Exynos 8890 and the Snapdragon 820 and a dual edged screen. We'd wager that the dual edges should end up to be a major selling point for quite a bit of users, especially those looking to enjoy Samsung's increased functionality on a larger screen.

Thoughts? Stay tuned and let us know what you think in the comments section below.