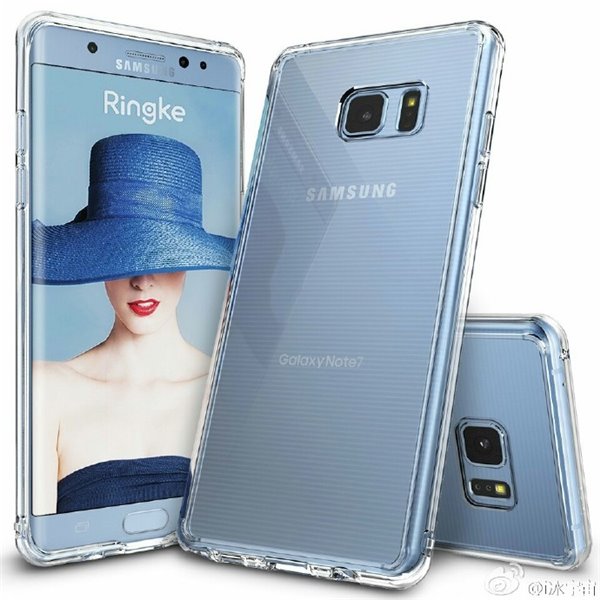 With the launch of the Samsung Galaxy Note 7 right around the corner, the rumor mill's started to pick up the pace when it comes to visual leaks about the device. Samsung's not much for design after all, even as the Korean manufacturer looks to consolidate its lineup this year, to more combat Apple more effectively in the high end bracket. To that end, its launch of the Note 7 next month will set the pace until 2017's launch of the next Galaxy S flagship smartphones and today, we've managed to get our hands on a lot of images and renders of the device.

The Samsung Galaxy Note 7 is expected to come with a lot of upgrades and changes this year, which will upgrade the device quite a bit over its predecessor. For starters, the Note 7 will be coming with an edged screen this year, which should finally mark a formal introduction of the feature in the Korean manufacturer's high end phablet lineup. The Note 7's also expected to come with an upgraded processor over the Galaxy S7 launched earlier this year, and if some more rumors are to be believed, then we might also be getting an Iris scanner.

Now, if you're wondering how all of these features will translate for the device's overall look, you've come to the right place. The Note 7's been rumored to be adding more colors to the lineup this year, one of which will be Coral Blue. Some renders of the device in this color option have surfaced today, and we think Samsung's managed to do quite a decent job with it this year. A word to the wise however, renders don't provide much on how the device should look in the flesh, but to that effect, we've also got a couple of live images for you as well.

Taking a look at the renders above, in terms of overall form, the Note 7 shouldn't change much over its predecessor. The device maintains the same old 'flat' look that's become customary of the lineup over the year. However, these renders, and the images below do confirm the presence of dual edges for the device this year, which should mark a nice change for aesthetics and functionality. Samsung's also rumored to increase the S-Pen's functionality by quite and both of these combined should ensure that the Note 7 delivers on multiple angles.

Moving over to live images, they show the device in full black and therefore manage to take out aesthetic charm completely out of the picture. The Note 7 in these live images has a rather 'flat' and 'heavy' look, which doesn't make up much for a good looking device. That being said, there seem to be a couple of new additions to the device's front this year, in addition to the customary IR, camera sensors, so maybe all that talk about an Iris scanner will materialize. Take a look below to judge for yourself.

While the authenticity of these images, and our assumption that there might be an Iris scanner in the Note 7 after all can only be proven after the device's launch, they do make for some nice food for thought. If Samsung does introduce an Iris scanner this year, then the Korean manufacturing giant will gain a significant advantage over the market and especially Apple.

To recap, the Note 7 is expected to come with 6GB RAM, an upgraded processor, improved camera and battery specifications and improved TouchWiz. Things should become more clear in less than three weeks, when Samsung launches the device. Till then, stay tuned and let us know what you think in the comments section below. We'll keep you updated on the latest.