We reported last week that Samsung is working on a new variant of Galaxy Note 4 powering it with the brand new sensation of the tech world, Qualcomm's Snapdragon 810. This model of the Samsung Galaxy Note 4 will be specifically available in Korea from different carriers. We are now looking at the first Galaxy Note 4 Snapdragon 810 benchmarks details.

Samsung is expected to offer this Galaxy Note 4 variant powered by the chip of next year, Snapdragon
810, in Korea from SK Telecom (model SM-N916S), Olleh (SM-N916K), and LG Uplus (SM-N916L). Samsung Galaxy Note 4 is already available with two different processors: Samsung's in-house Exynos Octa 7 and Qualcomm's Snapdragon 805. Now the device powered by 810 has appeared on Geekbench giving us one of the first Snapdragon 810 benchmarks.

Qualcomm's Snapdragon 810 has become a rage in tech industry for various reasons. However, Sammy fitting it in the Note 4 is possible as it is a full 64-bit chip making it world's first 64-bit octa core processor running on the energy efficient big.LITTLE configuration. The 64-bit architecture of Snapdragon 810 SoC will help the device run Android 5.0 Lollipop in 64-bit and become capable to run native 64-bit apps too. 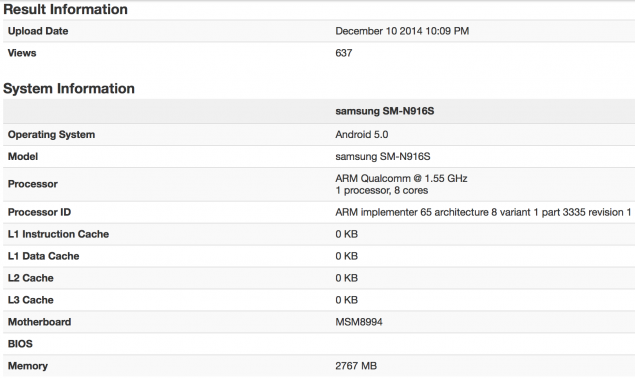