Back in November of last year, shortly after the launch of the PS5 and Xbox Series X|S, Spiders and Focus Home announced that their dark action RPG would also be arriving on the next-gen consoles. Today, the game’s developer and publisher announced the release date for this next-gen version alongside the release of the all-new Gold Edition of the game, which includes the new The De Vespe Conspiracy expansion.

The next-gen GreedFall update for PS5 and Xbox Series X|S will be free for owners of the game on PlayStation 4 and Xbox One. Save files from the past-gen versions will be compatible with the next-gen versions of the title. In addition to offering resolution support up to native 4K, the next-gen update will pack improved visuals, fast loading, and 60FPS in performance mode. 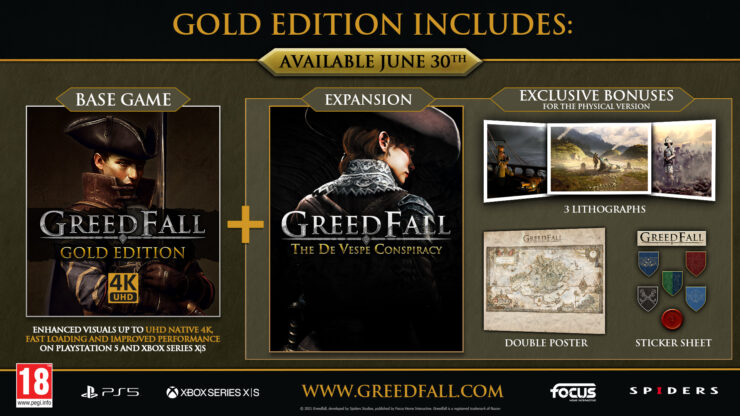 The Gold Edition of GreedFall will be arriving alongside the free next-gen patch and will include the base game and all-new The De Vespe Conspiracy DLC. “This expansion brings a brand new adventure to players on consoles and PC within the uncharted lands of Teer Fradee, with new enemies, gear, and a twisting narrative that expands on GreedFall’s acclaimed story”, the official press release from Focus Home reads. Down below you'll find a description for the expansion alongside two additional screenshots.

The De Vespe Conspiracy expands on GreedFall’s cherished world and story, inviting you to set foot on a previously undiscovered region of Teer Fradee and tackle a brand new intrigue. Navigate a web of lies, manipulation and secrets, as you unravel a nefarious conspiracy that threatens the balance of power. Explore an uncharted region of the island, battle strange new beasts, upgrade your equipment with new gear and face off against a villainous new enemy faction in your hunt to uncover the truth.