In a new report published last week, Edison Trends showcased the results of a sample of 'anonymized and aggregated e-receipts from millions of consumers in the United States' to assess sales trends for the most popular online games, chiefly in the Battle Royale genre.

According to the analysis, Fortnite sales have dropped significantly (52%) since the second quarter of 2018. Playerunknown's Battlegrounds, on the other hand, only dropped about 2% in the same time frame. Apex Legends also appears steadier in the months since the Respawn game launched earlier this year.

Spending on online games over the last two years has shown peaks and valleys for even the most popular games. Spending on Fortnite, for example, had risen an average of 110% per month from November 2017 through May 2018, but has been in general decline ever since. However, they had their best month in December 2018, with 20% more revenue during the holiday season than their previous high in July 2018.

The peak of spending on PlayerUnknown’s Battlegrounds (PUBG) occurred in December 2017, also the holiday season, about nine months after their launch. Spending has continued to decline, but since early 2018 has remained more stable than that of Fortnite. Spending on Call of Duty: Black Ops 4 nearly equaled that of Fortnite after its release in October 2018 (there had been some build-up prior to that with pre-orders). In July 2019, players spent about twice as much on Black Ops 4 as on PUBG. As for Apex Legends, the game quickly moved past both Black Ops 4 and PUBG in spend after its release, and currently sits in a distant 2nd place after Fortnite.

Looking at Fortnite and PUBG, the two games that were around at the beginning of Q2 2018, we see a large difference in how they've weathered the last year. While Fortnite shot up into the cultural zeitgeist and saw sales increase alongside its popularity, the game has gradually seen spend drop 52% between Q2 2018 to Q2 2019. PUBG, while perhaps not reaching the same height of brand prominence that Fortnite received, has remained steadier in sales with a drop of only 2% between Q2 2018 to Q2 2019. 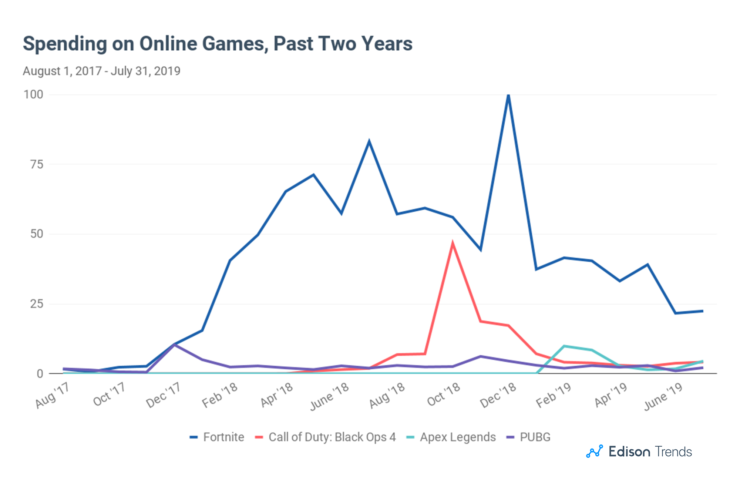 The research also looked into user loyalty by analyzing repeat purchases. In this regard, Apex Legends stayed ahead of the competition as 62% of the players who purchased something in June did it again the following month, while Fortnite stopped at 49%.