The document, of which we've grabbed a few snapshots below, reveals that Epic's Fortnite Battle Royale broke the $1 billion revenue milestone from its in-app purchases (the game itself is free to play on all platforms).

As you can see, the revenue chart keeps going higher and according to SuperData, Fortnite Battle Royale even managed to get some lapsed console players back into the action.

The report then pointed out that in May Fortnite reached the astounding number of 574 million hours viewed on Twitch, leaving only dust to see for the second title on the chart (League of Legends).

Developers of non-Battle Royale games shouldn't fret yet, anyway. According to SuperData, the growth of BR titles doesn't seem to negatively affect the viewership numbers of other genres, though the report does suggest that gamers followed by younger viewers are most at risk at losing audience to some Battle Royale game.

Looking forward to the future, SuperData expects a 625% growth in revenue for BR games from 2017 to 2018, particularly thanks to Call of Duty: Black Ops 4's Blackout mode entering the market. While total battle royale revenue was $1.7 billion in 2017, the report estimates $12.6 billion in 2018 and $20.1 billion in 2019 thanks to a substantial growth expected next year for the premium console segment.

Lastly, SuperData analyzed the Battle Royale audience and revealed that 36% of the audience came from shooter games, 11% from roleplaying games or action/adventure games, 9% from action games, 8% from sports games and another 8% from survival/crafting focused titles, with the remaining 18% listed as a mix of additional genres. 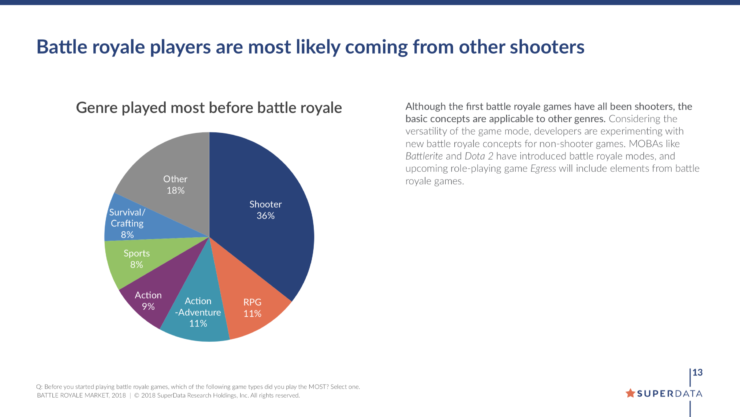 Are you an avid player of Battle Royale games? If so, which one in particular? Let us know in the comments!