In a post about fixing Pangu iOS 9 errors we shared with you that users who managed to successfully jailbreak their iPhone, iPad or iPod touch were unable to customize jailbreak tweaks in the native Settings app. This was happening due to the incompatibility of a PreferenceLoader utility which enables developers to grant configuration tabs for their tweaks in the Settings app. As promised by the developer, this utility has now been updated, fixing the missing tweak settings issue in the Pangu iOS 9 jailbroken devices. 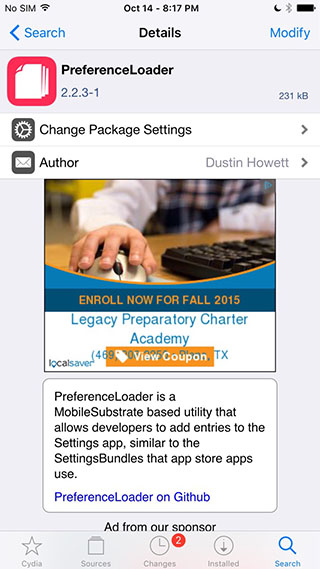 Some users who tried to install this updated utility started getting size mismatch error, Cydia crashes or other issues. If you too are facing troubles, here is what you should do:

Let us know if you were able to successfully install the updated version of PreferenceLoader utility. To fix more Pangu iOS 9 errors, check out our detailed post: Fix Pangu iOS 9 "Error at 45%," Failed Jailbreak Attempts, Cydia Crashes, and More Issues

Don't forget to share your iOS 9 jailbreaking experience with us and our readers. Pangu jailbreak solution has often remained prone to several errors and issues, but considering the team is very quick at giving us jailbreaking tools, no one seems to mind these smaller issues. Some of our readers reported giving a few tries before they could successfully finish the process. As mentioned in our earlier posts, to increase the chances of having an error-free jailbreak process, make sure you turn off Find My iPhone, Touch ID & Passcode and enable Airplane mode before starting the process. Also, if you had updated your device to latest iOS via over-the-air, install the firmware again using iTunes.

If you haven't yet jailbroken your iOS 9 powered iPhone, iPad or iPod touch, follow our guide for all the steps: How to Jailbreak iOS 9 - iOS 9.0.2 on iPhone, iPad and iPod touch