Last week it's been a very good week for fans of the Final Fantasy series, as Square Enix finally announced Final Fantasy XV's final release date on PlayStation 4 and Xbox One. The Japanese publisher has also released a new Final Fantasy XV tech demo called Platinum Demo, which allows players to play through some sequences which won't be included in the final game. Some have been disappointed in the demo's quality, but some comparison screenshots shared today by a dedicated fan show how good the demo can look in specific circumstances. 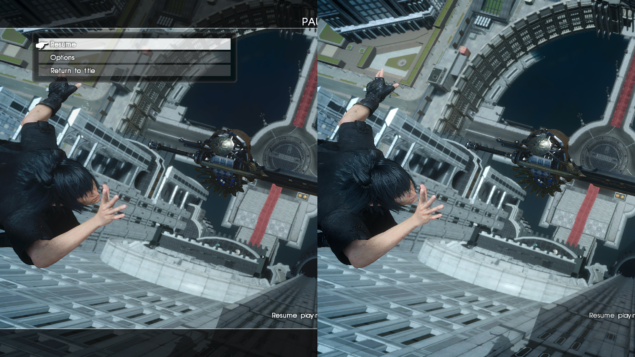 NeoGAF user Krammy has shared a couple of Final Fantasy XV Platinum Demo comparison screenshots showcasing better graphics when the game's paused. The difference, while not major, is definitely noticeable.

Following the first screenshots, Krammy has shared three additional ones under different lighting conditions, showing how nice the demo can look while paused.

Unlike what many were expecting, a PC version of the game has been confirmed during last week's Uncovered Final Fantasy XV event. According to Game Director Hajime Tabata, Square Enix is aware of the demand, but was unable to develop the game simultaneously on consoles and PC. Once Final Fantasy XV is out on PlayStation 4 and Xbox One, the team will take a look at the possibility.

Unfortunately ,we weren’t able to do simultaneous development on a PC and console version for XV. We had to focus on the console version and our goal was to maximize, optimize everything for the HD consoles. Once that’s done, then we will definitely take a good, hard look at PC and what we need to do, and consider all our options. But right now we aren’t decided, we’re still considering a lot of things.

Final Fantasy XV launches on PlayStation 4 and Xbox One on September 30th in all regions.