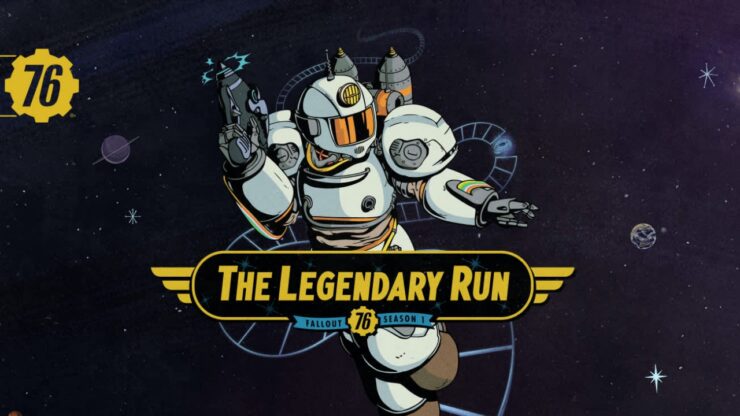 Fallout 76 just got Update 20 today, sized around 4GB on PC and 11GB on consoles. Update 20 adds the game's first Season, titled The Legendary Run, while overhauling the existing systems of Challenges and Rewards.

Additionally, the much-requested 'Looking for Group' finder feature is being added today. Titled Public Teams, it'll let you join arms with other players while enjoying buffs depending on the Team Goal.

From the makers of Unstoppables Shindig, Blast Radius, and Catch the Commie comes The Legendary Run – an exciting new way to experience irradiated West Virginia. The Legendary Run is Fallout 76’s first Season and features a boardgame-inspired theme. As Captain Cosmos, you will race the evil Dr. Zorbo across the galaxy. Your progression through the Season will be represented as pieces on a game board. Can you beat Dr. Zorbo to the finish line? You have until mid-September to find out!

Each Season brings a new progression of 100 Ranks to reach, plus exciting rewards like Atoms, Perk Card packs, and unique cosmetics. By completing Daily and Weekly Challenges, you’ll earn S.C.O.R.E. which will allow you to rank up and claim a new reward every time you do! To help you rank-up, we’ve revamped our Daily and Weekly Challenges to provide easier everyday content for players. You’ll get rewarded just for doing things you already do as you play Fallout 76! Maybe one of your Daily Challenges will be scrapping junk to get a certain resource, or crafting ammo at a workbench. Or maybe it’ll even be a more social Challenge like using photomode while you’re partied up. We haven’t changed any of the Lifetime Challenges and they will not be updated with each Season, so you will still be able to complete them and earn their one-time Atom rewards.

Each rank-up comes with its own reward, which you’ll claim directly from the game board. Keep track of your progress by accessing the new Legendary Run option in the Main Menu. There are 100 ranks in the first Season, so there are plenty of rewards to claim. If you want to jump ahead on the board, you may choose to spend 150 Atoms to gain individual ranks in the order they appear. This is completely optional and will be available starting two weeks after the Season kicks off (July 14).

Our new Public Teams system makes grouping up with others in Fallout 76 easier than ever, and offers special bonuses to players who choose to play together toward a shared team goal.