As disappointed as you may be that Samsung postponed the Exynos 2200 launch, it would have been embarrassing for the Korean giant if its latest and greatest SoC underperformed against the Snapdragon 8 Gen 1. Samsung is expected to make adjustments to the chipset accordingly, but when it comes to multi-core performance, the company might have little to worry about because, in the latest comparison, it beats Qualcomm’s best smartphone silicon to date.

Sadly, the Snapdragon 8 Gen 1 Beats the Exynos 2200 in Single-Core Tests

On Geekbench 5, new results comparing the Exynos 2200 and Snapdragon 8 Gen 1 were published while also revealing that both chipsets were fueling Samsung-branded handsets with the model numbers SM-S908B and SM-S901U. The results were published on the same date, showing that the Exynos 2200 handily beat the Snapdragon 8 Gen 1 in the multi-core category but lost to its biggest rival in the single-core test.

While the Exynos 2200 appears to be getting tested in a Samsung smartphone, a rumor is making the rounds claiming that the Galaxy S22 series will be a Snapdragon 8 Gen 1-exclusive launch. The manufacturer later stated it will unveil the Exynos 2200 at the same date as the Galaxy S22 family, which according to a previous report, is February 8. Samsung claims that there are no performance issues with the chipset, but that is probably because it does not want to upset its loyal customer base and become a target for harsh critics. 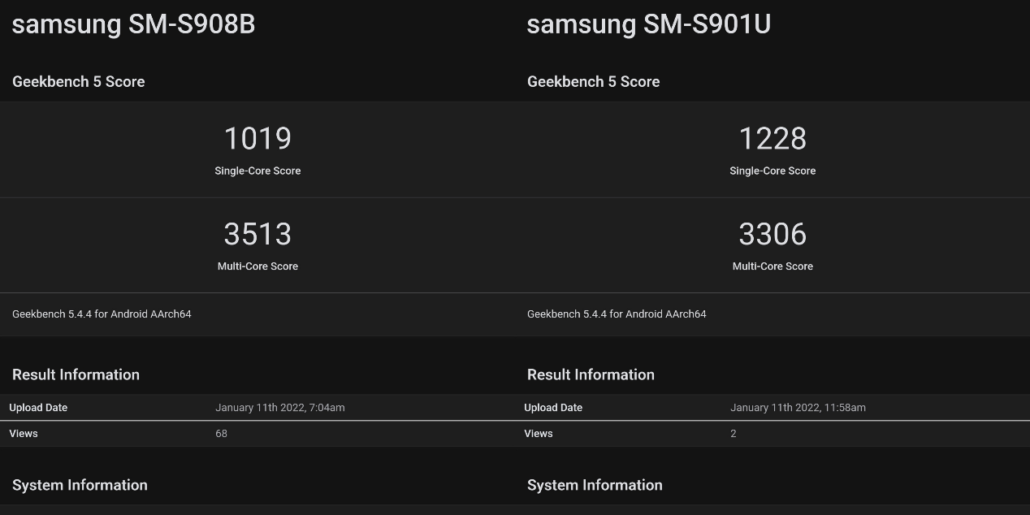 Even right now, according to the evidence at hand, the problem cannot be traced to the tri-cluster CPU configuration but the GPU, which is based on AMD’s RDNA2 architecture. One tipster claims that Samsung was running into overheating problems with the graphics processor while targeting a specific frequency and had to downclock the GPU to achieve acceptable temperatures.

Looking at how the Exynos 2200 has beaten the Snapdragon 8 Gen 1 in the multi-core category, it is clear that Samsung does not need to tweak the CPU side of the chipset.