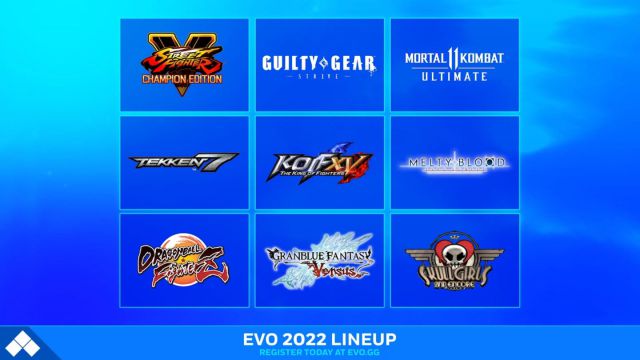 Evolution 2022 (or EVO 2022 for short) is an upcoming tournament event that arrives this summer. Following 2020’s cancelation and 2021 being an online event, the tournament series will finally be making an in-person return this August at the Mandalay Bay in Las Vegas, Nevada.

Watch the reveal below:

It’s surprising to see titles like Granblue Fantasy Versus, seeing as how that game isn’t exactly on the same caliber of popularity that, say, Guilty Gear -Strive- and Tekken 7 are. Others, like Skullgirls, make another appearance, having been absent from the event for some time. Once again, it's worth noting that these events will be made in person.

A notable outlier from this list would be the Super Smash Bros. series, as Melee and Ultimate are nowhere to be seen. However, EVO’s Twitter account shared a post that explained that, while they wanted Smash here, Nintendo decided to disagree for an undisclosed reason; though it could be assumed that the Nintendo and Panda Global collaboration has something to do with that...

All nine of the main games shown all have active registration windows, and those conclude on June 10th, 2022, via EVO 2022’s Smash.gg page. The games’ stream schedule has yet to be revealed, but that will probably come much closer to the event, in late July. If you would like to read more information about EVO 2022, you can view their website right here.

Super Smash Bros Ultimate Will Not Be Part Of Evo Online