We're quite close to an iOS 6.1 untethered jailbreak release, which will also be compatible with iOS 6.0.1 and iOS 6.0.2. A number of well known jailbreak developers have been working on this jailbreak and they have officially formed a new dev team. Today the Evad3rs Dev Team was formally introduced to the jailbreak community and it comprises of some of the most accomplished jailbreak developers of our time. 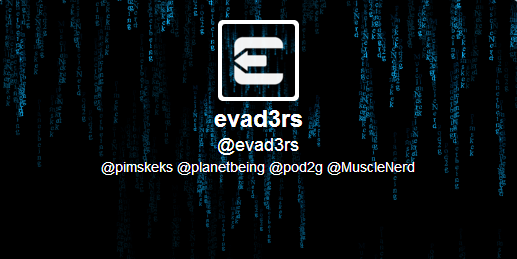 It was Joshua Hill a.k.a Pod2g who first tweeted about the formation of Evad3rs Dev Team. He said the following in a tweet:

We (+ @MuscleNerd @planetbeing @pimskeks) are the @evad3rs. We don't take any donations ATM, please don't be fooled at donating to others.

We have been closely covering all of the developments related to the new untethered jailbreak that everyone is waiting for. Initially it was revealed that both Pod2g and Planetbeing were working on it together. Only last week they revealed that they had found two new vulnerabilities and had made considerable progress towards a working iOS 6.0.1, 6.0.2 untethered jailbreak. Before that happened, Planetbeing had already posted a picture of his untethered iOS 6.0.2 jailbroken iPhone 5.

Pimskeks involved came to light just yesterday, he to happens to be involved in the development of this new jailbreak. MuscleNerd, originally of the iPhone Dev Team fame, is also a part of the new Evad3rs Dev Team. It is not yet known whether he has bid farewell to the iPhone Dev Team. All four of them are truly amazing apart from being highly skilled developers.

The jailbreak scene, as it stands now, is being held up due to iOS 6.1 release. The developers have already made clear that the new untethered jailbreak won't be released until and unless Apple releases iOS 6.1 firmware. This is being done in order to save the exploits from getting patched. When that release does take place, it will definitely carry the name of Evad3rs Dev Team. The official Twitter account of Evad3rs Dev Team, on which no tweets have been posted up till now, has more than 17,900 followers as of this