Moment ago Apple seeded iOS 6.1 beta 3 for iPhone, iPad and iPod touch to registered developers. This the third beta of iOS 6.1, a much needed major update for the iOS platform. Updates to the platform are first seeded in beta stage to developers so that they can get their apps ready. In case of iOS, there are also jailbreak tweak developers who benefit from said beta firmware because they get to get their tweaks ready before the public release.

If you are one of those developers, or simply a chap who likes to jailbreak Apple beta firmware, it is my pleasure to inform you that you can jailbreak iOS 6.1 beta 3 on iPhone and iPod touch. The jailbreak is going to be tethered and will not be applicable on most recent iOS devices. 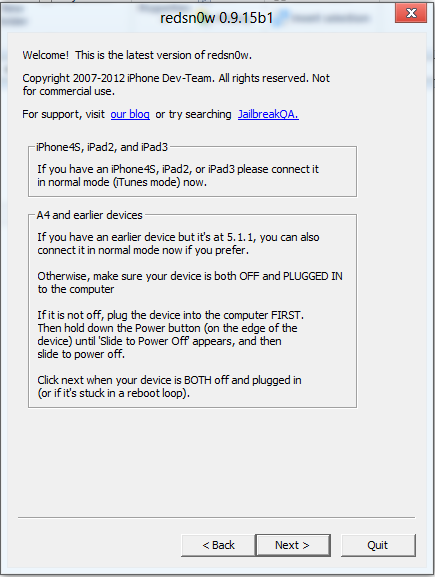 The devices on which you can jailbreak iOS 6.1 beta 3 are limited. For instance if you have an iPad mini, a fourth generation iPad, an iPhone 5, iPhone 4S, a third and even a second generation iPad you're not in luck. You can not jailbreak iOS 6.1 beta 3 on these devices because they are not susceptible to the Limera1n bootrom exploit. The devices which are susceptible to Limera1n bootrom exploit are the fourth generation iPod touch, iPhone 3GS and iPhone 4.

Even in the case of these devices, when you jailbreak iOS 6.1 beta 3 it is going to be a tethered jailbreak. If you device runs out of battery or you have to power it off for some reason, you will need to connect it to the computer and do a tethered boot using redsn0w or else the device will not function. This is the caveat with tethered jailbreak and as of now no iOS 6 untethered jailbreak is on the horizon.