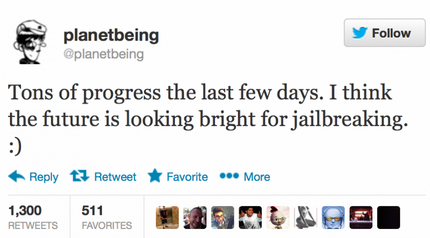 Earlier today he tweeted the following: "Tons of progress the last few days. I think the future is looking bright for jailbreaking. :)" and his tweeted was replied to by another jailbreak developer named pimskeks who said: "yeah @planetbeing looks like we made some #awesomesauce lately :D". This goes to show that jailbreak developers are working very closely in order to gain an iOS 6.1, 6.0.2 untethered jailbreak. We already know that Pod2g is working on this jailbreak as well, with both of them. He and Planetbeing have recently found two new vulnerabilities which have aided immensely in the process of creating this jailbreak.

We, the jailbreak hungry population, should bear this in mind that there exists no possibility that an iOS 6.1, 6.0.1 untethered jailbreak release will take place before Apple rolls out iOS 6.1. The jailbreak will not be released before that happens in order to save the exploits from getting patched. iOS 6.1 GM build is said to be ready, which means that we have to wait for a couple of weeks for iOS 6.1 to drop.