All that is in way of a new untethered jailbreak is the 6.1 iOS release, or lack thereof. The jailbreak developers have already made it clear that they won't be releasing any new jailbreak until and unless Apple goes through with 6.1 iOS release. Pod2g went so far as to urge Apple, via Twitter, to release iOS 6.1 for iPhone, iPad and iPod touch. I'm sure that many in the jailbreak community share the exact same sentiments. 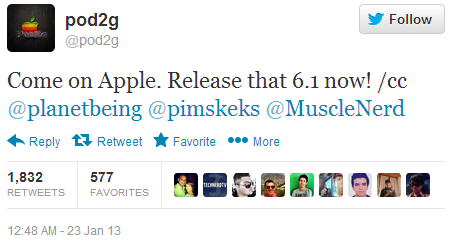 There exists a solid logical argument for not releasing the much awaited untethered jailbreak before Apple goes through with 6.1 iOS release. If a new jailbreak is released before Apple releases the new firmware, it has all the time in the world to patch those exploits and make the jailbreak useless for future firmwares, particularly a large one such as iOS 6.1. This is the number one problem with kernel based exploits, sadly, they're all jailbreak developers have up till now. Its no secret how hard to has been to come up with exploits that can be used in order to make an untethered jailbreak for iOS 6.0 and higher.

The jailbreak developers have been working quite hard in developing an untethered jailbreak for iOS 6.0.1 and iOS 6.0.2. They're hopeful that the same vulnerabilities would work with the upcoming firmware, though that can only be confirmed after 6.1 iOS release takes place. This untethered jailbreak will be compatible with new devices such as iPhone 5, iPhone 4S, iPad 4, iPad mini and the iPod touch 5G. Needless to say there are a lot of people out there anxiously waiting for this untethered jailbreak to release.

On the other hand we have jailbreak developers who are anxiously waiting for 6.1 iOS release. They have made considerable progress and are only waiting on the new firmware. Pod2g tweeted the following, his frustration visible for all to see:

Jailbreaking has always been a cat and mouse game. Nevertheless sooner or later Apple does have to go through with 6.1 iOS release, as it brings some much needed bug fixes and improvements for the much criticized Apple Maps application. When it drops, we can expect a new untethered jailbreak in the very near future.

Apple iMac 21.5” Renewed Retina 4K Core i5 Is Up For An Amazing Discount Offer For A Few Hours