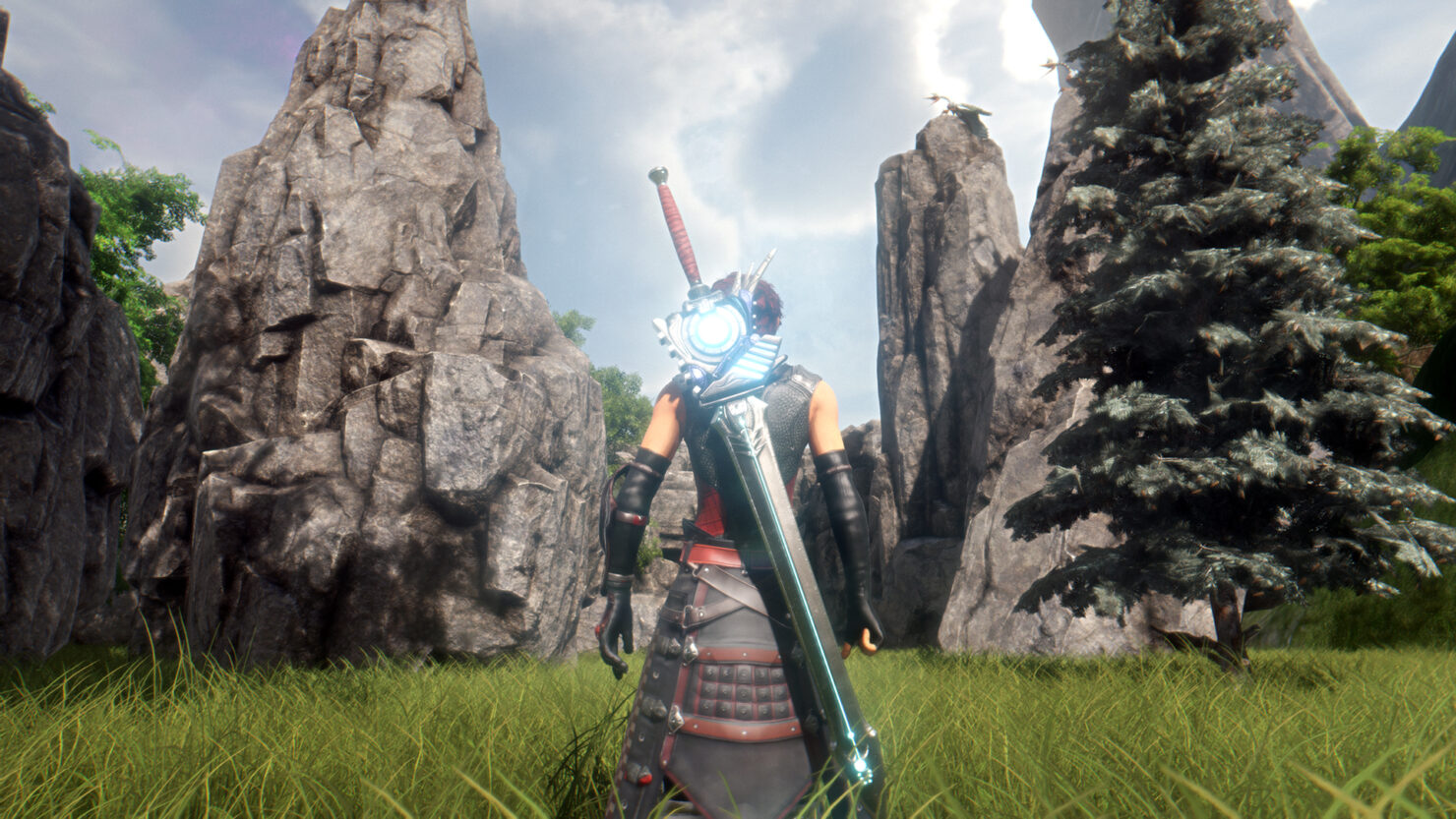 Hectic events such as Gamescom are definitely not the best places to try out role playing games, but there were still plenty on show during this year's edition, such as the highly anticipated Final Fantasy XV, Obsidian's Tyranny, King ART's The Dwarves and many others. Between one big AAA title and another, I also had the chance to try out a less known role playing game called Edge Of Eternity, currently in development by French indie Midgar Studio, which holds incredible potential.

Edge Of Eternity has been defined in the past as an indie tribute to both Western and Japanese role playing games, but I personally feel that this definition does not do justice to the game. While it's true that many of the game's features are inspired by some of the best RPGs ever released, it's also true that the team is giving each and every feature a new spin, something that becomes evident as soon as the game begins.

At first glance, Edge Of Eternity may not feel different from some recent Japanese role playing games, especially those featuring a slightly more open experience like the Xenoblade Chronicles games and the already mentioned Final Fantasy XV, with players roaming a huge overworld map to reach the next objective while taking on side quests, defeating enemies and more. The similarities with these games, however, end as soon as the first battle begins.

Edge Of Eternity features a highly strategic combat system which requires a good understanding of the game's mechanics, with a lot of focus on positioning and range. During battles, players will have the ability to move characters to different hexes,  use a regular attack, an item or unleash powerful special skills with different ranges and properties. As already mentioned, range plays a big part during battles, as skills can only be unleashed if the character is in the correct position. Those who have played the last two entries of the Wild Arms series might find some similarities, but I've been assured that the Media Vision developed games had no influence on the battle system.

My first battle during the hands-on session required quite a bit of effort, lasting quite a while, and Midgar Studio CEO Jérémy Zeler-Maury confirmed that it's a precise design choice. In Japanese role playing games, random encounters are mostly a button mashing affair, with players confirming regular attacks over and over until enemies are defeated. In Edge Of Eternity, the team wants random battles to matter as much as boss battles.

The highly strategic nature of the Edge Of Eternity combat is also enhanced by a particular mechanic which should make battles less punishing. As abilities in the game are tied to weapons with a rather interesting skill system, players will be able to make some adjustments on the fly during each and every encounter, switching weapons as needed to be able to use a specific skill. Preparation is always going to be very important, but being able to adapt to the situation will be just as critical, especially considering that weather conditions, which can change randomly during the game, will influence battles in different ways.

While Edge Of Eternity may look like a Japanese role playing game at first glance, characters and story will be far from what players might expect. While chatting with Jérémy during the hands-on session, we both convened that big publishers have pretty much forgotten those who grew up with classic JRPGs, who are now in their 30s and have very little appreciation for the usual "gather a band of heroes to save the world" story. For this reason, Edge of Eternity will do away with these clichès, featuring a darker and more mature story, where the consequences of the characters' action will weigh heavily upon them.

The way the choice and consequence system will work in Edge of Eternity is going to be different from what both Japanese and Western role playing games do at the moment. This system won't be strictly a gameplay mechanic, as there won't be a way to keep track of the choices that have been made so to make a different one in the next playthrough. What players will do, however, is witnessing the consequences of their actions and how they have changed the world. Jérémy mentioned entire villages getting destroyed as one possible consequence, so you might want to be careful when you make choices in this game.

One of the features that definitely needs to be mentioned is the soundtrack.  Legendary composer Yasunori Mitsuda contributed some orchestral tracks, and they sound simply amazing, with a real orchestra recording that makes them even better. Jérémy gave me a preview of one of the tracks and there is just one way to describe it: epic.

During my chat with Jérémy, I also had the chance to talk about some technical aspects, and the way the team is handling development reinforced my idea that Edge Of Eternity is, first and foremost, a labor of love. Last year, Jérémy mentioned to us that the team was having some issues with the Xbox One version of the game, but he confirmed to me that all issues have been fixed. He is also personally testing the three versions of the game at the same time, in order to make sure that none ends up falling behind. Regarding frame rate, Jérémy confirmed that the console versions will run at 30 FPS, while the PC version will have an unlocked frame rate for those who wish to push things further. The PC version, unfortunately, may not get DirectX 12 support at launch, as the game employs technology that is currently unsupported. All three versions of the game will also get free updates which will add more content, and no DLC packs are currently being planned.

The similarities with Xenoblade Chronicles and its sequel prompted me to ask about a possible release of Edge Of Eternity on Nintendo consoles. The game will not launch on Wii U for obvious reasons, but it may also not reach the Nintendo NX if the console is indeed a hybrid console as rumored. Being a small team, the folks at Midgar Studios don't know much more about the NX than we do, but Jérémy was pretty clear on this matter.

Edge of Eternity is still in a rather rough state, but it has a lot of potential, so it will be interesting to see how everything will evolve in the future. The game is quite far from release, with a late 2017/early 2018 planned launch, so Midgar Studio has plenty of time to polish the game and make sure it can deliver fully on its promises.