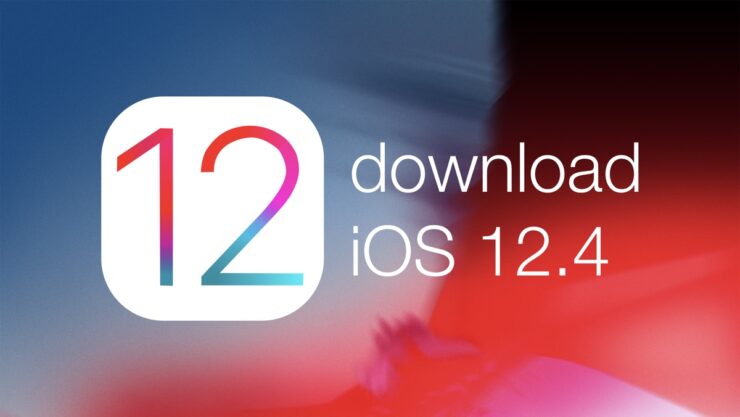 It's here. You can now download iOS 12.4 final version for iPhone, iPad and iPod touch. It features a handful of changes which we've outlined in the changelog.

Pretty much all the noise right now surrounds iOS 13 and all the great features it brings to the table. But the harsh truth is this: the update won't be available for everyone until later this year alongside new iPhones. This means that you have to make do with the current publicly available version of Apple's software, and the latest one in the lineup, iOS 12.4, is now available for download.

So, what is new in this release? Let's have a look at the changelog:

iOS 12.4 introduces iPhone migration to directly transfer data from an old iPhone to a new iPhone, includes enhancements to Apple News+ and improves the security of your iPhone or iPad. This update:

Apple News
- Makes downloaded issues accessible in the My Magazines section, both offline and online
- Adds all publications in Apple News+, including newspapers, to the catalog at the top of the News+ feed
- Adds the ability to clear downloaded magazine issues by selecting History > Clear > Clear All

As you can see, the highlighting feature of this release is added support for Apple Card. If you live in a supported region then you can get in on the action right now and download iOS 12.4 instantly. You can do it over the air by simply connecting to WiFi, then heading over to Settings > General > Software Update. Once the update shows up for download, just hit the Download and Install button. The update will first download straight onto your device, then it will be verified with Apple, and eventually installed on your device.

If you want to perform a clean install of iOS 12.4 final version, you can totally do that as well. Simply grab the IPSW file from the links below for your device and then follow the guide outlined here: How to Clean Install iOS 12 on iPhone, iPad, iPod touch [Detailed Tutorial]

Remember, if you are going to download iOS 12.4 and perform a clean install, you will lose all your files and data. Make sure you have backed up everything to iCloud or iTunes before going ahead. Once the installation is complete, you may restore your files and settings as you normally do. Lastly, if you aren't having any sort of problems with your iOS device at all, then it is recommended that you take the over the air route in order to download iOS 12.4. It's fast, easy and doesn't involve taking backups or anything.

Let us know in the comments section below what you think about today's update.

Download iOS 12.3.2 for iPhone 8 Plus with Portrait Mode Fix