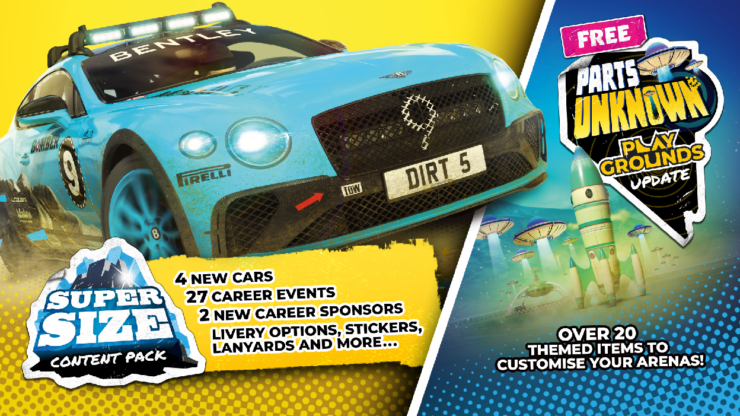 Dirt 5 is about to get its biggest update yet on July 20th, a combination of free content (two brand new circuits set on the outskirts of Rio de Janeiro, the Parts Unknown Playgrounds Update) and the Super Size Content Pack expansion (four new cars with fresh new liveries, 27 new bespoke events for the Career Mode, two extra sponsors and several customization items), included for customers with the Amplified/Year One Edition and available for purchase for everyone else.

However, PlayStation 5 players will also notice improvements to the DualSense controller and 3D audio implementation of Dirt 5. Indeed, seven months ago the developers had already promised improvements for the DualSense experience; now they're finally delivering it, as explained by Codemasters Social & Community Manager Chris Groves on the PlayStation Blog.

Along with all of that, players on PS5 will feel more connected to Dirt 5 than ever before with this update, as we implement full haptics and adaptive trigger support for the DualSense controller. These enhancements allow Dirt 5 to give you more feedback throughout every event. Notice the changes in traction across different surfaces, feel the brake trigger pushing against you as you slow down, sense the clunk of a gear change, and find the limit of adhesion as you steer and accelerate through corners.

Haptic feedback and adaptive triggers will help racers make the right decisions and maintain control of the car, as Dirt 5 sends a bucket-load of information to the DualSense pad and through your fingertips. It’s a racing sensation that must be played to be believed.

3D Audio in Dirt 5 for PlayStation 5

Plug in a stereo headset to your PS5 DualSense controller to add another layer of immersion when playing Dirt 5, as we’ve further refined our use of its 3D audio capabilities. Hear the roar of other cars racing all around you thanks to our dynamic audio range, and hear track-side speakers and spectators rise and fall in volume as you race by them. Our attention to detail with audio in Dirt 5, paired with the 3D audio support, creates a true soundscape that takes the overall experience up another notch.

We'll try to find out whether DualSense support will ever make it to Dirt 5 on PC, given that other developers like 4A Games and Ubisoft have successfully implemented it in Metro Exodus: Enhanced Edition and Assassin's Creed Valhalla.

Connect PS5 DualSense Controller to Android Smartphones [How To]