We haven't head much on the DirectX 12 front, or the API front in general, for a while now. At this year's SIGGRAPH however, Intel demoed DX 12 and showed impressive results. TDP Constraints are one of the biggest problems in Mobile Gaming, but with DirectX 12 the TDP of the device in question can actually drop by as much as 50% or you can opt for a performance increase of ~60%. 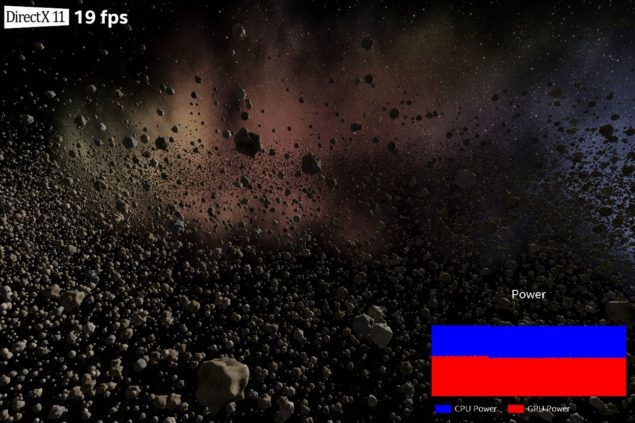 DirectX 12 is, as I am sure you all know, a low level API. It works by reducing the CPU Overhead or the CPU Bottleneck effect by allowing the CPU to issue more drawcalls among other things. However, while this result is mostly performance increase in the Desktop sector, in the mobile side of things this is actually very useful. Since a Mobile Platform is always working with power and thermal constraints, both the CPU and GPU share a TDP Budget if you may, so any lack of power consumption by one can either be utilized in a zero sum or result in a decreased TDP rate. This is exactly how Intel has manged to show a 60% performance per watt boost in the mobile platform. This is pretty amazing news considering this is not a new architecture or a hardware change we are talking about but a new soft update.  Observe the two pictures below while keeping the baseline above in mind:

Now the actual device was a Surface Pro 3 tablet running a homebrewn  demo. The scene contains 50, 000 assets in the forms of asteroids. The application had the capability to dynamically and seamlessly switch between DX11 and DX12 modes while showing FPS and plotting CPU and GPU power graphs. The baseline above shows the demo running on DX 11 and netting a total of 19 frames per second. When the program enters DirectX 12 mode, and the FPS output is locked and constant, the power consumption of the CPU falls. This means you are getting the same performance at a drastically lowered power requirement.

In the second example the fps isn't locked and the CPU overhead is reduced, allowing the GPU to output more frames and increasing the FPS to 33 frames per second. In short in one mode, the CPU can down clock itself and save power an in another it can increase rendering performance by as much as 74%. The thing you have to realize is that their wording is slightly misleading. You will not get remarkable energy savings and performance increase at the same time. This is a thermally constrained scenario so it is acceptable for there to be 100% utilization. This means that in DX12 mode, with the CPU downclocked, the iGPU not only has lower cpu overhead, it has more power to run with, resulting in unusually high gains. Nonetheless, this is an impressive achievement and should have serious potential in mobile gaming segment as well as NUC devices.

AMD Catalyst 15.10 Beta Now Out, Optimizes for Ashes of the Singularity