[Editorial] I was going through AMD's blog posts and the Mantle White Paper and found something very interesting.It appears that AMD is finally taking steps towards the Open Mantle promise they made long ago, to be sure these are still baby steps but definitely in the right direction. AMD has just recently released the White Paper on Mantle API, and while this paper isn't very heavy on the code part (which is the back bone of open source) it does describe the API in excruciating detail and reveal a very interesting tidbit of information. 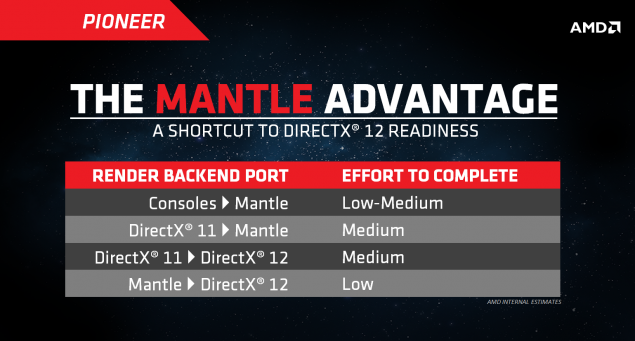 Now AMD has recently promoted their Mantle API in a blog post and also published a White Paper on the same, which can be found here. The blog post details Mantle's vision and how AMD sees it faring in an environment that contains DirectX 12. AMD states that there is a very long time to go before DX12 sets in motion completely, which means that during the time span, developers will be better suited to switching to Mantle API. The White Paper is about 14 pages long and lists all the features and structure of AMD's famous API. Now here is the thing, part of this white paper has been available for quite some time (around a month to be exact), but the blog post mentioned something very very interesting. I have taken the liberty to quote the relevant portion:

Above all, Mantle will present developers with a powerful shortcut to DirectX® 12, as the lingual similarities between APIs will make it easy to port a Mantle-based render backend to a DirectX® 12-based one if needed or desired. In addition, Mantle developers that made the bold decision to support our historic API will be well-educated on the design principles DirectX® 12 also promises to leverage

Holy cow. AMD has basically negated any and every reason to not use Mantle API. There is now no apparent reason for developers to refrain from using Mantle API. Since we have a long drought till the time DX12 releases for good, and even longer before it's properly utilized, Mantle API is the ideal solution. And because any render can be ported with very little effort to DX12, developers need not fear having to choose sides. Not only does AMD's API make multiple backends (DX12 and Mantle) very easy, but you can simply port it if you are aiming for a single render backend. Since AMD is one of the major interests in the DX12 consortium, they do not want to do anything to jeopardize DirectX 12; but at the same time, they want to utilize the headstart their homemade API has and this is the perfect answer. If Mantle API can be ported to DirectX 12 without any major hassle, than that basically means that AMD is giving devs an opportunity to make a low-level optimized game with future-proofed icing on the cake. Finally here is a picture gallery of few of the technical diagrams from the paper.