Saurik has finally released an update for Cydia Installer. The latest Cydia 1.1.17 is now compatible with iOS 8.3 TaiG v2 jailbreak. This fixes the issue "cannot identify your device" which users received while trying to access Cydia using their iOS 8.1.3 - iOS 8.3 jailbroken devices. 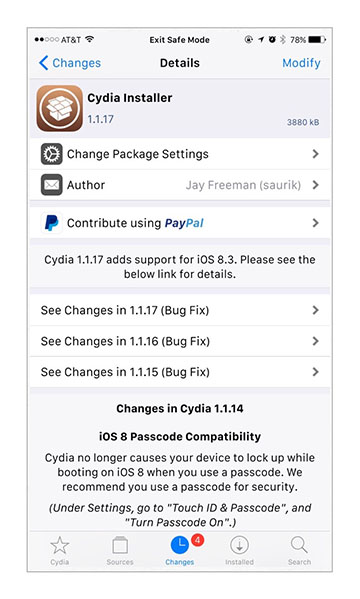 If you have jailbroken your iPhone, iPad, or iPod touch using TaiG's jailbreak tool then you would get an "Essential Upgrade" popup. Make sure to install the latest Cydia iOS 8.3 v1.1.17 to make it compatible with the latest OS. This, however, still doesn't fix the Cydia Substrate issue which was reported earlier. As shared with our readers before, Saurik has clarified that the team TaiG will have to update kernel patch to fix the issue with Substrate. Until then, don't try to install tweaks not yet compatible as you might get into endless loop.

TaiG mentioned on their Weibo account that they would release an update to TaiG 2.0 today. We have yet to see it coming though. We would definitely update you folks once it happens as it would solve many of your troubles with choosing and installing your favorite iOS 8.3 jailbreak tweaks.

On iOS 8.3, Cydia would report that it “cannot identify your device” while trying to access your account. This was due to changes on iOS 8.3, and has been fixed.

Recent versions of Cydia have rejected “local” repository URLs. This was due to an overly-limited filter on acceptable URLs. You can now again use local repositories.

Stay tuned for more iOS 8.3 - iOS 8.1.3 jailbreak updates, fixes, and tweaks. As with previous years, we will soon be sharing with you an extensive list of tweaks as they get updated to the latest jailbreak version. Don't forget to share your favorite JB tweaks and apps.

Cydia 1.1.18 fixes a bug introduced in 1.1.17 that would cause SpringBoard to lock up if it was killed by a user with the iOS task switcher.

A “proactive” fix for iOS 8.3 added in Cydia 1.1.17 caused SpringBoard to lock up if users killed Cydia using the iOS task switcher. This fix is designed to fix an issue that should be present on iOS 8.3, but TaiG’s jailbreak seems to provide a workaround in the form of a kernel patch. This will be investigated for later releases, but in the mean time the fix has been removed.