Facebook has a lot of standalone apps. For instance there's the Facebook Poke app, recently recently to reinvent poking on the social network as we know it. The company has rolled out a new update of the Facebook Messenger app. This new app comes with a pretty big feature which hints at what niches Facebook could be looking to break in to in the near future. Using the new Facebook Messenger apps, users can call Facebook friends for free through their iPhone or any other compatible iOS device. 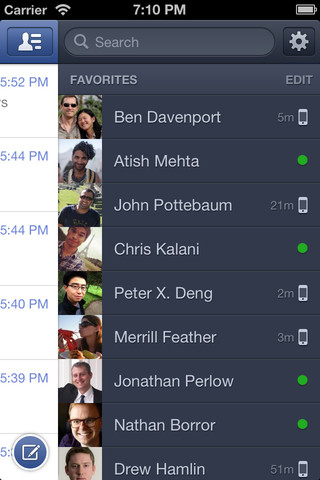 The term instant messaging takes us back in the days when Yahoo and MSN Messenger were widely used around the world. Today those obsolete services have been replaced by much more advanced and sophisticated cross platform services such as Whatsapp, Viber, Skype etc.

On the other hand, there's Facebook. The world's biggest social network with over a billion users. In recent years Facebook has redefined how we communicate over the internet. Slowly but surely we have seen it trying its hand out at instant messaging. It all started with Facebook chat which subsequently ended up supporting video chat. Early last year the standalone Facebook Messenger app was released for iOS and Android. Obviously one can chat with their Facebook friends through the native app, but they decided to release a standalone app any way.

The latest update of Facebook Messenger app brings the ability to call Facebook friends for free via iOS devices. Other features include the ability to send short voice messages among a host of performance and stability improvements, as well as essential bug fixes. Facebook Messenger app is available as a free download and is compatible with any iPhone or iPod touch running iOS 4.3 or higher firmware. There's no native iPad version.

While the new update does allow users to call Facebok friends for free, there is a caveat. Free calling through this app will use your existing data plan. Facebook says that the free calling feature will be rolling out over the next couple of weeks. At this point in time it is available to users in Canada only. You can download the new Facebook Messenger app for iOS from here.