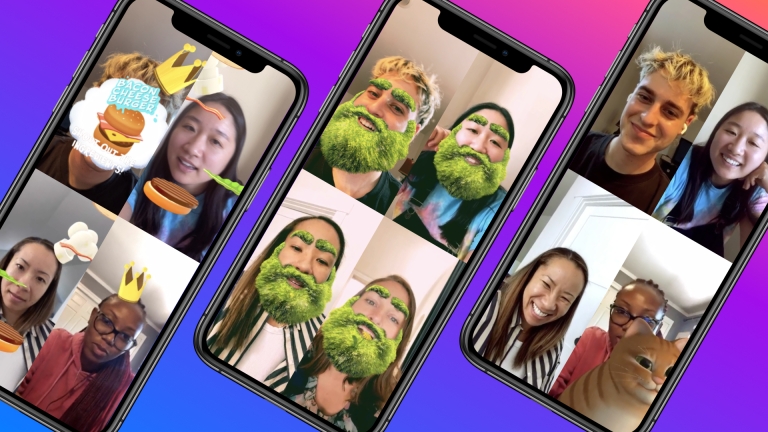 Facebook has started rolling out brand new AR experiences to video calls on Facebook Messenger and Messenger. The company states that the new "Group Effects" will make video calls on its platforms a lot more entertaining.

Group Effects finally allow everyone to argue themselves on a video call, enabling a "more fun and immersive way to connect with friends and family." While the new AR experiences are limited to Messenger and Messenger Rooms, Facebook has stated that they will be available on Instagram soon as well.

Users will be able to choose from over 70 Group Effects; this includes a game in which "you compete to build the best burger to an effect with a cute orange cat that enters everyone's screens."

If you want to try out the new Group Effects, you can start a video call or create a room in Facebook Messenger. Once done, tap the smiley and choose Group Effects from the effects tray.

In addition to the new AR experiences, Facebook Messenger is also getting new "suggested word effects." This feature triggers an animation within a chat whenever you send a message like "happy birthday" or "congrats."

Facebook first announced this feature back in August, and it is now rolling out to both users on iOS and Android phones and should be available to everyone in the coming weeks.

Additionally, some of the other features rolling out to Facebook Messenger include new James Bond "soundmojis," four haunted world AR effects for Halloween, and a couple of new chat themes.

Facebook has also announced that it will expand its Spark AR Multipieer API, which will let more developers build Group Effects. The API allows all the creators and developers to create dynamic, real-time interactive effects that will enhance the video calling experience for everyone using them.