We aren’t really sure how we missed this one earlier, but an official leaked Android 4.1.2 JellyBean build has been making rounds on various Android portals since December 28th last year. spc_hicks09, a senior XDA hotshot, was able to get, what he calls an accidental, Over-The-Air OTA Jellybean update on his Moto Droid RAZR CDMA. It is believed that this Jellybean release for the Motorola Droid RAZR CDMA wasn’t intentional but still one Dee Dee button push sent it to many on the Christmas eve.

And if you still don’t believe it, here is a screenshot of the phone with the update fully loaded. 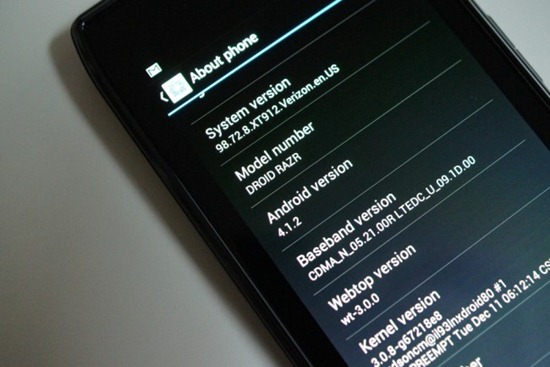 In case you were one of the lucky few who managed to get their hands on this update, there is no method to revert back to Ice Cream Sandwich. However, we don’t believe that it will remain this way since developers are already in process of producing customized ROMS etc.

For those who are unaware, the Android 4.1.2 Jellybean update comes with a fat load of features and functionalities to boost your experience. We aren’t sure of the Motorola specific features in this update for the Droid RAZR, however, as a rule of thumb, you will be getting Android beam, improved browsers, fixed calendar, revamped gallery and face unlock.

And what about those who didn’t get updated to Android 4.1.2 Jellybean until now? Well, since some of the receivers of this update on their Droid RAZR’s were from XDA, so they’ve already pulled it from their phones and made it available for general public usage. This means that you can now manually update your Motorola Droid RAZR to Android 4.1.2 Jellybean official version without having to wait for the non-accidental OTA release.

The manual method, posted at XDA, is a bit complex and requires you to have some knowledge of handling Android OS at an advanced level. You’ll be needing stuff like MattlGroff’s RAZR utility along with a .RAR extractor with some goodies available in Play Store to do the deed.

As a word of caution, there aren’t many feedbacks for this update and you’d be on your own if anything screws up.

In case you are interested in getting this update on your Droid RAZR, head to the official XDA leak thread posted here. The thread has complete installation details and utility links along with feedback from those who already tried and tested the build.