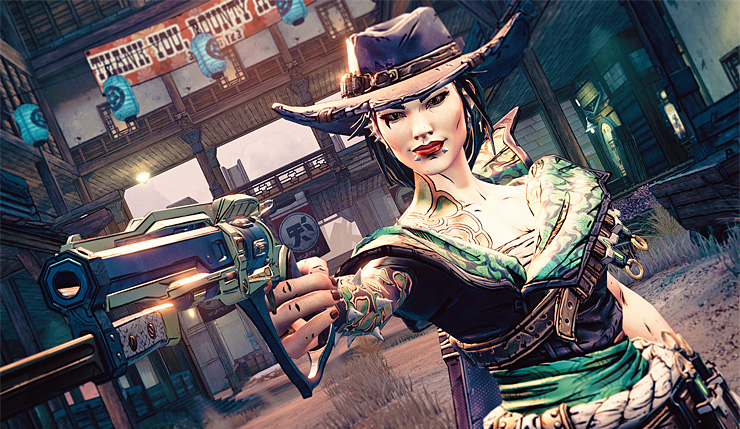 Gearbox has promised the Borderlands 3 Season Pass will explore all sorts of different locations and genres, and they’ve delivered with the casino-themed “Moxxi’s Heist” and Lovecraftian “Guns, Love, and Tentacles” updates, which will soon be followed by a trip way, way out west. The newly-announced Bounty of Blood: A Fistful of Redemption update takes players to the Western-themed planet of Gehenna, which has been overrun by the Devil Riders gang and a variety of genetically-modified monsters. The new DLC was announced during the latest episode of The Borderlands Show, which you can check out below.

We don’t have a trailer for Bounty of Blood just yet, but here are a few screens:

Here’s a few more official details about Bounty of Blood:

Those not far enough along in Borderlands 3 to experience new content will be able to create a new character and level-boost directly to it. Bounty of Blood is part of Borderlands 3’s $50 season pass, which will eventually deliver four campaign add-ons.

Gearbox also announced the new Takedown at the Guardian Breach raid, which will be free to all players, designed for full teams of four players, and should present an “extreme” challenge. The raid takes place on “Minos Prime” and will offer a variety of new enemies, including what appears to be a Minotaur-like final boss. Prepare yourselves!

Borderlands 3 is available now on PC, Xbox One, PS4, and Stadia. The Takedown at the Guardian Breach raid arrives on June 4 and the Bounty of Blood story DLC drops on June 25.