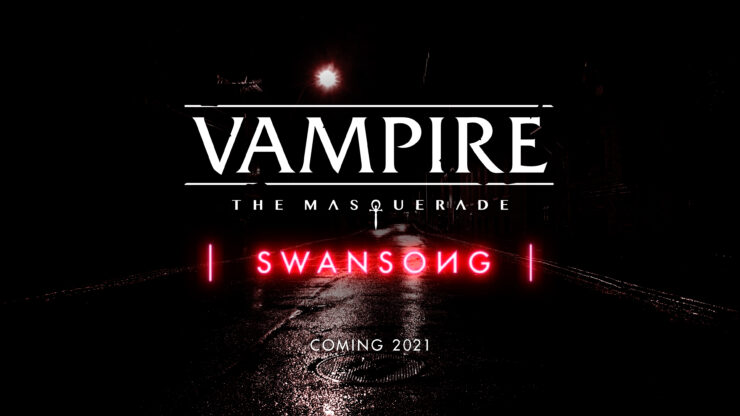 Vampire: The Masquerade - Swansong was confirmed at PDXCON to be the title of the VtM RPG in development at Big Bad Wolf (the studio behind The Council). The game is scheduled to be released in 2021; no specific platforms have been confirmed as of yet.

At the studio, we're long-time and passionate fans of the tabletop role-playing game Vampire: The Masquerade. We have wanted to create a video game inspired by this universe for several years now. This project fits perfectly with Bigben’s desire to expand its catalogue of narrative games. We are very happy to be unveiling it together.

My past experience as an editor and author of role-playing games, and also as Editor-in-Chief of an RPG magazine, is proof of how important this project means to me personally. Just like me, many fans have been waiting a long time for a new adaptation of this cult game, which will be developed by one of the most talented studios of its generation.

According to the press release, the developer's goal is to continue specializing in 'narrative RPGs' with Swansong, its most ambitious project yet.

The adaptation is said to be respectful of the rules of Vampire: The Masquerade's fifth edition. The story will see players taking control of three vampires from different clans within the Camarilla; the plot will move between their intertwined tales to offer different points of view and thus attempt to 'unravel fact from fiction'.

Swansong is the third Vampire: The Masquerade game currently in development. The first to be released will be Coteries of New York, which was confirmed at PDXCON to be launching December 4th for PC and Q1 2020 on Nintendo Switch, with potential PlayStation 4 and Xbox One ports coming later. The second is, of course, Bloodlines 2, which got recently delayed to late 2020 to improve its quality.

Vampire: The Masquerade – Coteries of New York is Getting a New Standalone Expansion