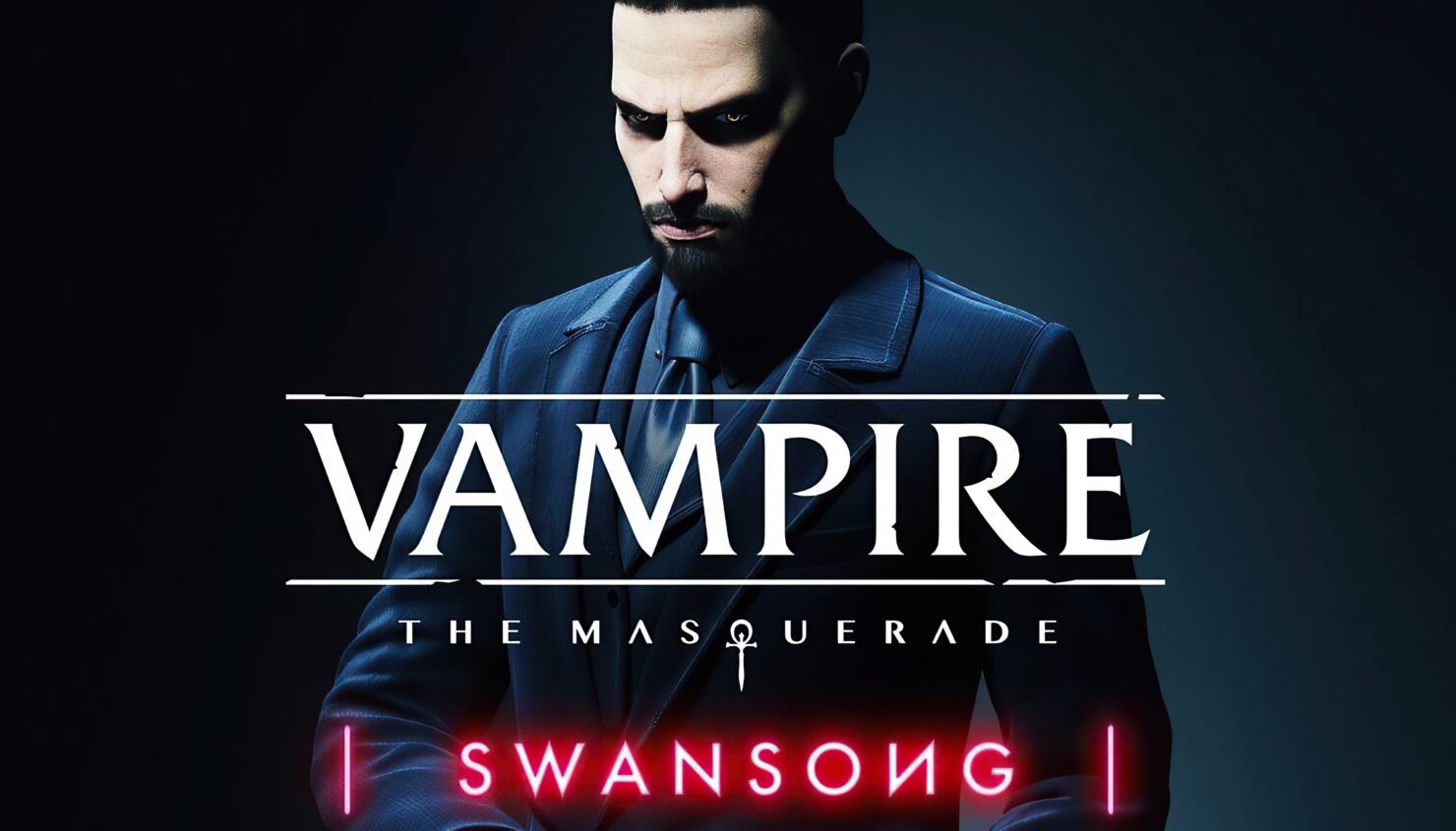 I've recently had the chance to play one mission of Vampire: The Masquerade - Swansong, the game due for release on May 19th after a couple of delays.

Developed by Big Bad Wolf, the French team behind The Council, Swansong is a narrative RPG that sticks relatively close to the beloved tabletop's fifth edition. Players will get to fill their character sheets, choosing how to distribute physical, social, and mental attributes, which in turn influence Skills like Rhetoric, Intimidation, Persuasion, and Psychology (Dialogue); Security and Technology (Exploration); Deduction and Education (Knowledge). That's just the tip of the iceberg, anyway, as Disciplines are the real vampiric powers, and they will be unique to each playable character.

Disciplines can be upgraded as well, and using these powers works in the exact opposite way of using a Skill. The game's UI shows two meters, a blue one for Willpower and a purple one for Hunger. You'll start with a full bar of Willpower points (which can be replenished through consumable items) and spend them when using a Skill; conversely, choosing to use a Discipline will increase your vampire's Hunger meter. As you would expect, keeping the Hunger from going too high will be critical to avoid succumbing to bloodthirst and causing unbridled carnage. Some items can lower Hunger, though the most common way will be to feed on a nearby human character. You can do that by finding a safe room and leading your prey to it; then, the feeding part is actually a minigame where you'll have to drink enough blood to strengthen yourself without killing the human. Failing to do so will raise the level of suspicion, which in turn grants negative Traits to your character. Depending on the success and impact of your actions, it is also possible to acquire positive Traits; additionally, Talents are permanent bonuses that can develop if you've been focusing on a specific playstyle, allowing your character to be better at a Skill or Discipline.

But the breadth of RPG systems doesn't stop here. Even NPCs have their character sheets in Vampire: The Masquerade - Swansong, and you'll be facing off against their stats (including their own Disciplines, if that character is a vampire, too) during dialogues, which are this game's version of combat. If there is a tie between the two characters' stats, it will be resolved with a dice roll, in a nod to the tabletop game. The most intense dialog fights, called Confrontations, will only allow you a low amount of missed attempts before things go the other way, leaving your character to deal with unfavorable results. 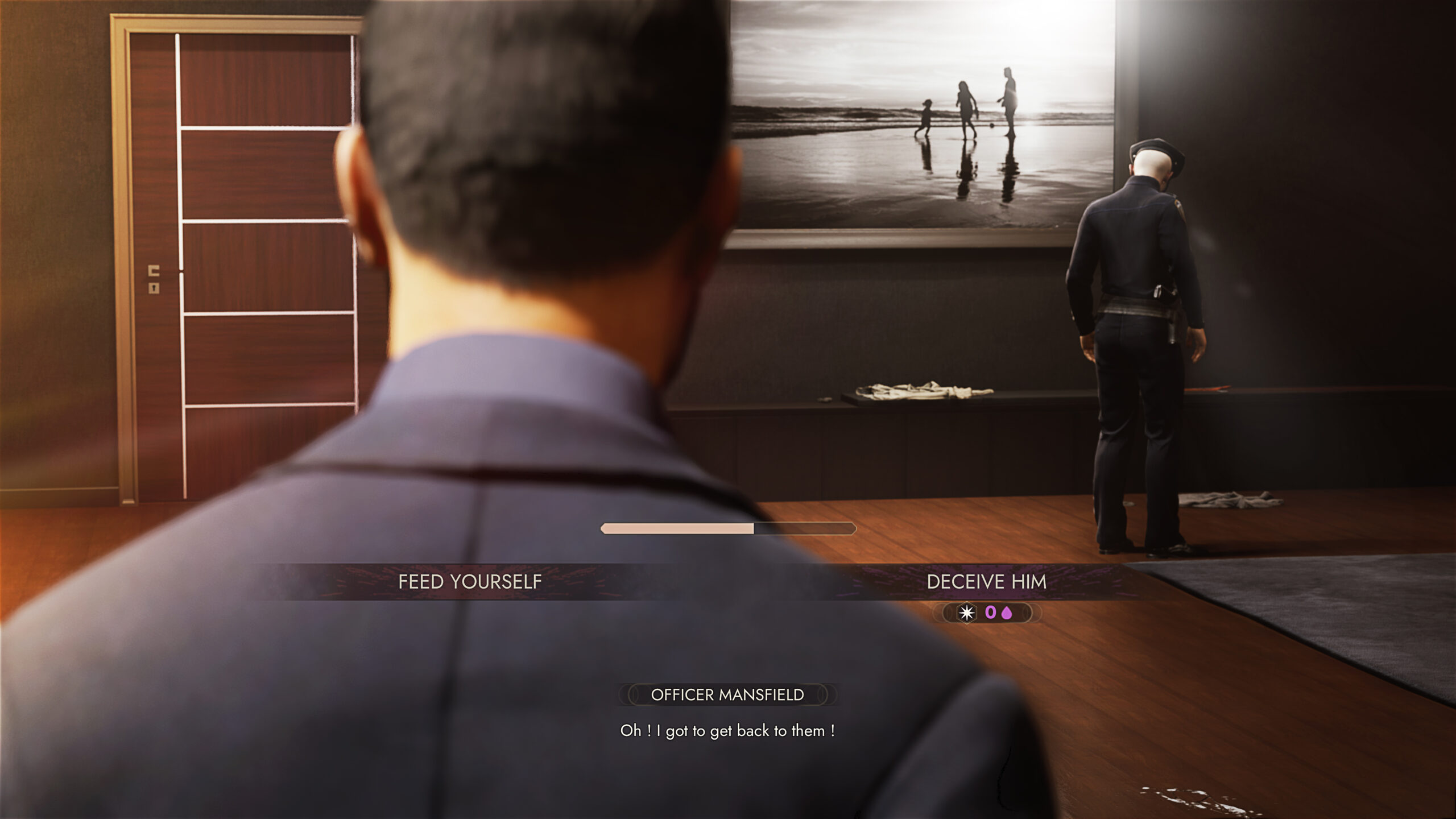 When it comes to the story, the developers consider it a conspiracy thriller where you will get to explore, investigate, and manipulate with the ultimate goal of uncovering a conspiracy threatening to destroy the Boston vampire society.

In the preview session, I played as Galeb, one of the three protagonists of the game. A vampire of clan Ventrue, Galeb is sent to investigate the scene of the supposed murder of a broker who handled the business of the Camarilla, the secret organization of vampires that strives to uphold the Masquerade as a means of protecting all vampires from humanity.

In this mission, Galeb is disguised as an FBI officer and gains access to the crime scene already brimming with police. At the behest of the new vampire Prince of Boston, Hazel Iversen, his first goal is to secure all of the broker's files on prominent vampires.

The moment-to-moment gameplay plays a lot like the Sherlock Holmes games in that you have to investigate all of the environments and talk to every character to learn about even the smallest details. I spent about 90 minutes wading through the entire broker's house and talking to every NPC, eventually managing to gather the aforementioned files, but if not for the preview chaperone, I would have gone ahead without discovering that - mild spoilers ahead - the broker was actually alive all along, hidden inside a safe room. That was an interesting discovery, as it led to a better showcase of some of the systems discussed earlier.

Once you get a hold of the broker, you need to escort him outside without too much collateral damage. It is no easy feat as the police officers try to stop Galeb, forcing him to use his powers. But because I had previously used the Dominate power on an officer, the Hunger level was already dangerously high, and Galeb began showing difficulties containing himself. Eventually, I decided not to use other powers, which led to a firefight confrontation where the broker died. But it is also possible to succeed in the extraction and then succumb to the Hunger, leading Galeb to recklessly feed on the broker until his death.

Like in The Council, Big Bad Wolf promised a strong emphasis on choices and consequences, thanks to a branching narrative featuring many different paths and endings. While I couldn't possibly speak of any far-reaching consequences, having played a single mission, the preview already demonstrated that there are plenty of short-term ones, at least.

From a technical standpoint, Vampire: The Masquerade - Swansong didn't exactly shine. Granted, the preview was conducted through Shadow (the cloud streaming service), which made everything look blurrier. But even taking that into account, the overall level of detail seemed relatively modest for an Unreal Engine 4 game, and performance was far from perfect, too. While facial animations are rather well done (understandably so, given the game's strong focus on dialogues), the same cannot be said for the stiff movement animations. It is unclear whether this was a recent build or not, though.

Either way, it won't be long before Vampire: The Masquerade - Swansong launches on PC (Epic Games Store), PlayStation 4, PlayStation 5, Xbox One, Xbox Series S|X, and Nintendo Switch. While it may not satisfy every Bloodlines fan due to its lack of action combat, Swansong certainly looks worthy of attention for anyone who's into vampires and narrative RPGs.