Vampire: The Masquerade is among the greatest tabletop role-playing games released in the 90s. With its amazing setting, which features vampires living in the real world and attempting to live by the Masquerade, a vampiric law designed to ensure humans never learn of their existence, it is not surprising to see that not only the tabletop RPG is still going strong (its fifth edition having been released in 2018), it is also attracting plenty of videogaming adaptations. 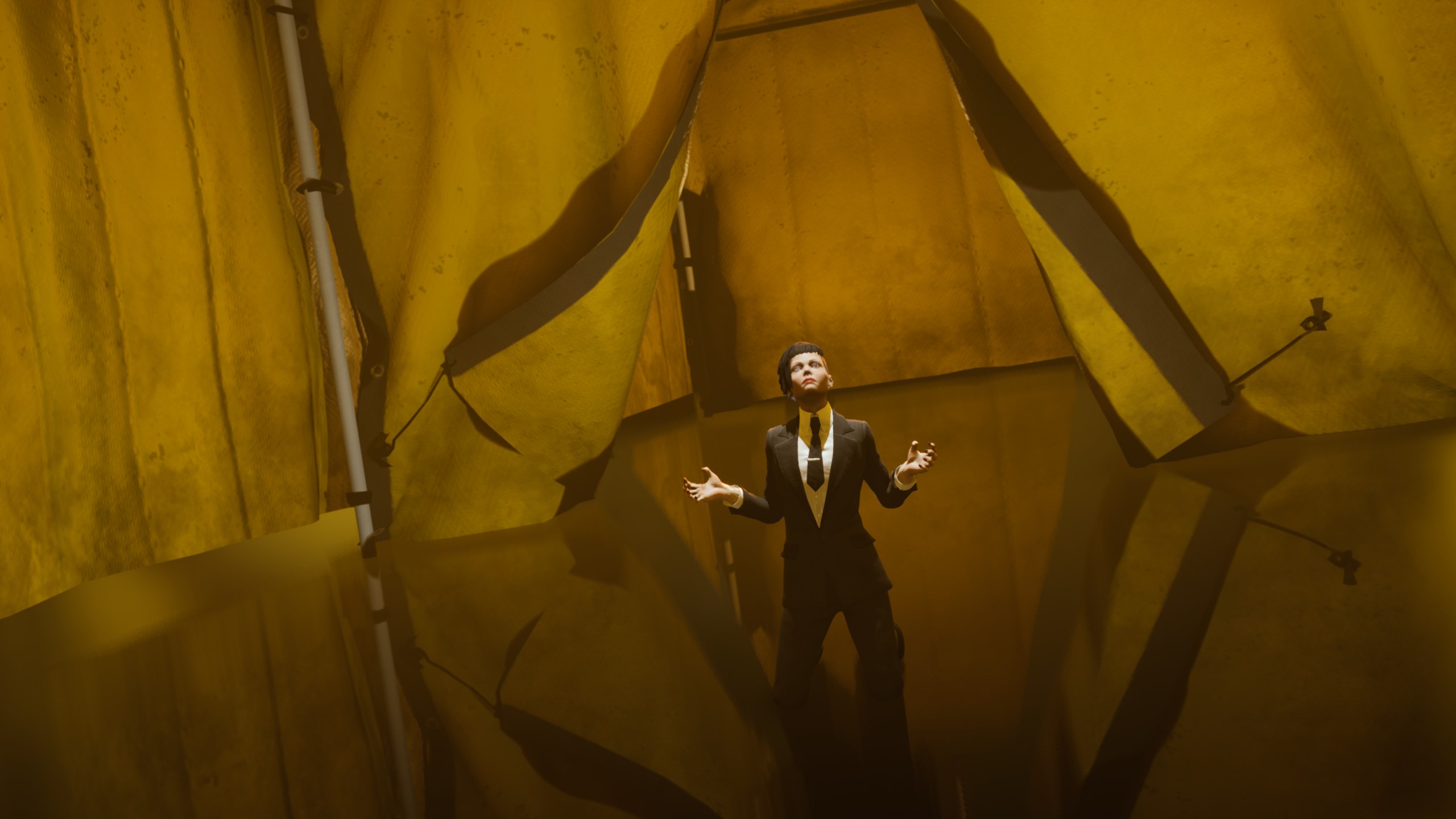 Vampire: The Masquerade – Swansong is set in Boston. Hazel Iversen, the new Prince of the Boston Camarilla, the most organized vampiric sect in the world, is an ambitious and determined vampire who aims to increase the power of her sect while strictly upholding the Masquerade. An alliance with the Tremere Warlocks is secured at one point, and a celebratory party is hosted to work out the details of this alliance. Something, however, goes very wrong at this party, and unknown individuals have ruthlessly killed attendees.

Fearing the involvement of the Primogen, a group of powerful Camarilla vampires who rose her up as their new leader, Hazel Iversen summons three vampires: Leysha of Clan Malkavian, Emem of Clan Toreador, and Galeb of Clan Ventrue, to investigate what happened at the party and discover who it was that betrayed the sect. Nothing, however, is as simple as it seemed on the surface. The three vampires will make some important discoveries that will impact the Camarilla and even other vampiric sects and factions in very significant ways.

There are many reasons why the Vampire: The Masquerade – Swansong story is highly engaging. The way the story is presented is excellent, and so is the pacing, as it keeps players on their toes with new elements that are introduced constantly. Writing is also quite solid and fits in nicely with the dark and dangerous world of Vampire: The Masquerade, as no character interaction, piece of information, or small lore exposition is worded in a way that feels out of place. Being a narrative-driven game, it was imperative to get all of this right, and the developer proved to be up to the task.

If you're wondering whether the Vampire: The Masquerade – Swansong story wraps out satisfactorily, that is a little more complicated to explain. Unlike most narrative-driven games, Swansong features a lot of different endings, and the choices the player makes during the game influence not only the story's ultimate ending but also character and faction-specific endings. The one I did get was satisfactory enough, and I will eventually play through the game again to see if any other ending is possibly even better.

Characters in Vampire: The Masquerade – Swansong are just as good as the story is. The main trio is unsurprisingly the most developed, but many of the side characters are nicely developed as well. One thing the game does extremely well is providing additional details on important characters via their relationships, as almost everyone in Vampire: The Masquerade – Swansong is somehow connected to another important character, creating a very complex network of relationships that make the Camarilla vampiric clan feel incredibly realistic and alive. It can be challenging to keep track of all the terms, concepts, and factions of the Vampire: The Masquerade world if the player has never played the tabletop game or any other video game based on it. Thankfully Swansong features an extensive codex that provides all the required information to better understand this complex universe. It can feel a little overwhelming when you are introduced to new concepts every few minutes, especially at the start of the game, but things improve later, as this happens less often past the first chapter. 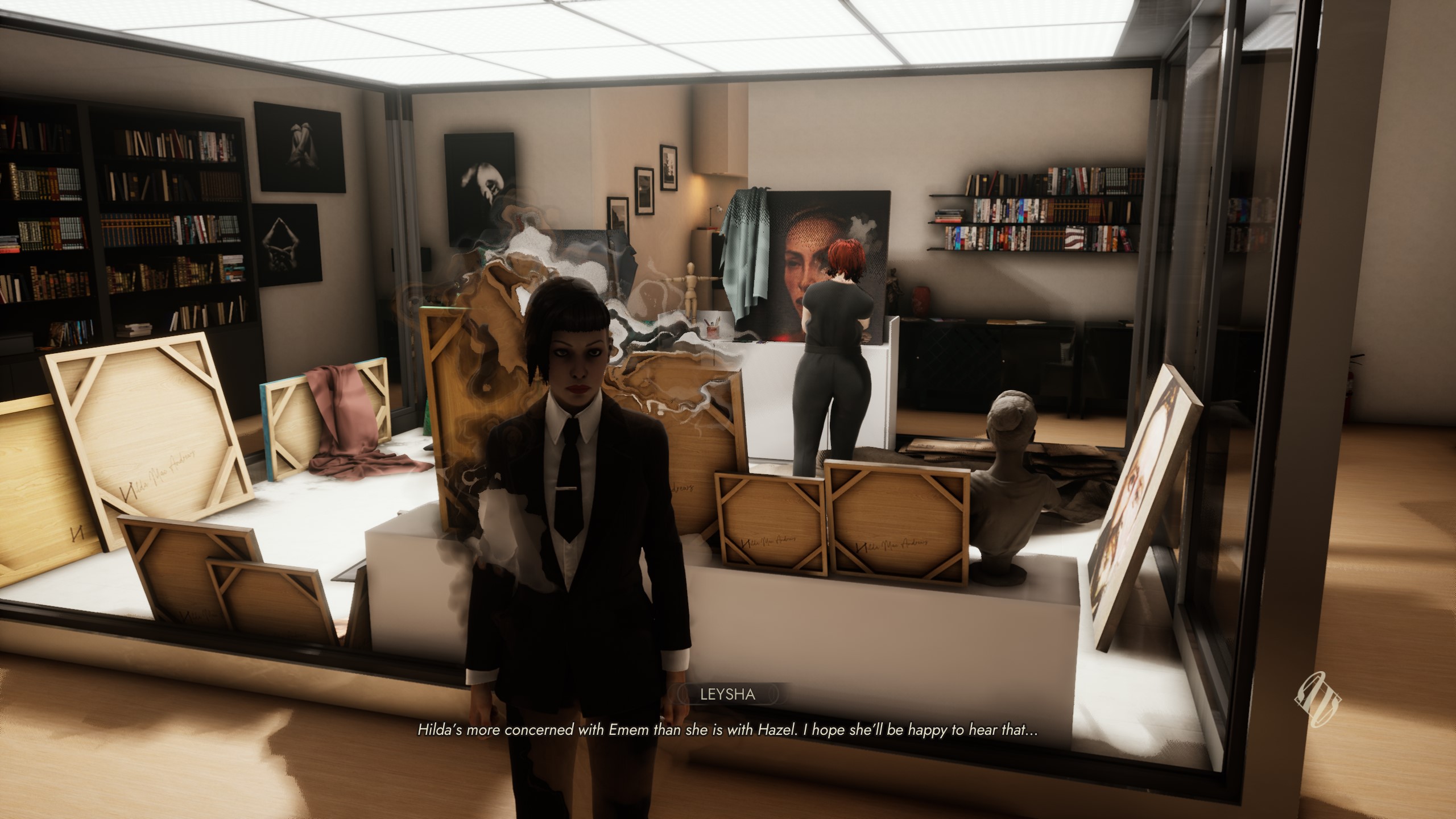 With such a compelling and well-written story, Vampire: The Masquerade – Swansong would have been an awesome narrative-driven game even if it featured run-of-the-mill gameplay that did not offer anything new over similar games. Big Bad Wolf, however, went all out indeed by introducing features inspired by RPGs that make the experience much deeper and much more involving than most narrative-driven games.

On the surface, Vampire: The Masquerade – Swansong doesn't play that differently from many other narrative-driven adventure games. Controlling the three main characters as the story dictates, the players explore a variety of closed-off locations in search of items and clues required to complete the main objective. All three main vampires have some very peculiar abilities to help them in their quest. These can be used during these investigations to reach otherwise unreachable areas or become able to see and follow the trail left by a person, and so on. Among these abilities is the ability to turn invisible, which, in turn, makes it impossible to interact with the environment, and the ability to change the outfit on the fly to access more areas and make select characters more inclined to share information with the vampires. This, however, comes at a price, as these abilities are powered by blood, and the more they are used, the more hunger will increase, and making it go past a certain threshold will make it more difficult for the vampire to control their urges.

For this reason, all three main characters will eventually have to feed. This is accomplished by completing a straightforward QTE event that gives players the choice to completely drain their victims' blood or leave them alive, possibly to feed again later in the chapter if the need arises. Killing them, however, will assign a negative Trait to the character, which could get in the way and increase Suspicion, which will also impact the current chapter by making the opponents you meet more skilled. As you can see, choice is the name of the game in Vampire: The Masquerade – Swansong, and not just when it comes to feeding. 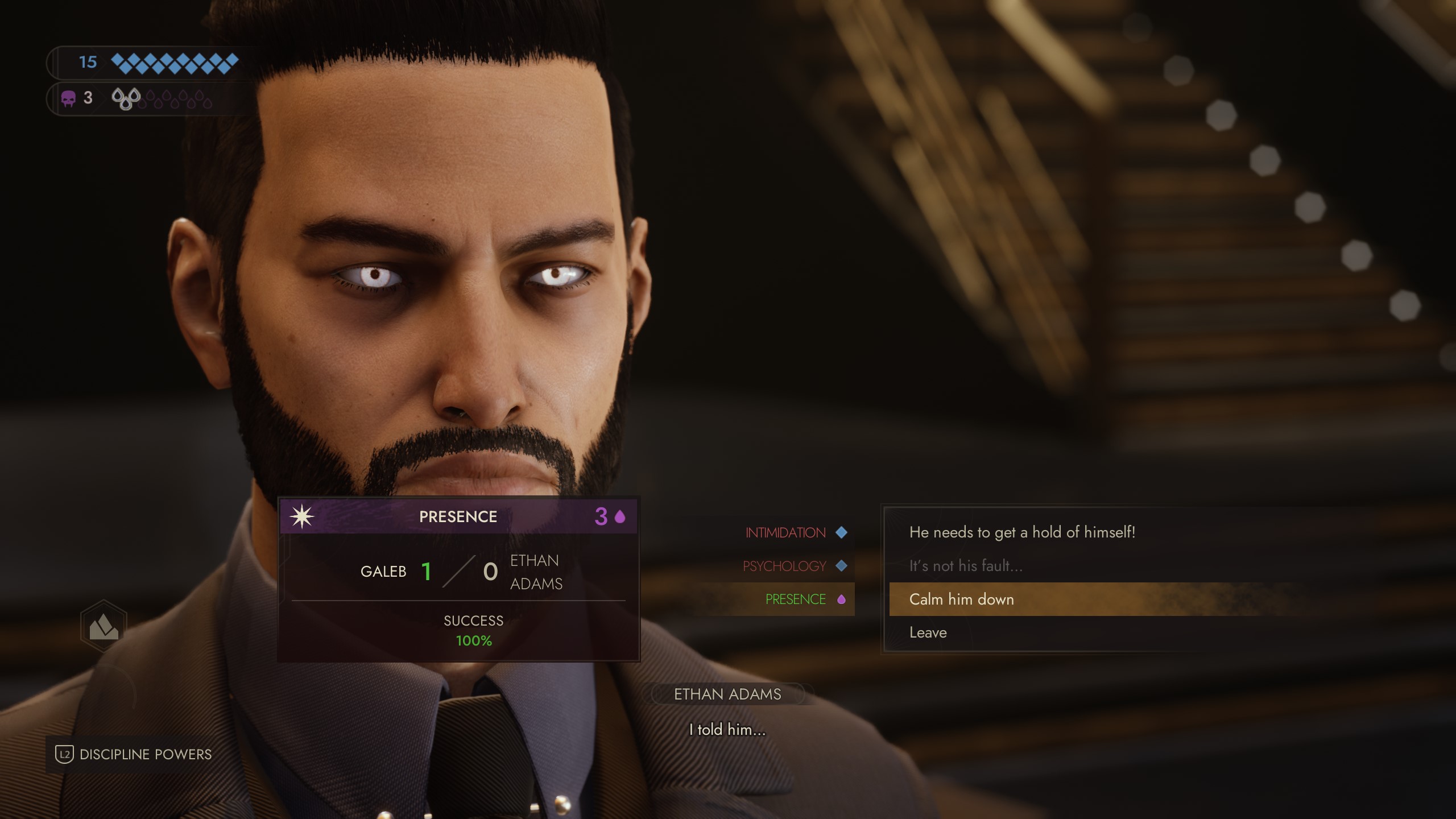 The narrative-driven experience of Vampire: The Masquerade – Swansong is augmented by some deep and well-made role-playing game mechanics that essentially dictate how characters approach the game's unique take on combat. Combat is actually the wrong term for it since Vampire: The Masquerade – Swansong doesn't feature any, and the only possible form of confrontation is through dialogue choices. During the game, you will often be presented with different dialogue choices that are only available if specific attributes are high enough. Having them available, however, doesn't mean that they will work one hundred percent of the time, as the other NPCs also have stats that dictate how well they can defend against your choices. In addition, it is possible to use Willpower to activate Focus, which will increase the chances of your choice being effective. NPCs, however, can do the same, so players will need to use Willpower sparingly, considering it can only be restored slightly, and more may be needed later. Among these unique dialogue fights are Confrontations, whose outcome influence how the story will play out, making it more important to have Willpower on hand to win them.

As mentioned above, all three main characters in Vampire: The Masquerade – Swansong come with different Attributes - Physical, Social, and Mental, and they can be enhanced freely at the start of a story chapter by using experience points that have been accumulated in the previous chapter by fulfilling the main goal and completing side objectives. At the start of the game, it is possible to either pick between three different profiles that will distribute experience points automatically, or distribute said experience freely between Attributes and Disciplines, three vampiric powers that are further developed by a surprisingly big skill tree. There are plenty of possibilities that are more or less effective, so players can customize and build their characters freely without having to worry about making bad choices. The different possible builds and the options they unlock can lead to different outcomes and endings, giving Vampire: The Masquerade – Swansong an unprecedented replay value for a narrative-driven game.

While the role-playing game mechanics make Vampire: The Masquerade – Swansong the game it is, it would honestly have been an excellent story-driven adventure even without them. The game doesn't feature any sort of handholding, lacking even something like a quest log, so taking actual notes is extremely encouraged, as seemingly useless information may become useful later on. An excellent approach that improves the game on all fronts, but that may leave less experienced players somewhat lost. 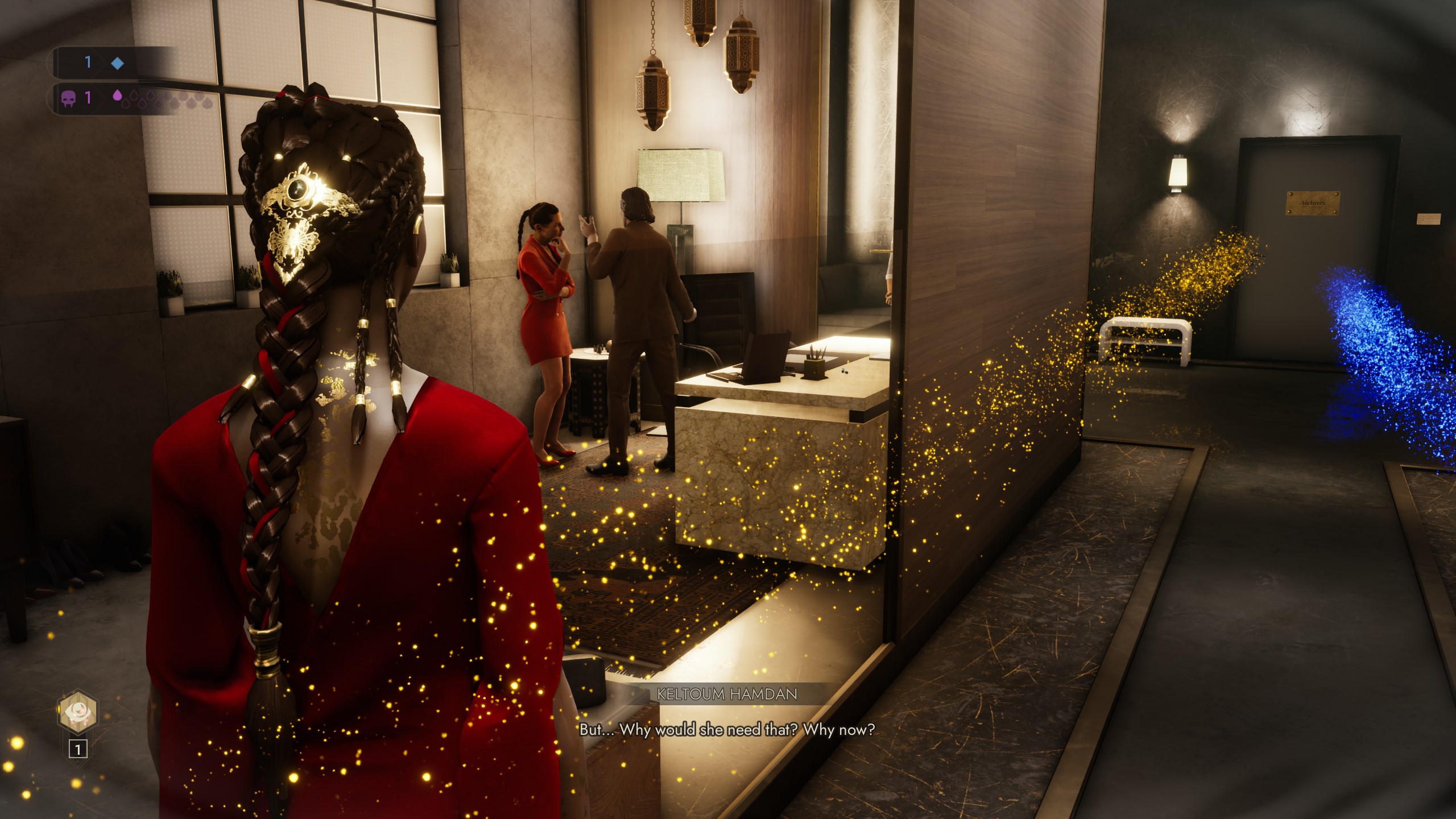 Unfortunately, not everything about Vampire: The Masquerade – Swansong is excellent. While visuals aren't bad by any means, some things could have been handled better, facial animations above all. They honestly look pretty bad, and they damage the experience quite a bit. In a game where atmosphere and immersion are of the highest importance, having characters make some weird faces during dramatic events can only detract from the entire experience. The rest of the visual elements do fare a little better, as the environment and character models are detailed enough. The competent use of lighting makes the world feel threatening and mysterious, even if the main characters are exploring seemingly regular locations like houses.

Vampire: The Masquerade – Swansong isn't a particularly demanding game and should have no trouble running decently on relatively modern systems. The machine used for the test (i7-10700 CPU, RTX 3070 GPU, 16 GB RAM) had no problem running the game at 4K resolution and 90-100 FPS. Players equipped with an NVIDIA RTX GPU can also use NVIDIA DLSS to improve performance without impacting visual quality too much. The game features a good selection of graphics settings to tweak, so it isn't complicated to strike a good balance between visual quality and performance. One thing I have to highlight, however, is the absence of a FOV slider, which I feel should have been included, as the default value is too low for some sequences that may induce motion sickness. In my time with the game, it got so severe that I had to stop playing the game a couple of times, and I rarely suffer from motion sickness in third-person games.

Even though the visuals and facial animations, fundamental elements in a narrative-driven game, could have been better, there is no denying that Vampire: The Masquerade – Swansong is not just an excellent narrative-driven game featuring an incredibly engaging tale that is told exceptionally well, compelling characters, and solidly implemented role-playing game mechanics, but also a groundbreaking title that no fan of the genre should pass on.

With its intricate and well-realized setting, engaging story, compelling characters, and well-implemented RPG mechanics, Vampire: The Masquerade – Swansong is a truly groundbreaking game that no fan of narrative-driven games should pass on. Some aspects could and should have been better, such as facial animations, but there is no denying that Big Bad Wolf has done a terrific job creating what is not only one of the best Vampire: The Masquerade games, but also one of the best narrative-driven games seen in recent years.