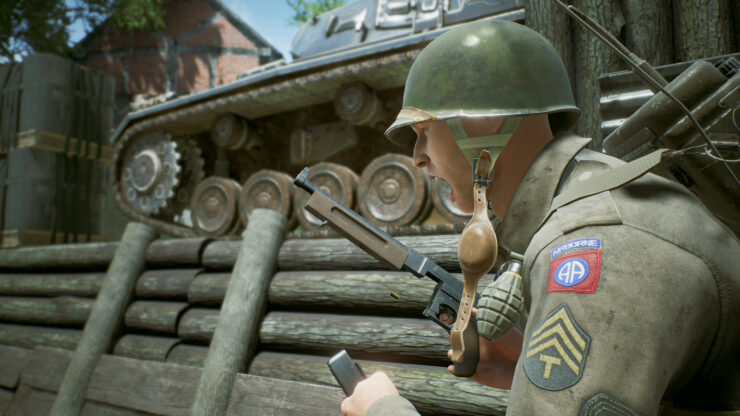 Remember Battalion 1944, the World War II-themed first-person shooter developed by Bulkhead Interactive (the makers of The Turing Test) and funded on Kickstarter? Well, it's finally about to hit Steam Early Access on February 1st. Before that, though, a beta weekend will take place between January 19th and January 21st

Kickstarter or Humble Bundle backers will automatically gain access to the beta (which isn't covered by Non-Disclosure Agreement, so you can stream and talk about it without any issue), while everyone else may apply here for a chance to be selected.

It feels good to get Battalion 1944 into the hands of gamers after working on it so hard. We’ve been testing the game behind closed doors with our Kickstarter backers. It’s now time for us to extend our testing to Early Access to help what I believe can be one of the best competitive FPS games ever.

We’re going to be using the beta to run domination on the Manorhouse V1 map, as well as showing off our new competitive mode ‘Wartide’ on the map Liberation. It’s one last chance for us to test out our wares with FPS players before we make the leap to Early Access.

Getting to grips with the intense nature of the Second World War is something that’s been key to our process. That’s something I also think comes across in this new reveal trailer - the action in a Battalion 1944 encounter is as feverish as it is credible. We’ve looked to bed the play down in maps that are both competitive and authentic, for which our trips to Normandy proved immensely useful.

There will be six multiplayer modes available when the game hits Early Access on Steam. This phase of development has been estimated by Bulkhead Interactive to last roughly a year; as for the price, it will be 14.99 dollars/euros or 11.99 pounds if you're in the UK.

Hunt: Showdown is Getting a Steam Early Access Release