It seems the Batman Arkham franchise may be done for. Of course, Batman: Arkham Knight was supposed to be the series’ grand finale, but the video game industry rarely lets anything successful die, and rumors of a new Arkham game have been bouncing around for years now.

That said, those rumors have shifted recently – as we reported a few weeks back, it's now rumored the new Batman game in the works at Warner Bros. Montreal is ditching the Arkham name and continuity in favor of a soft reboot.

The new Batman game will kick off a new, somewhat cohesive DC Game Universe. Shortly after it’s release this fall, it will be followed up by a next-gen DC game from the creators of the Batman: Arkham franchise, Rocksteady Studios. The roadmap from there is foggy -- sources have said that a next-gen Superman game (not Rocksteady) is also in the works at WB, but nothing confirmed yet.

Well, now we may have a bit more evidence the new Batman will, in fact, be a reboot. Apparently a senior producer working at Warner Bros. Montreal posted this to LinkedIn (Wccftech has confirmed the information is legit)… 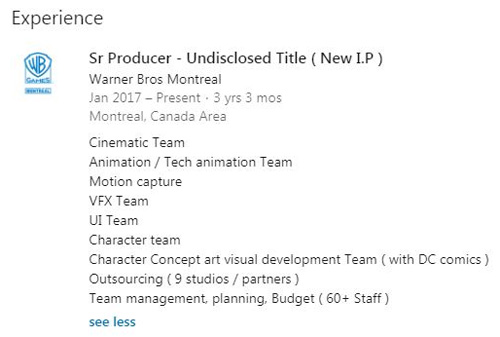 Note that they specifically say they’re working on a new IP. Take this all with a grain of salt if you must, but it sure seems like the reboot rumors are legit. So, beyond it being a new IP, what do we know about the new Batman game? Well, nothing officially, but rumors were WB Montreal’s game would focus heavily on the “Bat Family” including Damian Wayne, and would feature The Court of Owls as its main villains. Per insiders, this will still be the case for the rebooted Batman game.

Now that I’ve talked to multiple people on it... the new Batman game does seem to be a reboot. The name also changed during development. On the bright side, the Court of Owls is still a big focus, as I said before.

So, when will Warner Bros. finally unveil their next Batman game? That I can’t say, but it does seem like an announcement may be coming fairly soon. What are you hoping for from the big bad B-man’s next game?