Nvidia has just released a second video for Batman Arkham Knight which details the incredible effects NVIDIA GameWorks brings to the Batmobile. 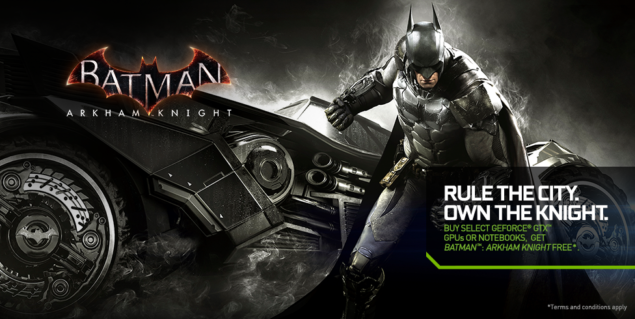 Destructible objects such as fences, guard rails, and trees fall to pieces when you run into them. Smoke and fog pours out of the Batmobile, as you race and fight your way through the streets of Gotham.

The video demonstartes how NVIDIA GameWorks' GPU accelerated Interactive Smoke & Fog PhysX effects greatly enhance Batman's armored ride and its weapons. Like the effects shown last week, each can be manipulated by movement, environmental conditions and external forces, and move realistically around and across surfaces. This is particularly evident when the Batmobile simultaneously attacks and moves, affecting the smoke from its canon and missiles. The video also gives a better look at the particle shadows cast by Batmobile GPU-accelerated tire smoke, which further increases image quality.

You can view NVIDIA's first Batman Arkham Knight GaneWorks video below, as well as the effects presented further down: 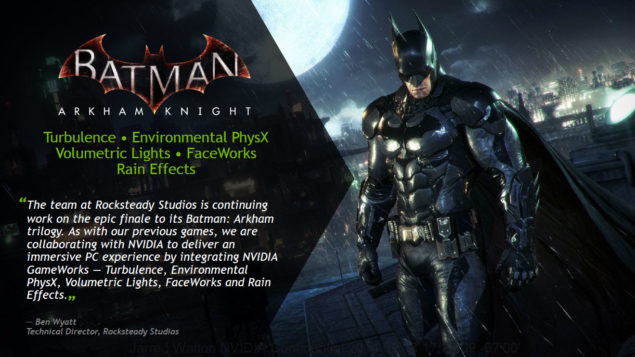 Batman Arkham Knight pre-loads are open on Xbox Live, and we finally get to learn the download size of the title. Rocksteady also released trailers for both the Harley Quinn Story Pack and the Red Hood Story Pack, and they both feature some great gameplay glimpses of the two characters in action.