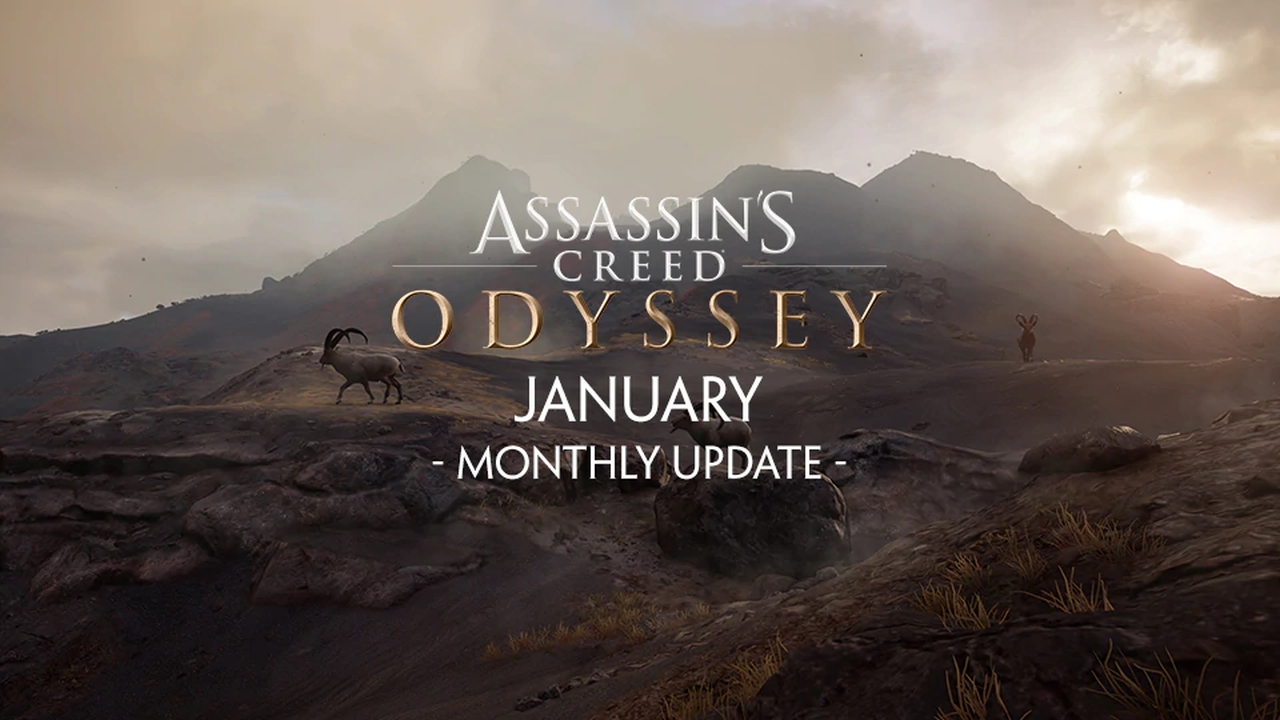 Take a look at the trailer below.

The Legacy of the First Blade – Episode 2: Shadow Heritage

Continuing the story arc from the first episode, Hunted, in the second instalment you get to investigate a blockade initiated by the Order of the Ancients around the port city in Achaia. You'll discover a group of stranded citizens whose lives are being threatened by a fierce naval commander, the Tempest, who is in charge of the blockade.

Steal the Tempest's top secret weapon, help the citizens escape, and destroy the blockade once and for all...with your ship! An epic maritime battle awaits you at the Aegean Sea.

Shadow Heritage will be available starting January 15. To start Episode 2 you need to complete the first episode, Hunted, complete the Naxos questline in Chapter 7 of the main story, and be at least level 28.

THE LOST TALES OF GREECE - DAUGHTERS OF LALAIA & POET'S LEGACY

In Daughters of Lalaia, you will go to a village where the men have left for battle, leaving the townspeople and their children defenseless. Responding to their request, you'll train them to prepare for incoming danger.

This is no easy task, as you will be confronted with choices that will determine the survival of the village.

To get started, travel to the Phokis Region after reaching Chapter 5 of the main story path. The first quest is called A Gathering Storm, and we recommend that you are at least level 13.

In Poet's Legacy, you'll meet Greece's most scandalous poet. During this questline you'll learn that she isn't quite what she seems as you become increasingly involved in her risqué performances.

To get started, reach Chapter 5 of the main story and make your way to the Boetia region. The first quest is called Praxilla's Admirer and we recommend that you're at least level 34.

Behold, the mighty Arges will soon rise! Face the legendary Cyclops known as the Bright One, and get your chance to win his legendary weapon, the Hammer of Hephaistos.

He resides on a Volcanic Island in the Angry Caldera of Arges which you can fast travel to with the additional markers added to the map in the 1.1.1 Title Update.

This is an endgame challenge in Assassin's Creed Odyssey, so we recommend that you are at least Level 50 when attempting to face Arges.

We're happy to announce that Aya from Assassin's Creed Origins will be joining the ranks of your Adrestia as Legacy Lieutenant!

Keep an eye on the Ubisoft Club social pages later this month to ensure you don't miss the arrival of the Egyptian Assassin.

With Dionysos' Character Pack you'll become the most stylish misthios, dressed to impress for any occasion. The Dionysos Character pack contains a gear set, mount, and a legendary dagger.

Later this month you'll be able to get your hands on the Athena Pack. Like Phidias's grand statue of Athena, this pack really impresses a crowd.

We continue our efforts to provide the best possible experience to you by adding additional features to the game, some of which we've detailed below.

Many of you already proved yourself victorious over dozens of Mercenaries and successfully claimed the prize for fighting your way to the top. Are you ready to defend your title? Good! Two more tiers have been added to the Mercenary Ladder, which will reward you with new benefits worthy of a demigod...if you can conquer them!

With the next Assassin's Creed Odyssey Title Update, we'll be adding an all-new vendor to the game. You can expect the following services from him:

Upgrade – You can upgrade your gear to Engravings Tier 6 and 7.

Engrave – As you would expect from any blacksmith, you can also engrave gear at Hephaistos's Workshop.

If you'd like to pay him a visit, Hephaistos's Workshop can be found in the Myson Cave in the Malis region. Should you be in an emergency-engraving kind of situation, you can fast travel to the nearby Ruins of Artemis location.

As Markos always says "Everybody benefits!"

One of the most community-requested features since launch is coming this month. With the next update you will be able to adapt enemy scaling settings to your preferences.

As soon as the update hits Assassin's Creed Odyssey on January 10, visit the options menu and find the Level Scaling setting. From there you'll be able to customize how drastically the enemies will scale to your level.

Please bear in mind that this option won't be available in Nightmare Difficulty Mode in order to maintain that mode's challenging nature.