Apple announced the release of their subscription-based TV service Apple TV+ yesterday. It will launch on November 1st and is priced at $4.99 per month per family. Today, a report by Bloomberg tells us that the service will be available in the Indian market at an even lower price of $1.40 (Rs 99) per month.

Like users in other regions, Apple TV+ will be free for a week and a year’s subscription will be on Apple for people who purchase an iPhone, iPad, Apple TV, Mac, or iPod touch. Some of the Apple TV+ originals include The Morning Show and See, For All Mankind, Dickinson, Helpsters, Snoopy in Space, Ghostwriter, The Elephant Queen, and a mystery Oprah Winfrey project.

Even Netflix recently launched a mobile-only plan in India that retails at 199 rupees (USD 2.80). Alternatively, Amazon offers its monthly Amazon Prime video membership for 129 rupees (USD 1.80). Apple TV+ is far cheaper than its competition, making it a formidable competitor in the Indian market, which is already chock full of both international and locally hosted streaming services.

The reduction in price will very likely come at the expense of content. It'll be interesting to see how much of the promised Apple TV+ content is available in the Indian market. Netflix in India costs more or less the same as it does globally, but there is a lot less content, presumably due to licensing issues. 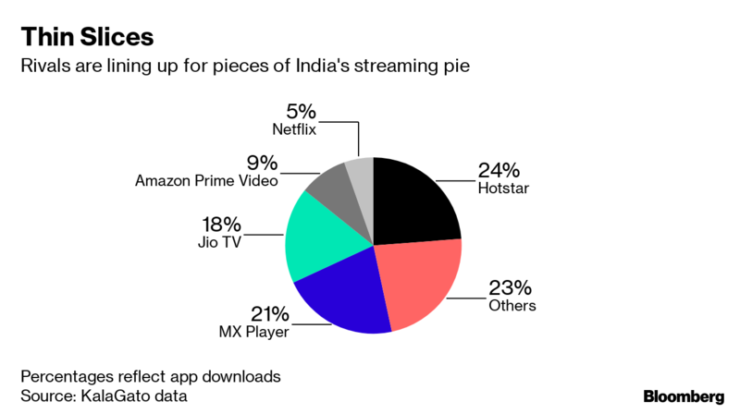 Getting into the Indian market, however, will take more than just a low subscription fee. As shown in the infographic above, Disney-owned (technically Star India, but Disney owns Star India) Hotstar is already dominating the market as it offers a unique blend of locally-produced content, sports, and US television programs. The most surprising entry here is MX Player. For those who don't know, MX Player was just a video really popular video playback app. Last June, an Indian company acquired it and announced that MX Player would double up as a video-streaming service and create original content in India. Still, I'm excited about Apple TV+ making its way to India at the reduced price and can't wait to try it out once its released.