With its expensive price tags and lowered sales, Apple’s biggest revenue generator, the iPhone XR, iPhone XS, and iPhone XS Max have not been performing as well as they should. The iPhone XR was supposed to guide more than 50 percent of shipments for this year according to recent reports, but it looks like Apple might not have anticipated the plunge in sales.

To bolster those revenue numbers, Apple introduced trade-in promos where you could give an iPhone model as old as the iPhone 5 and get the latest and greatest 2018 version. The tech giant has now provided pricing comparisons, revealing that it wants more customers to shift to the new series as quickly as possible.

In the updated web page, you can see the iPhone XR, iPhone XS, and iPhone XS Max alongside their respective prices. Future customers are given the option of selecting one of thirteen eligible devices to trade-in, meaning that any iPhone launched between September 2012 and September 2017 is eligible for trade-in. Once chosen, the page automatically deducts the device’s trade-in value from all three current-gen iPhones. 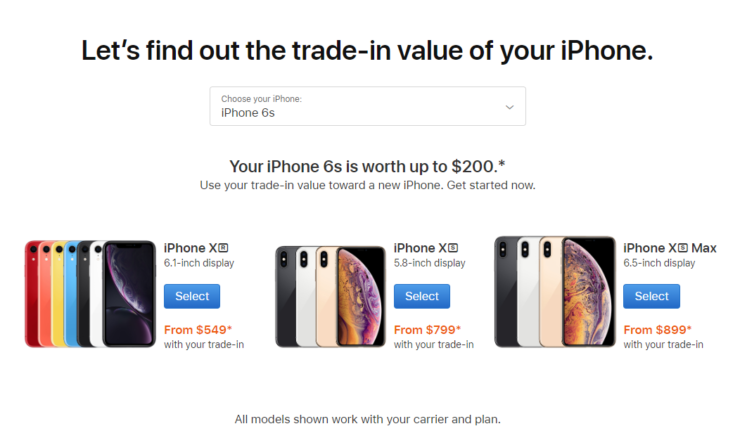 For the time being, Apple is offering extra trade-in credit when an iPhone 6, iPhone 6s, or iPhone 7 model is replaced with the iPhone XR, iPhone XS, and iPhone XS Max purchase. This offer has been valid for a significantly long period, and it should be noted that it was advertised as a limited-time offer. Apple has not confirmed when the offer will expire but if the company is continuing this deal, it might mean Apple will be keeping it active till the end of the year.

Apple is not having the best time when it comes to iPhone sales, and if you’d like to learn more about the company’s progress in the market, you check out our previous coverage below.