Apple Announces New ‘iPhone Upgrade Program,’ Here’s What It Is About

Apple's iPhone 6s event was jam packed with a lot of amazing announcements, and the icing on the cake proved to be the new 12.9-inch iPad Pro as well as the new Apple TV. But apart from that, Apple made smaller announcements as well, and one of those was the 'iPhone Upgrade Program.' If you're wondering what the fuss is all about, we've got the details right here in one place. 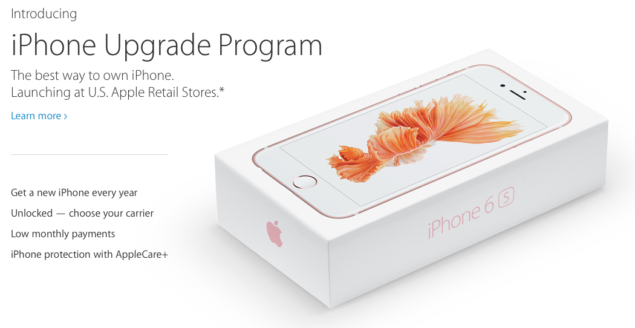 Starting in the United States at first through the company's very own retail stores, Apple's new 'iPhone Upgrade Program' is crafted for those individuals who want to upgrade to the latest and greatest iPhone every year.

To start off with the program, you first get to pick the handset of your choice along with the carrier you see fit to use it on. The handset you'll be getting will be completely unlocked, allowing you to freely switch between carriers if you so wish. Moving on, if you're planning to grab yourself an iPhone 6s, then you'll have to shell out $32.41 per month for the base, 16GB model, while the 64 and 128GB offerings will set you back $36.58 and $40.75 a month, respectively.

You can spread these costs in a time period of 24 months.

To sweeten the entire deal even further, Apple will throw in its award-winning AppleCare+ warranty with your purchase as well.

Apple's new program is a great way to finance yourself for the latest and the greatest smartphone from Cupertino, and if you're interested, you can make your reservation online at 12:01 PDT this Saturday, which happens to be the 12th of September, the very same day iPhone 6s pre-orders go live.

If you're looking to buy the iPhone 6s or iPhone 6s Plus directly from a carrier, then you'll be pleased to learn that the new handsets carry the same pricing structure that the iPhone 6 and iPhone 6 Plus did on a two-year contract. In case you've forgotten what that was, then here's a complete breakdown of it.

If you're in the ownership of an older iPhone model, then it's the right time for you to upgrade. And given the fact that Apple has launched its iPhone Upgrade Program, you no longer have any reason to stick to an older device, until or unless you've forced it upon yourself to keep on using legacy hardware.

Hit the source link below for more details on the iPhone Upgrade Program.